Hobby Farms readers share their stories of luck on the farm. 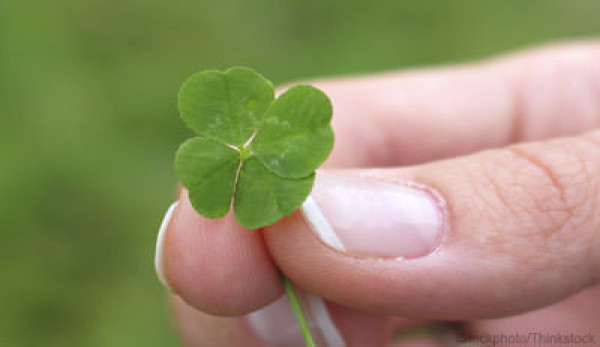 In March, we ran the¬ÝLuck o‚Äô the Farmer contest on HobbyFarms.com, and received an overwhelming response from you, our readers. You sent in so many stories of luck on the farm‚Äîwhether it was dumb luck, beginners luck, tough luck or something in between‚Äîand we couldn‚Äôt help but share a few with you here. Some of these stories will make you laugh, while others will have you counting your blessings, but we‚Äôre pretty sure you‚Äôll be able to relate to at least a few.

Winning Entry: Angela Carrigan
Irvine, Calif.¬Ý
It was¬Ýkidding season on the farm. Hearing a baby goat screaming because he had wandered too far from mom was common. On this night, the sound broke my heart. I alerted my other half to go check because this one “sounded little.” He went to check the goats. He never found the “little one” who was making a racket; instead, he smelled smoke. There was an electrical fire just beginning to flare up. That phantom cry and our compassion saved the farm. It was a windy night, and if he had not smelled the smoke and put out the fire, we might have lost the farm.

Runner Up: Gilbert Fowler
Ash Flat, Ark.
I had been seeing a black cat in the tractor shed in the early winter. I felt sorry for the cat, which was feral, so I started feeding it. I would put the food on the floor in the evening and sure enough, in the morning it was gone. Just last week, I took more food to the shed, placed it on the floor and called “kitty, kitty,‚Äù and I saw the black cat coming toward the feed. It being dark in the shed, I didn‚Äôt notice the white stripe on part of the cat‚Äôs back until it was about 10 feet away. At that time, I turned and ran toward the house, turned and saw the skunk eating the food I had put out for the stray black cat. I feel I was lucky that the skunk did not spray me.

Runner Up: Leah Fleming
Walkersville, Md.
While I’ve had my share of beginner slip-ups, none have been as disconcerting as realizing that you‚Äôve let your four dogs out repeatedly throughout the night and forgotten to close up the chicken coop. My dogs, you see, are typical prey-driven critters when they‚Äôre together. It only takes one wild bird to move too quickly and the dogs take up the chase. I discovered my error early in the morning and hoped that I‚Äôd be lucky and all of the chickens would be spared because they were still roosting.

I was able to get all the dogs back into the house but one. I held my breath and went in search. I started running when I saw a tail go past the coop door. When I got to the coop, though, my panic turned to laughter. It turns out that I was there to rescue the dog, not the chickens. Abigail was backed into a corner surrounded by 15 angry hens. Since then, my girls have proven to be a brave lot. They‚Äôve tamed the feral cat colony living under the garage and taught the dogs that they need to respect the chickens and our new rooster.

Maya Mazul
Dover, Tenn.
I woke up at 4 o‚Äôclock one morning to check my sac fry (we raise trout). I pulled my boots on, stepped out into the 30-degree-F weather and ran to the egg house, which sat about 20 yards from my house. When I reached the door, I twisted the door and swept the trough with a small flashlight in my hand. When my booted feet reached the ground, I saw it: a crawdad the size of my palm sitting in the bottom of the trout’s trough. I search through the myriad odd tools we kept in the house‚Äîturkey basters, scissors, pliers, staple guns‚Äîand found the net I needed. I chased the tiny lobster around the trough four times before my net caught him and only him. I placed him in a bucket and did an overview of my babies. I managed to calm myself enough to realize that most, if not all, of my trout survived the terrifying attack. I managed to save the most sensitive fish there is to raise. Definitely a lucky day!

Cathy Chaney
Colquitt, Ga.
A few years back, we were moving to Kentucky from Georgia. We had our trailer loaded with two goats, two bulldog puppies and 65¬ÝAustralorp hens that had just been given to us. We had traveled about 75 miles, and when we stopped at a traffic light, my husband noticed in his rearview mirror that there were chickens running loose in the trailer. We stopped at a local business and put them back in their cage. We wondered how many chickens we had lost along the road. We traveled straight through without spending the night anywhere, and when we arrived, we counted our chickens. We still had all 65 of some of the best layers that we have ever owned.

Kelly Adkins-Leach
Bumpass, Va.
We had left the wood stove door cracked to get a nice blaze going and forgot it was cracked. We went about our morning and I heard a loud roaring sound and saw that a piece of wood had rolled forward getting lodged on the frame and knocked the stove door open. If it hadn’t lodged itself on the frame, our house wouldn’t be here.

Peggy Stenglein
Pittsburgh
My lucky story comes from when I was only about 12 years old on our family farm. It was early spring, and we had two¬ÝJersey cows for milking. Dorothy, the ornery one, recently had a calf. I was terrible at wanting to pet the babies. My mom would tell me to be careful because a momma cow is very protective right after her baby is born, and if I got too close, she might see it as a threat, but I couldn’t help myself. The calf was just so cute!

One morning after milking, we were letting the cows back into the field, and I was standing in the barn driveway so they wouldn’t get the urge to go down the hill instead of up to the pasture. Dorothy let out this terrible noise, put her head down and charged me! I ran as fast as I could with her right behind me when I tripped on some tall weeds. I started to run again, but she scooped me up with her head and gave me quite a lift in the air (think Norman Rockwell paintings), my feet in front wiggling, but I landed on my feet and somehow ran faster. My mom did whatever it was she did and got the cows into the field and the gate closed, all while staying pretty calm! I had run up to my dad’s pickup truck that was parked behind the top of the barn, jumped in the bed, and wouldn’t come out until my mom assured me all was well. Needless to say, after that, I was very careful about petting baby anythings!

Sandra Yarborough
Leeseville, S.C.
We had just been given two new peacocks, King Quinn and Antonio. In a few days‚Äô time, they escaped from their pen and were gone. After two weeks of searching, there was no sign of them until one night a good neighbor called and said they found a peacock at the side of a backwoods road. Our neighbor and his friend were able to catch it. We felt very lucky to have one of the birds home and lucky to have such good neighbors willing to catch a peacock! We had to nurse the peacock back to health, as it was injured. Our luck didn’t stop there. Two weeks later, there was a sign at the side of the road that read, “Peacock found.” It had found a house with chickens and became friends with them. The man who lived there said the peacock would peek in his window and eat what vegetables he had left in his garden. The bird roosted at night in one of his trees. He was very patient with it, fed it and tried to find its home.

J. Kull
Pipersville, Pa.
It was a typical summer storm, and as is common in the country, the power was out. Lightning suddenly crashed nearby. Our neighbor banged loudly on the door, and Dad answered it. After some hustled words, they took off running as fast as they could. I rushed out to the driveway after them, wondering what was happening. When I reached them, I saw to my horror that our barn had been struck by lightning, and there was smoke billowing out from the roof! “Water! Get all the water you can find!‚Äù everybody was yelling. It wasn‚Äôt only the barn we were concerned about; it was also our goats and chickens in the attached pens. Mom rushed under the canopy of¬Ýfire and opened the pen to hurry the scared kids outside.

I looked up and saw the flames licking through the corners of the barn. That sight was forever glued to my memory like a photo glued to a scrapbook, it was so terrible. Buckets of water were grabbed from the animal pens, the dog‚Äôs kennel, and anywhere and everywhere we could find it. Mom retrieved the fire extinguishers. I hooked up the hose, hoping to get water, in spite of the lack of power to the well pump. It seemed impossible for the water to run for long. I heard Dad praying. I kept praying, over and over, every chance I got, sometimes silently, sometimes in a hoarse whisper. Mom later told me that she, too, was praying, but I don‚Äôt think anybody was praying harder than I was.

To my astonishment, a steady stream of water kept coming from the nozzle. Dad, flabbergasted, told me to see if the power was back on. I ran inside the house, and quickly came back to report it was still off. What if the walls give way? What if the water stops? What if ‚Ä¶ what if ‚Ä¶ what if! A thousand thoughts were running through my head. Again, Dad sent somebody to check if the electricity was restored, but the report was the same. There was no power ‚Ä¶ yet the hose was still running! The hose ran for a whole half-hour before the fire was out and the smoke subsided. We soaked everything in the barn, to make sure nothing would rekindle.

Melissa Monty-Provost
Plattsburgh, N.Y.¬Ý
Our farm offers a mobile petting zoo. We usually take a mini donkey, a couple of¬ÝPygmy goats and on this occasion, two newly acquired Shetland sheep. We were headed to a nursing home in the city. We were stopped at an intersection on a very busy highway when the trailer door opened up and out jumped one of our very expensive sheep. We had no idea and continued on to our job site. As we were driving slowly through the parking lot, we noticed one of our donkeys was walking around! Imagine our horror when we realized we were missing a sheep and had to corral the donkey. We had no idea someone who knew us caught our sheep at the intersection. We called all over and traveled the roads looking for her for hours. Finally, someone told us they knew where she was. We were incredibly lucky to have had a friend following us. By dark, everyone was home safe and sound!