Hens continue to lay longer than some people believe, and older hens play pivotal roles in a flock's hierarchy. 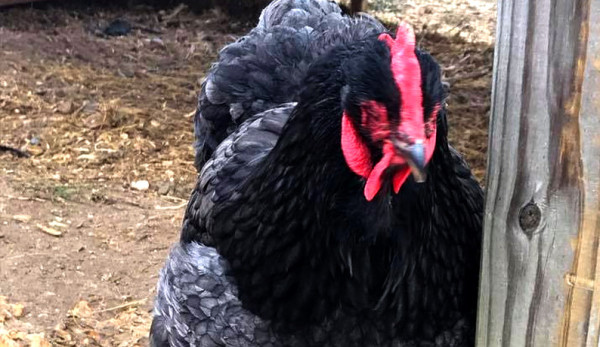 On Mother’s Day afternoon, I gazed from my bedroom window to view sunny skies, lush green grass and an immobile mound just feet away from our main Orpington coop. Being somewhat (OK, very) near-sighted, I squinted at it for a few moments, long enough to watch Davey Orpington approach the mound, gently bump it with his side, then slowly walk away from it, crowing loudly. The episode heralded what would turn out to be a sad occurrence indeed, but also a great reminder of the value of keeping older hens as part of a flock.

After seeing Davey Orpington’s reaction, I tore into the kitchen, grabbed my teen son, Jaeson, and begged him to please, please, please go see if that mound was perhaps Wilbur the Woodchuck and not one of our birds. Startled, he turned to look out our sliding glass door. “Oh, dear,” he said, slipping into his work shoes and heading outside. A few moments later, he came back, shaking his head sorrowfully. “It’s Diana, Mom,” he informed me sadly.

We went back out together, trailed by half a dozen curious clucks, where I confirmed that the mound of feathers was indeed Diana Cochin, one of our older hens. Gentle and shy in temperament, Diana was always the last to leave the coop in the morning. Her big, puffy bun and fabulously feathered feet had won her several awards on the competitive poultry circuit; she was quite frankly the most perfect standard Blue Cochin I’d ever seen. She was also our oldest hen. This June, she would have turned 7Â years old.

She was the oldest gal in our flock, but Diana could hold her own. Whenever one of our pullets or young hens would get adventuresome, Diana would trot after her, scolding and squawking until the younger girl behaved appropriately. The younger females in our flocks grew to respect Diana, who also kept the cockerels in line. I’d never seen her more excited and giddy than she was last fall, when our Black Orpington cockerels moved into her coop permanently. I think she liked having birds her size with her once again. Matriarch and disciplinarian among the chickens, Diana still would gift us with her distinctive pink egg once or twice a month. She seems to have simply passed on as serenely as she lived.

News of Diana’s passing brought condolences from our farm’s Facebook followers, including one who’d just seen her the day before. It was a note from Tangled Basket Farm, however, that particularly struck me: “It makes me happy to see another chicken owner who allows their hens to die of old age.”

This heartfelt comment made me think about the many other poultry farms I know, in my area, around the country and in a few other countries. I swiftly realized that I could identifyÂ only three â€”not including my own and Tangled Basket Farmâ€”that let chickens and other poultry live out their full lives. Curious about this, I contacted a friend who keeps a small flock for eggs and meat and asked the age of her oldest bird. “Almost 3,” she replied. “After that, they don’t lay any more and it costs me more to keep them than they’re worth. They don’t live that much longer, anyway. You know that.”

I didn’t know that. In fact, I have living, irrefutable proofâ€”not just with Diana Cochin, but with Flapjack Orpington, Dolly Ameraucana and Alex Royal Palm, all age 5â€”that hens can live long lives, and older hens are contributing members of their flocks. But don’t take my birds’ word for it. Check what experts in the poultry field say about those dear old biddies.

News reports that show a lot of dead and dying birds can reinforce the belief that chickens don’t live long. While it’s true that commercially raised birds generally live only oneÂ to two years, chickens can live five to seven years or longer. The lifespan of a hen or rooster depends on the care its owner provides. Proper nutrition, shelter, biosecurity and nurturing all positively influence how long a bird lives. Keith and Donna Barton of Bessemer, Alabama, took such loving care of their Old English Game hen, Matilda, that she lived for more than 15 years and was recognized by Guinness World Records in 2004 as the World’s Oldest Living Chicken.

I’ve seen multiple sales posts this month from chicken owners looking to sell their “elderly” hens to make way for spring chicks. In every instance, the girls being sold were only 2 years old. I felt bad for those layers. They had many more years of egg-making ahead of them. While it’s true that egg production declines after the first year, hens continue to lay regularly until age 5, at which point their production drops to 50 percent of that peak rate of their first year. The Livestock Conservancy, a national organization that protects endangered livestock and poultry breeds from extinction, asserts that chicken owners should allow heritage hens to be productive for fiveÂ to seven years (and roosters for three to five years). My Dolly Ameraucana, who turns 6 this June, did not lay a single egg last year. As of yesterday, she has laid 13 this year. And older hens than her have continued to lay. Victoria, a Black Rock hen residing in Worcestershire, England, took a 13-year hiatus before she started laying again.

When their egg-production rate begins to drop, older hens don’t think, “My work here is done, Time to kick back and eat scratch for a few years,” Rather than doddering around the henhouse, these elder girls become leaders. Their practical knowledge makes them ideal for teaching young pullets tips such as the best places to scratch for insects and which nestbox is the best to use.

Diana Cochin took our Lemon Cuckoo Orpington pullets under her wing, showing them the best spot in the yard for dust baths and where to stand to receive special treats (which is under our wild-bird feeders). As patient as a loving granny, Diana would let the younger hens precede her whenever we brought kitchen scraps out to the runs. She also taught our wild boy, Thomas Orpington, a thing or two when he tried to mount one of our unwilling Orpington pullets. Thomas stayed well away from Diana after that.

Just because a hen has lived a long life does not mean she is useless. Put your “old” gals to work, and you and your flock will benefit from the years of experience. You might even get a few eggs from them, as well.