4 Ways To Fight Off Wax Moths

Wax moths may be more benign than most hive invaders, but that doesn't mean beekeepers should be complacent about fighting them off. 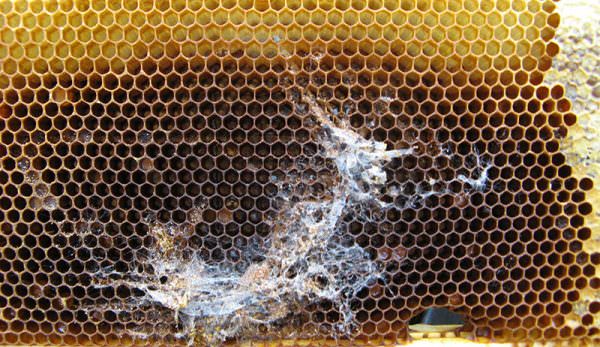 As far as honeybee predators and pests go, wax moths are more benign than most. That’s not to say we should let their subtle attacks fool us beekeepers. The key to avoiding wax moths is engaging in excellent preventative measures.

Both the greater wax moth (Galleria mellonella) and the lesser wax moth (Achroia grisella) can infect honeybee hives. Their biggest threat, as their name implies, is to the wax. In weak colonies, where house bees fail to keep moth populations in check, wax moths may quickly invade and begin to take over the wax.

It’s important to note that wax moths are typically a seasonal issue and affect beekeepers in different regions with different severity. Moths prefer moderate temperatures because hard freezes kill the eggs laid by female moths. In areas without hard freezes during the winter months, keeping on top of wax-moth populations can be a year-round battle.

There’s no single greater preventative measure than keeping colonies strong. The wax moth female flies into the hive several hours after dark, lay her eggs, and leaves before daylight. Strong colonies with low varroa mite populations, high worker populations, and good stores of honey and pollen will be able to keep the wax moth populations in check. With any honeybee disease or pest, keeping strong colonies is at the very top of your to-do list for preventative care.

Any frames you bring in from a hive—whether you’re reducing a live hive or cleaning up a dead one— should go straight into the deep freezer. This is especially important for honey frames. Freezing frames for at least two days kills the wax-moth eggs and prevents them from hatching and wreaking havoc on your precious wax.

This seems common sense, but the reality of wax moths is that they move fast. If you see any sign of wax moth larvae activity, don’t delay! Remove the infected frames immediately, freeze them or destroy them (based on your judgement of how far gone they are), and keep an eye on your hives every day or two thereafter to make sure the moths aren’t moving to other frames. To help struggling hives, you have to give them less space to guard and inhabit so they can control the moth populations better. Remember, a recurring wax-moth infestation in a hive means it is likely struggling to survive, and it will need help in other ways, too.

Fighting wax moth battles isn’t a time to get sentimental or frugal with your woodenware. In the end, infected woodenware that continues to harbor wax moths could cost you whole colonies in the end. Know when it’s time to toss out the old frames and spring for new ones.

There are no approved chemicals or treatments to kill wax moths or their eggs or larvae—and that’s the way it should be. Keeping colonies healthy and taking your own preventative measures not only keeps wax moths at bay, it keeps you in good beekeeping form with naturally healthy hives, to boot.

Keep a close eye on new colonies or recent splits, too: Many beekeepers find that wax moths take hold in newly established nucs, newly hived swarms, new splits, or other young, small colonies. Help them out by doing regular inspections and watching closely.

A final word of caution: Never put wax moth-infected supers, combs or frames inside your home or other dwelling. If the eggs hatch, you may very well never get them out of your house!