Once a predator of the western desert, the coyote is making its way into suburbia across the U.S. Here’s what you need to know. 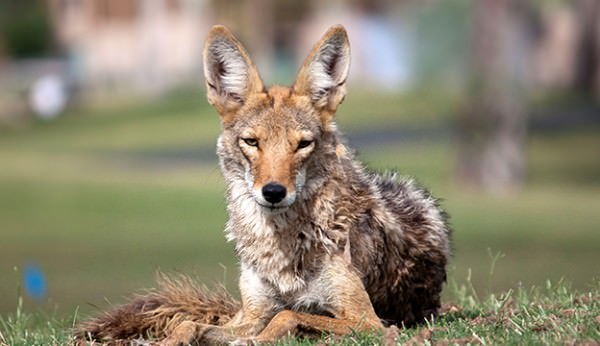 Although you might find a host of wild animals to worry about your backyard chickens or disturbing your garden, most city farmers rarely bat an eye at coyotes. The notorious canine related to wolves and foxes that can be heard howling in the back 40 of a rural farm rarely makes an appearance in urban neighborhoods or the ’burbs—at least until recently.

Before 1700, coyotes’ range was primarily the western U.S. and Mexico’s prairies and deserts. They were the at the top of the food chain, the apex predator, with jackrabbits, desert mice, birds and insects to sustain them. The next century brought in railroads, hunters, ranchers, and the development of cities, all of which contributed to a major decline in all predators, and an increase in deer and other prey populations. By the early 1900s coyote range had expanded north into Alaska and east into the great lakes region. In the latter half of the century, coyotes expanded even further, into the southeast and northeast, all the way to the Atlantic. Today, they are found in every state except Hawaii, and researchers near Chicago are studying the urban coyote population closely.

According to differing sources, the word coyote means “barking dog,” “song dog” or “trickster.” All of these names describe its best-known behaviors and secrets of success. Coyotes are canines, resembling a German shepherd but with a narrower muzzle. Mature adults weigh between 25 and 40 pounds, and their color varies from tan to buff to dark gray, often tinged with red or frosty-colored tips. A couple of distinctive characteristics that differ from most dogs are the black tip of the tail and yellow eyes.

To understand coyotes, you need to understand their relationship to their habitat. They will eat what is available. Food sources shift from a diet of small mammals and carrion in the winter to insects and fruits during the summer. While they’re generally nocturnal, they change their habits to match those of their prey. They are highly adaptable, elusive and wily, qualities that inspired many legends about the ingenious trickster.

Many city dwellers don’t know what to make of a wild animal like a coyote. If the animal makes it into the media, it’s most often because of a conflict, and many times fear or misinformation clouds objective observation that could be very helpful in understanding the animal’s behavior.

2. Will Coyotes Eat Your Pets? 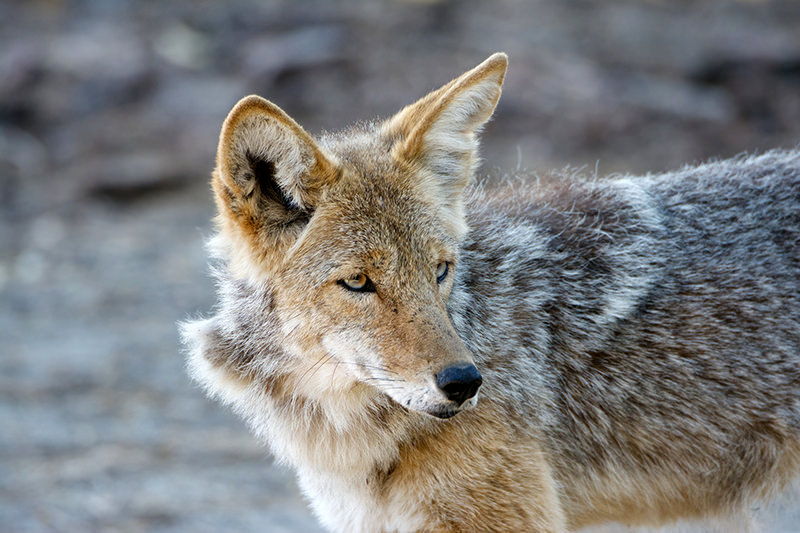 It’s possible that coyotes will go after your pets, though they’re more likely to eat your pet’s food. They are omnivores and opportunists. Urban coyotes will eat what’s easy to get to, such as your trash or compost if it’s not contained well, but that’s not the majority of their diets.

Researcher Paul Morey of the Urban Coyote Research Group in Chicago studied the scat of 1,429 coyotes in the city, and found that the majority of what they ate was small rodents. Fruit, deer and rabbits constituted the rest of their diet. Wherever people are, rodents are, too. If you feed birds, take care not to spill lots of excessive seeds, which attract mice and ground squirrels.

If coyotes are creeping into the area where you live, don’t leave pet food outdoors and keep cats indoors. A coyote is only likely to tangle with a dog if it is protecting its den, especially in the springtime when pups are young. Dens might be in a variety of protected places, such as brushy slopes, rocky ledges or even a hollow log, but they are usually far from human activity. Leash your dog if you are in an open space where coyotes are possible.

Chickens, on the other hand, are coyote fast food, so secure fencing around and above the coop. 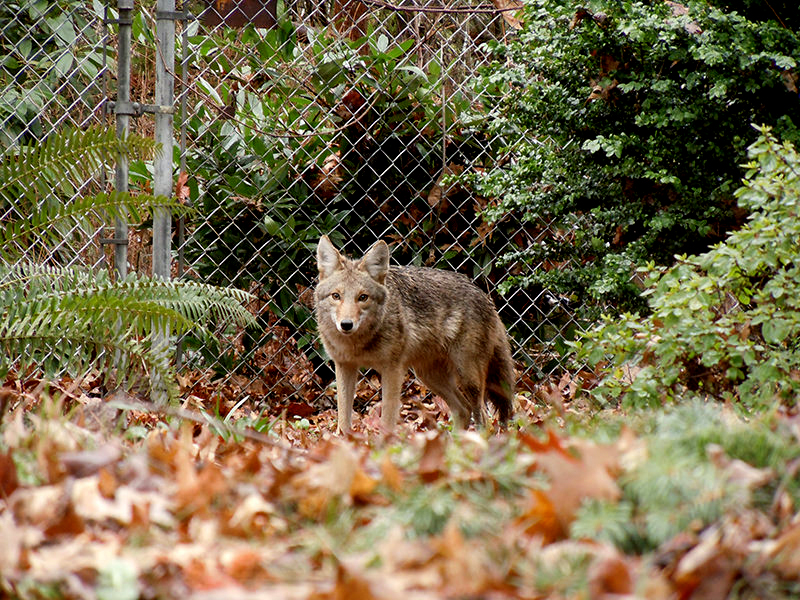 Rarely. Most coyotes will go for smaller prey if possible. Deer fawns are more likely to be prey than adults. In some cases, coyotes have been known to hunt in packs and work together to bring down elk, but this is unusual. They are also active scavengers of carrion. In rural areas, much of their winter food is provided by cattle carcasses, not because of coyote predation, but due to improper animal disposal by ranchers.

The journal Nature reported that the genetics of the coyotes in the Northeast reveal the reason they are larger and more robust than their western cousins. Back in the 1900s, when coyotes were migrating eastward, wolves were having a hard time finding mates because their populations had dropped to an all-time low due to hunting. So the ancestors of the current Washington, D.C., coyotes were actually coywolves. Biologists prefer to classify these as eastern coyotes, and they’re far from a half-coyote/half-wolf hybrid. The wolf genes from many generations ago have affected their size and facial features, and they might be more capable of attacking larger animals such as adult white-tailed deer.

Coyotes are not usually aggressive about their territories with other animals. They mark their territory with scent, and some researchers believe the coyote calls include information on boundaries. Their range varies, but population density averages one coyote per square mile.

4. Can Coyotes Breed With Your Dogs? 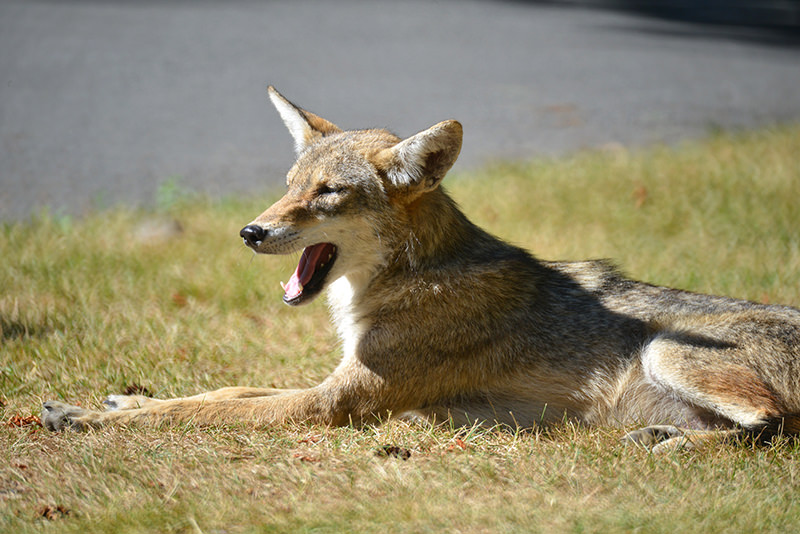 Technically, yes, but it’s not likely. Coyotes are biologically equipped to breed with most types of dogs and wolves. However, the Urban Coyote Research group explains the timing doesn’t necessarily sync up for these reasons:

Coyotes are pack animals, and the Chicago coyotes that have been researched generally have five to six adults in a pack. Coyotes can mate for life—at least, they are mostly monogamous—and an alpha pair is the dominant couple in the pack. Some coyotes are solitary, and if hunting and trapping is prevalent, the alpha pair might be the only members in a group. Juveniles reach the same size as adults at around nine months of age, and around 70 percent of them die as they move out of their home territory to establish their own. They are susceptible to canine diseases, such as distemper, mange and rabies. Unfortunately, their top predator is the automobile. 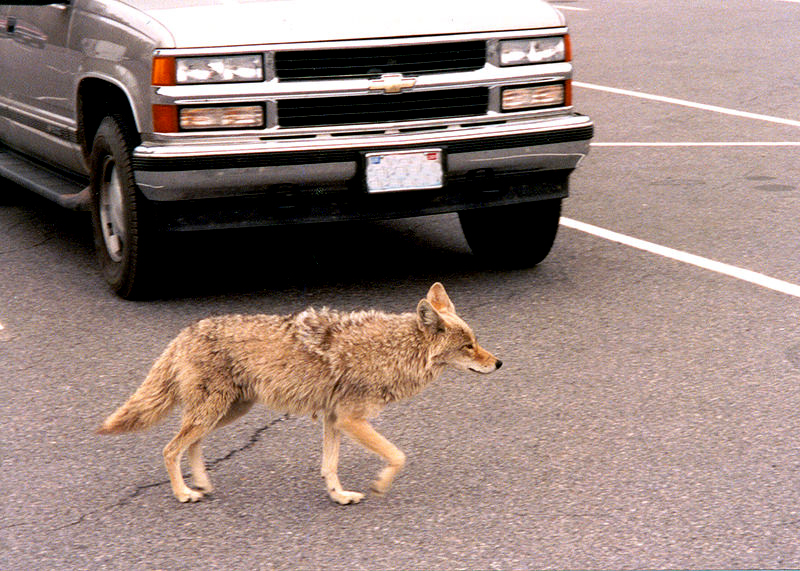 Rarely. Coyotes are shy, and despite their frequent forays into suburbia, they’re still very wild. They generally avoid people and hide in plain sight. Fragmentation of their natural habitat has forced them to use the green spaces near civilization, such as parks and golf courses. Just as with dogs getting too close for comfort, a mother coyote will protect her den and could become aggressive. Recognize this for the natural instinct in all animals, and not a random attack. There are far more cases of dogs biting people each year than coyotes hurting anyone.

6. What Should You Do if You Have a Coyote on Your Property?

If you see a coyote on your property, the animal has probably been hanging around for awhile. You better check your garbage and hope you haven’t been feeding them. Most people hear their howling and yapping at night rather than see them during the day. They are excellent at hiding in wooded patches or shrubs, and they probably know your routines better than you know theirs.

Understanding coyote behavior is your best approach, and teaching the coyotes that they are not welcome is the first step. This is known as hazing. Some hazing tactics include:

What people consider “nuisance” animals usually are the result of becoming habituated and expecting food from people. Most reports of coyotes on residential property are the result of feeding birds or squirrels, outdoor pets, or directly feeding coyotes. If you are providing habitat—food, shelter, water, space—it is more likely to accept your invitation.

Simply removing the coyote from your property will not fix the problem. Remember that coyotes have filled the niche that once belonged to bears, bobcats, cougars and wolves, so taking out one individual will leave a space another will fill. And if we take out all the predators, the prey populations will grow to unsustainable levels.

Wild animals don’t read warning signs or stay within fences, so any issues with wildlife are best handled on a community level. You might need to educate your elected officials on how to respond appropriately to wildlife concerns. The Humane Society of the United States publishes a guide for this purpose.