An Automatic Coop Door Is A Chicken-Keeper’s Dream

If you like chickens, but also weekend sleep and vacations, then an automatic chicken coop door opener may be right for you. And modern products make the choice easier than ever. 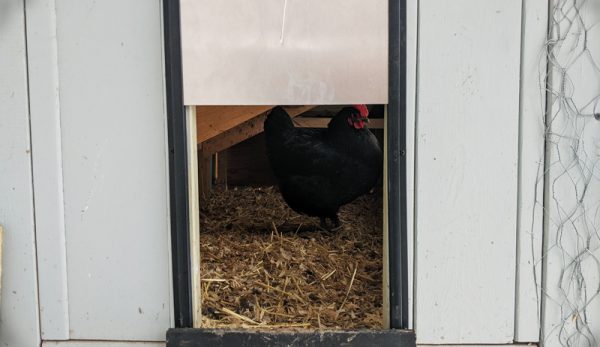 There are a lot of things I enjoy about keeping chickens. The eggs, of course, are a major benefit. I like sitting outside and watching their antics, too—I call them my “co-workers” when I perch on the patio with a laptop. And the opportunities to mend, upgrade and clean their living areas are appreciated when I’m feeling anxious or bored.

But I do not care for my chickens’ sleeping schedule. They’re hardcore diurnal creatures, up at the break of dawn every morning. I, on the other hand, am more night owl than early bird.

During the workweek, I can drag myself to the coop to release the ladies from the secured coop easily enough. By then, my alarm has already bore the brunt of my disgust. But when Saturday rolls around, my inclination to rise with the sun is somewhere bewteen nil and zero.

My hens have no concept of “weekend,” though, and that puts us at odds when dawn breaks and they decide it’s time to get outside and do their chicken things.

For the better part of a decade, my family has just done what we had to when keeping chickens. We awoke early, emerging grumbling into the early-morning sun to release whatever birds lived with us in a given moment. (As backyard chicken-keepers turned small-scale poultry farmers who reverted to a backyard flock, we’ve known a lot of beaks.)

Then, a few years ago, we moved away from the daily activities at the family farm. Weekend mornings felt like a joyful gift we’d somehow gifted ourselves. But then, of course, the pandemic hit and we, like so many people, ended up with a box of chicks in the basement, a coop out back and a creeping realization.

The chickens would, once again, take over weekend mornings.

Read more: Your chicken coop is only as good as your doors and gates—so get good ones!

What I’ve always wanted, though, is an automatic coop door opener. These gadgets were once cumbersome affairs, requiring wires and outlets and plug-in timers and who knows what else to spare the keeper the chore of turning a coop-door latch to free fussy hens.

But in recent years, these automatic coop door openers have gotten mighty slick. Many run at low power on batteries, so you no longer need extension cords and dangerous wires. They’ve got light sensors and/or timers, so the door just opens right up when the sun pops up (and the keeper stays happily supine).

And many take tight spaces into consideration, with multi-paneled doors that cut the required overhead space dramatically.

During the interminable (or seemingly) COVID-19 pandemic, when my family sat at home all day, every day for most of 2020, chicken-keeping has been pretty easy. But with talk turning to vaccines and something called “normal life,” our family dinner conversations have recently turned to dream vacations.

But, then, what would we do with the chickens?

The answer, of course, was obvious. It was time to break down and get that automatic coop door opener I’ve dreamed about since that first quartet of production red pullets came into our life.

We opted for Brinsea’s ChickSafe Advance Door Opener and Door Kit, which the company provided for the purposes of this review.

Why this I want this one, rather than the standard ChickSafe? The Advance model features a backup timer in addition to the built-in light sensor. This pairs well with my control issues.

Read more: What coop and run setup is right for your yard?

I was going to make a video of the installation but, to be frank, I don’t want you to follow my lead. I’m terrible about not following directions and usually end of having to redo stuff. And that prompts me to curse a lot, which I also don’t want to subject you to.

The good news, though, is that installation is easy and directions clear. Essentially, you just install two uPVC rails along each side of your coop-door opening, spaced the width of the included weatherproof aluminum panels.

Three screws in each secure the rails in place.

The actual automatic coop door opener is a small device—about the size of a paperback Stephen King novel—that hangs via two keyhole slots in the back of the unit.

Just attach two screws to the coop itself (you might want to make a rough template for this, which I did but not exact enough, prompting a redo and a few curse words), then pop the unit on. Slide it down like you would a picture frame, and you’re good to go.

Tie One (Door) On

Next, you slide the doors into the rails and put them in their permanent “open” position (I used a clamp to hold them in place) and tie the string dangling from the unit to the lower panel. (As the bottom panel is pulled up by the string, it lifts the top panel by two protruding bolts, which I think is pretty clever.)

Then, honestly, your hardware is installed. You can test everything out manually—the door will (very slowly) lower itself, stopping when it hits the bottom of the door frame.

After that (and not before—the instructions stress this a few times), pop in four AA batteries to get the automatic coop door opener ready to use.

You’ll need the directions to program the unit, though it’s not hard—just specific. You can set the primary open function to light level sensing, with a backup programmable timer. Or you can just set the automatic coop door to close via the timer.

(Note: The unit runs on a 24-hour clock time, so mind your evening hours when setting the time, which is the first thing you do.)

Did I make mistakes while doing this? Yes, a few. I absolutely set the time to a 12-hour clock at first. And, despite the unit being very clear that it was in manual mode, I still stood puzzled when the door didn’t close of its own accord at dusk.

But a quick return to the directions set me straight, and I was quickly able to rectify things.

The next morning, I squealed (yes, it was a squeal—you can ask my wife) in glee when I looked out the bedroom window to see our hens running around in their enclosed coop. They were confused, wondering where the ape was with their food, but they seemed happy to run free in the morning light.

We’ve now spent exactly one week with this automatic coop door opener, and after a single weekend of sleeping in, I’m not sure how I ever got along without one. Seriously.

I’ve made a few notes in this week of usage, though, that I’m happy to share.

I may have gotten away with, say, not ensuring my rails are perfectly level. (My coop’s settled, and I make do.) But, as that is one of the directions, I can only consider myself lucky that the door actually functions.

Make sure there’s a something for the door to bump against when it reaches the bottom.

This “bump” causes a bit of slack in the string that tells the unit to stop letting out string. I cut a simple rabbet cleat in a piece of scrap wood and attached it to the coop, which both stops it and gives the door something to slide behind.

This cleat is currently causing me a bit of grief, though.

It catches some bedding when the birds kick things around, which could theoretically impede the door from closing all the way. (The unit senses blockages so the door won’t close on a slow-moving chicken.) Also, I worry a piece of dirt will make its way into the track on one of the rails, stopping the door a little higher than I like it.

Nothing about this is cause for alarm, as I just knock the dirt away when I gather eggs. (And morning function is way more important to me than evening.) Plus, that cleat, at about an inch tall, offers forgiving space against potential gaps.

But when we eventually do leave the house, I’d like to have this figured out so I can know my hens are secure at night without a routine double-check.

I’m not in the habit of leaving my chicken feed out overnight, as I don’t like vermin (and vermin love chicken feed).

But, because it’s in an enclosed run and hung at beak-level to the birds, I don’t mind leaving it out occasionally. So, for weekends or days off, I just fill up the feeder the night before so they can enjoy breakfast while I’m snoozing.

This Family Found Love For Chickens During Pandemic