More than just living lawn ornaments, Texas Longhorn cattle bring a variety of virtues and products to the pasture (and they look amazing, too). 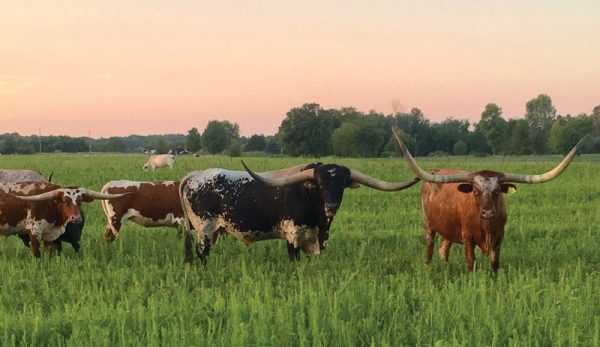 Look at a pasture of Texas Longhorn cattle and you’ll immediately be struck by the beautiful colors and impressive horn sets. These majestic pasture ornaments are also great producers. And they offer much in a wide array of markets.

Today’s Texas Longhorn cattle retain much of what natured instilled. The breed is a hardy protector against predators in the pasture. However, producers also breed for a gentle nature when being handled—a desirable trait.

Most breeders spend enough time with the cattle to have them eating out of their hands and enjoying a scratch. Some do raise just a few Texas Longhorns to pretty up their pastures and keep them grazed. But more cattlemen are discovering a multitude of ways the longhorn can benefit anyone interested in owning livestock.

Read more: Here’s what you need to know about putting cattle on pasture.

Beef from Longhorn cattle is documented for its natural leanness. As many breeders feed primarily grass, the end product is beef that is also a great source of nutrients. Even Texas Longhorns finished on grain tend to be lower in saturated fat than most commercial cattle breeds.

Producers sell the majority of their beef direct to consumers. The health-conscious, as well as those looking for locally raised beef, know to seek out this breed.

Texas Longhorn beef production provides byproducts that can generate income as well. The horns and hide, as well as skull mounts, are popular and easy to sell.

Read more: Cattle get hot, too. Here’s how you can keep the heat off your cows.

Cows are renowned for their large pelvic openings and lower birth weights, vastly decreasing the number of times calves have to be pulled. Mothering ability, milk production and protectiveness put these females in the spotlight as producers.

Bulls are big contributors to productivity and lower birth weights, too. This makes them successful for breeding for registered seed stock and for calving ease on first-calf heifers. A bull also brings in those positive female traits he passes along for a dose of hybrid vigor with any breed.

Registered Texas Longhorns participate in shows, horn-measuring contests and futurities. The cattle may also be used for ropers and, as proficient browsers, to help clear land overgrown with brush that other cattle may not eat.

These animals can produce continually for many years. And they do so while eating efficiently and providing a beautiful pastoral scene. If that sounds good, then Texas Longhorn cattle might just be for you.  —Myra Basham, Texas Longhorn Breeders Association of America

This article originally appeared in the May/June 2021 issue of Hobby Farms magazine.