Chickens Aren’t Vegetarians, So Go Ahead & Give Them Meat

With a voracious appetite for barnyard bugs, chickens are not naturally vegetarians, and it's OK (even beneficial) to give your flock meat now and again. 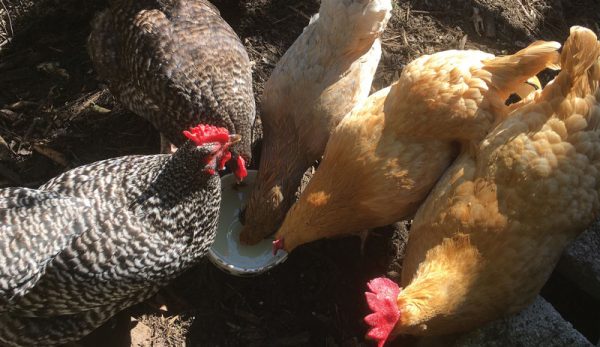 When my wife (aka our livestock manager) Chris and I first became acquainted, she told me that she had previously been a vegetarian for a number of years. I asked her why she had come back to the dark side of eating meat (but not our chickens).

She said there were two reasons. First, socializing had been difficult. Some dinner party hosts thought she would be happy with a minimalist salad. Second, potlucks were unlucky affairs.

This was decades ago, a time when general knowledge about vegetarianism was limited. During those old, backward days, I told my sister over the phone, that my girlfriend-at-the-time was a vegetarian. She paused, and I’m sure she was trying to imagine what she would serve us for dinner when we visited. Then she asked, “Can she eat rice?”

Knowledge and acceptance of vegetarianism has grown at a similar pace to the adoption of backyard chicken-keeping since then. And somewhere along the way, it seems that some chicken-keepers have conflated the two things a little bit and believe that chickens also have a culture of vegetarianism.

I mean, the ingredients on the bags of some organic chicken feed don’t list any animal products, right?

Granted, everyone knows that chickens eat bugs in addition to seeds, fruits and greens. But I believe that most people don’t think of bugs as meat. And therefore, the notion of our sweet little hens as being essentially peace-loving vegetarians has become commonplace in some circles.

But chickens are really just pocket-sized dinosaurs, descended as they are from mouthy beasts such as Tyrannosaurus rex. Have you ever seen a chicken chase, catch and eat a little toad or a mouse? If so, you might think that the chicken’s Latin name should be Tyrannosaurus pecks.

If your yard sees few toads or mice, your hens can also get their chase-thrills met with a bag of live crickets bought from the pet-supply store or a bait shop for a backyard cricket rodeo.

A colleague of mine described what he thought of as a four-layered food pyramid for chickens.

But I think that’s incomplete. It makes more sense to think of our hens’ food pyramid as having five levels. At the top is: meat.

And to meet their desire for meat, my wife and I let our chickens pick clean bones of lamb, pork and beef. We don’t give them poultry bones. That would be weird.

They also get in a tizzy for shrimp shells, lobster shells and fish skins. We haven’t noticed those aromatic scraps messing up the eggs’ flavors at all.

Another reason my wife gave up vegetarianism? She missed bacon. And, it appears, so do our chickens. Whenever I cook up a mess of bacon (I’m a Southerner, and I need my daily dose of pork products), I pour the hot, liquid bacon fat into two small bowls. This goes into the fridge to solidify.

We keep one bowl to cook with, and we give the other to our chickens. We’ve even trained some of our neighbors to bring bacon fat to the chickens in exchange for a few eggs.

I’m sure some readers cringed at the mention of bacon fat. My Yankee wife didn’t want it in the house. But she came around when I pointed out how many of the chefs she admires cook with it.

Bacon fat that doesn’t get repurposed for cooking in American kitchens or fed to animals either goes down the drain or ends up in the landfill. Did you know that fat from food companies and restaurants often gets added to animal feed?

Fat poured down kitchen drains creates what are called “fatbergs,” congealed fat blobs that cause wastewater to back up in the sewer pipes. That’s just as yucky as it sounds. I recommend that you don’t look online for photos of fatbergs. You can’t unsee those images.

Fat and other organic matter in the landfill isn’t much better. It turns into methane gas that escapes into the atmosphere. Methane is even worse than carbon dioxide from your car at causing the climate disruption that melts ice caps and inflames other environmental disasters such as hurricanes, wildfires and tornadoes.

So not only is re-purposing bacon fat a tasty option, but it’s an ecological imperative that we turn excess bacon fat (and other cooking fats) into delicious fresh eggs … if you ask me.

I’m not worried that our birds will get too much salt from these drippings. They pace themselves. That little bowl of fat lasts two or three days. As omnivores, chickens like to switch things up. After a few sticky mouthfuls of bacon fat, they scratch for some bugs or scavenge other vegetable scraps from our kitchen or beak-tap the vermin-proof, 5-gallon bucket “vending machine” for some organic layer pellets.

Historically, chickens were never vegetarians. Even as Southeast Asian jungle birds millennia ago, they were opportunistic omnivores, like us. And their food decisions only had to meet four opportunistic criteria.

Read more: These are the 5 essential nutrients your chickens need.

And chickens’ diverse dietary tastes aren’t unique. Surprisingly, the division between herbivores and omnivores in the natural world isn’t as clear-cut as we once thought. It’s more of a spectrum than a yes-or-no option.

Evolution has always favored animals that are opportunists over the picky eaters. Two of the most endangered animals on earth are koalas and panda bears. The first only eats a few species of eucalyptus leaves. And the second is mostly jonesing for a few species of bamboo shoots and leaves.

Critters with the widest interest in types of foods are more likely to survive the erratic seasons and changing conditions that existed even before we humans skewed the climate.

So, for backyard chickens to eat meat isn’t some urban anomaly. It’s how they roll.

I’m not saying that if your household is vegetarian, you have to feed meat to your chickens. I’m just saying your chickens would welcome the sort of nonjudgmental inclusiveness that permits your neighbors to earn a few eggs and help save the planet by recycling their meat scraps in your hen pen.

This article originally appeared in the May/June 2021 issue of Chickens magazine.

Understanding The ‘Trees from Seed’ Philosophy