Taking Comfort In The Many Expressions Of Sourdough

As a cold chill and powdery snow take over the farm, I turn inward and relish in the cozy joys of baking. My first projects involve sourdough starter. 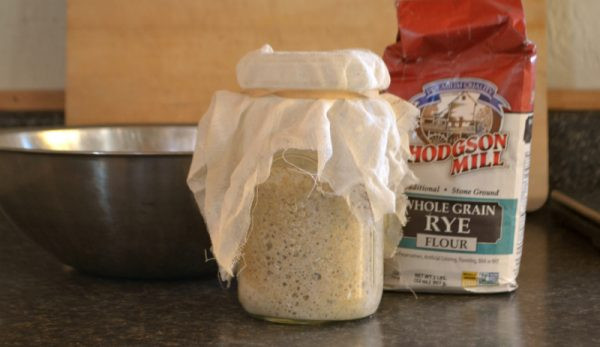 The weather here at the farm has been quite nurturing to me as I try to put into practice my word of the year: presence. We received our first true snowfall since we moved here a year and a half ago, so it hasnāt been difficult to cozy in and spend time just being a mom and embracing our new life as a family. One thing itās also allowed me to do for the first time is make breadāsomething Iād argue requires a great deal of presence in order to accomplish it well.

When our daughter was born, a dear friend gifted me with a sourdough starter that was gifted to her when her son was born. Itās a strong starter, which helps someone like me, whoās apt to forget its weekly feeding despite however present Iām trying to be. Iāve always wanted to bake bread but Iāve never been ableāor perhaps the better word is willingāto give it the time and attention it requires. So with the change of pace our baby afforded me and the chill in the air, I took this gift to heart and began baking.

Many of us are drawn to the homesteading life because it gives us a sense of purpose and accomplishment as we focus our energy and resources to provide for our families. Baking bread perfectly illustrates that. Iāve learned that you can do a lot with sourdough, so itās not only been nourishing to our family, itās been nourishing to my creative spirit, as well.

Sourdough Recipe No. 1: The Crusty Loaf

For my first recipe, I decided to stick with the basics: a crusty loaf. This recipe was your typical long, drawn-out bread-making affair, but it was simple enough for a beginner like me. It required a rest and a rise of the dough, with 2Ā½ hours of āfoldingā sandwiched in between. The folding technique was nice because I could set a timer to give it four folds every half hour, and then spend the time in between with my baby. The end result was a beautiful, artisan-style loafāa real confidence booster for someone who has failed time and time again with yeast breads.

Bread is but one thing you can make with sourdough. My sourdough benefactor also gifted me with a delicious and versatile pancake recipeāa perfect way to use any leftover starter after feeding it. While weāve enjoyed these pancakes the traditional wayāwith maple syrup and some fruit on the sideāyou can add any combination of fruit, veggies, nuts and seeds to the batter. Iāve made savory pancakes with beets and Parmesan; nutrient-boosting breakfast pancakes with blueberries, flax meal, brewerās yeast and pecans; and colorful pancakes made with broccoli or carrots. The recipe doesnāt even include sugar, so itās a true artistās palette.

Hereās the recipe if youād like to make your own creation:

Mix starter, flour and milk, and let ferment for 30 minutes to 2 hours. (You can also prepare the night before and stick in the fridge until morning.) Mix in the remaining ingredients. Add your favorite mix-ins. Portion out batter onto a heated griddle or cast-iron skillet using a 1/4 cup measuring cup. Serve immediately or freeze for easy snacks later on.

Rugbrod is a Danish-style rye bread. I like to think of it as sourdough meets quick bread because rye flour doesnāt need kneading because of its low gluten content. This recipe has quickly become a favorite in our house, not only because of its simple mix-proof-bake process, but because itās so tasty. I donāt have a rugbrod pan, so I use a regular loaf pan and adjust the bake time as needed.

While Iām happy to say Iāve had some good sourdough successes so far, this experience hasnāt been without its failures. There was that pull-apart roll recipe I tried where the rolls didnāt quite rise enough, meaning they were tasty but a bit too dense. Thereās also that time I proofed my starter in a too-small jar and it bubbled up all over my countertop.

But those failures havenāt gotten me down, and Iām eager to do more with my starter. Iām still on the hunt for a good sandwich bread recipe. I tried one that required some yeast, but it was a bit too dense and crusty for my preferences and I donāt want to cheat by using yeast. I found one that looks promising that Iāll probably give a go this weekend. Iāve also been hanging on to a cracker recipe that Iāll try when I can give it a full day’s attention. (When making crackers, I might as well make a whole bunch, lest they get eaten in one sitting.)

In the meantime, when Iām not enjoying the pleasures of bread-baking, weāve been getting outside to enjoy the pristine beauty of a snow-covered farm and the quietude it brings us. It wonāt be long until spring descends and our attention is turned from winter rest and indoor comforts to the busy-ness of the growing season.