Now there's a community garden in every major city, where people come together to grow fresh food—and it doesn't look like the trend will end anytime soon. 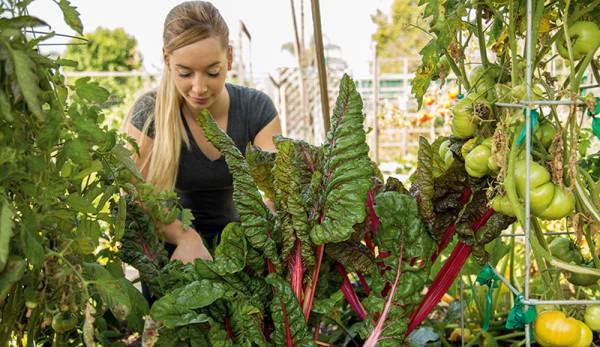 Recently, I had the pleasure of visiting the Picardo Farm P-Patch community garden in Seattle with my husband and daughter. It was all the more enjoyable because it happened entirely by accident. We were on vacation to see family, and we decided to walk through the neighborhood to burn off energy and see the sights.

We entered this unique urban space through the Wedgewood Demonstration Garden, which sits on a narrow strip of land between two residences and leads through to the larger garden. The demonstration garden is beautiful in its own right, but at the time it belied the scope of the larger community garden behind it.

We had our first look at the Picardo Farm P-Patch with fresh eyes, not knowing where we were or what to expect. The space is open, with small sheds and buildings around its edges and garden plots filling the space between. My daughter immediately began to run and play, my husband seemed relaxed and deeply interested in the garden, and I felt a sense of calm wash over me.
I’ve been gardening a lot since I got married, and I love being able to put fresh produce on our table. My husband and I belong to a local CSA—a community supported agriculture program at a local farm—in Southern California, but I’d never experienced an urban community garden like this. We passed a few courteous gardeners who warmly spoke with us about the garden, and I could feel the strong community presence in the place, even though the garden was mostly empty.

It was this lingering sense of community that I could intuit but not directly see that intrigued me most. This was a place where people obviously came together, and I wanted to know more about this garden and others like it.

As a footnote to our Seattle adventure, we got to visit another amazing garden in the city, the Mercer Garage Upgarden community garden, which we first spotted from the top of the Space Needle. With downtown Seattle as its backdrop, the Upgarden emphasized the strong sense of community these open spaces can bring to an urban setting.

I had to know more, so I reached out to the Seattle Department of Neighborhoods, which I learned administers the P-Patch program.

“The Picardo P-Patch garden is the first community garden in Seattle in the modern era,” Rich Macdonald, supervisor of the P-Patch Community Garden Program, informed me. “It started in 1973 and has a really interesting background. It was part of a remnant truck farm—maybe 10 blocks long and 10 blocks wide, a large swath of land—like most truck farms that ring the cities of America.”

Now sitting on about 2.5 acres, it was repurposed by graduate students at the University of Washington in the early 1970s who wanted to farm it as a community garden, bring kids in and generate collective activity, Macdonald added. Eventually, the city purchased the land from the Picardo family, which is where the “P” in P-patch comes from.

“As a community garden, the numbers of people involved have risen and fallen through the years,” Macdonald said. “At this point, there are about 300 families that are gardening there.”

The Picardo Farm has monthly work parties—a common feature of community gardens, I came to learn—and is almost completely supported by volunteer efforts. One long-time volunteer, John Olson, told me about his involvement with the garden, and noted that the P-Patch program also had a children’s garden that he helped orchestrate. His wife Sue volunteers to orient new gardeners to the Picardo Farm P-Patch.

Almost all activities in each P-Patch are handled by volunteers. Each P-Patch has a program to provide produce to food banks or hot meal programs, and everything from organization to special events—such as the end-of-season cider making session and a fundraising dinner—are handled by local gardeners.

The Seattle Department of Neighborhoods is responsible for the logistical and administrative stuff associated with the overall program, and they keep the whole system running. They make sure spots are allotted fairly, they assess and reassign abandoned lots, and see to expansion plans and land management issues. Otherwise, it’s up to the local gardeners to build their volunteer base and keep the show running in the garden.

Community Gardens On The Rise

Seattle has 90 community gardens, Macdonald said, with more than two-thirds situated on land owned by the city. The city’s history in promoting community gardens comes from a deep-seated desire to foster connections between people, he added.

However, Seattle is far from the only city where community gardening is a growing concern. The American Community Garden Association is a non-profit organization that seeks to foster growth in urban gardening and greening, and it’s succeeding in its mission, with thousands of community gardens spread across the nation.

“It gives a more global perspective than a lot of community gardening individual city stuff,” said Sandy Pernitz, a board member of the ACGA. “You’re a part of a network … I think Seattle is a good influence, but it isn’t the only one. You could look to New York, Boston, Chicago, Philadelphia, around Atlanta and places where there’s been quite a bit of interest in community gardening.”

Interest is widespread, and the ACGA offers information to gardeners from literally every state.

“In Sacramento, where I’m at, and in California in general, we get a lot of calls,” said Bill Maynard, former president of the ACGA and community garden coordinator for the City of Sacramento. “(We hear from people in) neighborhoods across the country too that want to start community gardens.”

Nearly all established gardens I investigated had two- to five-year waiting lists. Despite the ebb and flow of interest in community gardening, the trend is for more gardens to be developed and more people to get involved. One such garden started in 1995 has seen rapid growth in interest. More modest in scale than the Picardo Farm P-Patch, but not in beauty, the Del Mar Community Garden in Costa Mesa, Calif., has 60 parcels, and each one reflects the personality of the person or family tending it.

“We are in a transitional phase where we are working to rebuild the volunteer committee,” Renteria said. “We are hoping to create a more active volunteer group so that we can further build the sense of community at each garden.”

Although cities and community-based organizations can help orchestrate local gardens, it’s up to those with a vested interested in their garden’s success to step up and get involved. The same is true if you want to start a community garden in your own area.

“You need to find a place, and then find someone who believes in what you want to accomplish,” Renteria said.

After you’ve found a location, you’ll have to verify your ability to use it, organize others who are interested, and begin the process of establishing the garden. There’s a lot to consider before you can start planting, but a great place to start is with the ACGA. The organization offers a wealth of information to new gardeners and those interested in starting gardens in their area.

This article originally appeared in Best of Urban Farm.

Erin Gallagher is a freelance writer and home gardener with a strong interest in locally sourced food and self-sufficiency.