Eggs and meat are common reasons for poultry keeping, but many house ornamental chicken breeds to conserve threatened or endangered species. 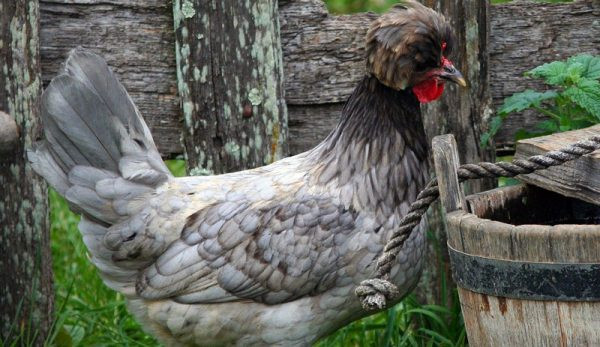 Whether tending a backyard microflock or working a small-scale hobby farm, as poultry owners we typically have a objective guiding our selection of breeds. Regardless of the goalâ€”eggs, meat and conservation breeding are commonâ€”a variety of birds exists to suit our needs.

A question I’ve received with increasing frequency over the past couple of years, however, indicates growing popularity in raising poultry for another purpose: beauty. And while peacocks, pheasants and swans definitely add feathered elegance to our flocks, eye-catching domestic poultry have sparked people’s interest of late.

Looking to add an appealing aesthetic to your flock? Consider keeping one of these four breeds of endangered ornamental chicken breeds.

The doyen of decorative birds, the Polish chicken (pictured above) tops the list of ornamental chicken breeds.

With its distinctive umbrella (or pompom, for females) crest of feathers, the Polish looks like a Hollywood starlet sporting an elaborate headdress.

Bearded Polish, with full muff and beard, pack an additional punch in the eye-catching department.

Looking for laced feathers? Silver- and buff-laced Polish are recognized by the American Poultry Association (APA).

Want something even more spectacular? Look for a breeder specializing in frizzled Polish. The additional waves and curls of frizzled feathers take the Polish’s appearance to beyond outstanding.

One important note: the breed’s distinctive crest often obscures the Polish’s eyesight. This causes them to startle easily and to not be aware of approaching predators.

Queen Victoria’s favorite breed of chicken, the heavily feathered Cochin resembles a walking puffball. The feathering continues right down to its toes, covering almost every inch of the Cochin.

One of the breed’s most noticeableâ€”and prizedâ€”features is its bun: the curved, well-rounded puff of feathers that comprise its tail.

Despite its corpulent appearanceâ€”or perhaps because of it â€” Cochins tend to stroll in a slow, stately manner, almost as if they know they’re drawing everyone’s attention.

More than 15 color varieties are recognized by the APA, including silver penciled, lemon blue, buff Columbian and mottled. Like the Polish, the Cochin can also be frizzled.

Microflock owners will be happy to hear that these friendly, docile birds are available in bantam size, perfect for backyards.

If the Polish is a Hollywood starlet, the Sumatra is an Imperial Majesty, trailing a gorgeous long cloak of tail feathers behind them. Its upright carriage and aristocratic strut add to the breed’s elegance.

While available in blue and white varieties, it’s the Black Sumatra that is the true stunner, with plumage so magnificently iridescent that the bird gleams a brilliant green in the sunlight.

Its tiny pea comb and almost imperceptible wattles and earlobes make the breed quite cold tolerant, but to keep its beautiful tail from becoming bedraggled due to snow and slush the Sumatra will require a covered run. Even in warmer climates, a roofed-over run is highly recommended as this breed is a talented high flyer.

The Sumatra rooster will devotedly protect his hensâ€”even those of other breedsâ€”but prepare for fireworks if you keep more than one Sumatra male.

With beautiful black spangles on snowy white or golden feathers and a distinctive V-shaped comb, the Appenzeller is definitely a show-stopping bird. The female’s Phyllis Dilleresque head feathers and the male’s mohawk look literally add a crowning touch to this spectacular breed.

Despite its exquisite elegance, the Appenzeller is not for every poultry fancier as it retains several traits from its jungle-fowl predecessor: it flies well, roosts high in trees, and is a fantastic and thorough forager. In short, this is a bird that needs plenty of space.

Note: The APA does not recognize the Appenzeller.

Conservation Priority status: the Spitzhauben variety of the Appenzellerâ€”the only variety found in the United Statesâ€”is Threatened.

The Conservation Priority List was established and is maintained by the Livestock Conservancy. Parameters for the ornamental chicken breeds and other species on the list are as follows: