Founder Elizabeth Sugarman tells us how goat yoga classes have helped her California-based hobby farm provide sanctuary for the community. 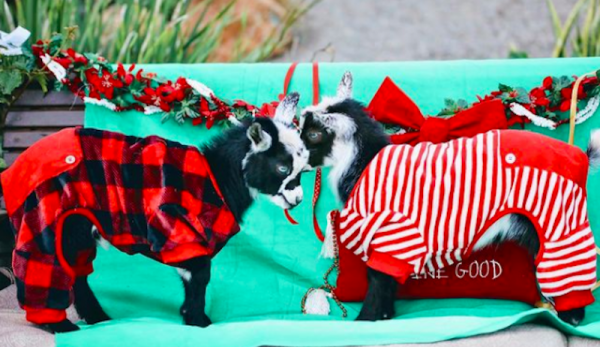 Elizabeth Sugarman has been a hobby farmer for 16 years. These days, she runs Sugar Sweet Farm in Encinitas, California. There, goat yoga classes perk up her daily farming duties.

“The goats are pure joy. I am constantly in conversation with them as I work around the farm,” says Sugarman. “They always want to be right in my business! They are spontaneous, kind, curious and affectionate and can instantly put a smile on your face.

Taking time out from tending to her goats, we spoke to Sugarman about the roots of her hobby farming adventure and the benefits of goat yoga. We also got the scoop on dressing up goats in fancy outfits.

Sugarman pinpoints her decision to embrace the hobby farming lifestyle back to the day she left her law practice to become a full-time mother.

“I wanted to create a magical childhood environment where my children and I would work and learn together doing real, purposeful work with our hands,” she reflects. “Our little farm became our living classroom. And our daily lessons provided instruction in compassion, empathy, problem solving, self discipline and independence along with an infinite amount of practical skills, far beyond what most children enjoy.”

Sugarman’s children are now in college. But they still return home to help out on the farm from time to time.

Read more: Goat yoga is just one of many great reasons to keep goats!

Goats are an integral part of Sugar Sweet Farm. And it turns out Sugarman’s daughter, Sissy, was a factor in the decision to focus on ruminants.

“Sissy wanted to raise dairy goats,” recalls Sugarman. “I gave her two Oberhasli goats for her tenth birthday. She bred, raised and showed them until she left for college this past year.

“Oberhaslis are an endangered breed of dairy goat from Switzerland,” Sugarman adds. “Sissy’s first goat, Heidi, is still the matriarch of our herd. All of her daughters and granddaughters join us for goat yoga class while Heidi stays behind in the barnyard.

“Even though we’ve had sold out classes for three years here at Sugar Sweet Farm, we still can’t convince Heidi that goat yoga is a thing.”

The Magic of Goat Yoga

Speaking of goat yoga, Sugarman characterizes the sessions at Sugar Sweet Farm as being an “animal lover’s nirvana.” She adds that the whole herd of gentle goats, plus three llamas, all like to take part and “mill about the classroom and everyone smiles and laughs.”

Sugarman says that there’s also a healing element to the goat yoga classes that comes from “connecting with a baby goat or a goat that comes and cuddles up on your yoga mat, choosing your energy to share.”

She adds, “Guests leave here often remarking this was the best day of their lives. And I feel so privileged to be a part of that.”

Read more: Want more stories delivered to your inbox? Sign up for our newsletters today!

One of the biggest personalities at Sugar Sweet Farm is a goat named Baby Zeus that Sugarman describes as being “pure love.” She says he’s “an exceptionally gifted jumper with advanced balancing and agility skills” but is also happy to turn into “a cuddly marshmallow in an instant.”

Sugarman adds that Zeus “loves giving sweet kisses” and that “you can get absolutely lost in his gorgeous eyes when he comes in for a close-up—goat kisses are the best!”

Dress You up in Goat Love

If you dig into the Sugar Sweet Farm’s Instagram account, you’ll notice a number of pictures starring goats dressed up in dapper outfits. Sugarman says that her team is always conscious about “keeping all of our animal interactions positive for the animals” and makes sure that none of the clothing ever inhibits a goat’s movement.

“We deftly slip on bandanas as the goats nibble treats so it just feels like it’s part of a cuddle session,” she explains. “There are a few wethers with big personalities who really enjoy sporting a complicated costume and showing off, while most of the does find costumes beyond a scarf annoying.

“Our team is so sensitive to each goats’ personality that they just follow their lead on how much fashion fuss they’ll tolerate.”

Roses, Tomatoes & Cucamelons Are All In The Mix At Brooklyn Rooftop Botanicals

Getting Started: Selecting Your Chicken Breeds