Grow Artichokes As An Annual Or Perennial

Get an edge on your farmers market competition by growing artichokes on your terms and selling them at a premium price. 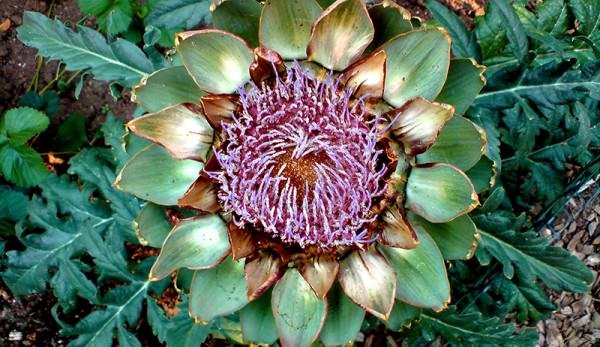 A mature artichoke plant (Cynara scolymus) is truly a thing of beauty. Reaching up to 5 feet tall and ­equally as wide, this stunning, half-hardy perennial vegetable produces masses of 3-foot-long, silvery, deeply serrated leaves and towering flower stalks topped with the edible flower buds we call artichokes. A happy, healthy artichoke plant can produce dozens of chokes during its lifetime, especially if it’s grown in the right conditions.

Nearly 100 percent of the United States’ commercial artichoke crop grows in California, where the climate is ideal for optimum growth. Although artichokes require a long growing season with warm days and cool nights, it shouldn’t stop you from growing this prized vegetable in other parts of the country.

No matter where you grow your artichoke crop, its cultural needs are the same. Artichokes prefer to grow in full sun to partial shade, and because these massive plants are heavy feeders, be sure to work several inches of compost into the garden before planting.

Artichokes don’t like water-logged soil, particularly in the winter. Choose a planting site that’s well-drained, and mulch the plants with several inches of organic matter to keep their roots cool during hot summer weather and cut down on weeds.

It’s important to regularly irrigate artichokes throughout the growing season, especially when the flower stalk and buds are forming. Periods of drought may cause the buds to open into a purple, thistle-like flower too quickly, rendering the choke inedible.

Artichokes typically don’t form their edible flower buds until their second year, though some varieties can be grown as annuals. Because of this, special care is often necessary during the winter months, especially for cold-climate artichoke growers. This means the right growing technique depends on where the chokes are being grown.

Artichokes are an easy perennial crop in USDA hardiness zones 8 and above, though the plants don’t perform well in the extreme South, where summer temperatures soar. To grow this native of the Mediterranean in warmer climates, treat it as a true perennial. Varieties such as Green Globe, Imperial Star, Symphony and Green Globe Improved, or purple-budded selections, such as Opera, Tempo and Concerto, are perfect for warm-climate artichoke growers.

Plants can be started from seed, root cuttings or divisions early in the spring. They’ll continue to produce chokes for five to 10 years, beginning in their second year, until production declines and the plant needs to be replaced.

Harvests typically start in spring of the plant’s second year. After the spring crop has been harvested, cut the flowering stalks down to the base of the plant to encourage a subsequent crop in the late summer or fall. To overwinter artichoke plants in USDA zones 8 and above, simply cut the plants back to the ground after the fall harvest and cover them with 3 inches of straw or shredded leaves. Remove the mulch in spring, just before new growth begins.

To grow this vegetable in USDA zones 5, 6 and 7, consider the following extra details. First, decide if you’d like to grow your artichokes as an annual crop or a perennial one.

To grow artichokes as annuals, start with a hardier variety, bred for a colder climate with a shorter growing season. Northern Star, Emerald and Imperial Star are three of the best choices for annual artichokes in the North. For annual production, start seeds indoors under grow lights, in late winter—about 10 to 12 weeks before your last expected frost date. Use grow lights to keep the plants stocky and deep green, and bottom heat to boost the soil temperature until germination. Move the seedlings into slightly larger containers as they grow.

Artichoke seedlings should be transplanted into the garden about three to four weeks before the last expected frost. Exposing them to temperatures between 35 and 50 degrees F for about 10 to 14 days when they are young induces flowering in first-year plants. If you wait until the weather warms to plant artichoke seedlings out into the garden, they will probably not produce chokes their first season.

Artichokes grown as annuals in the North produce flower stalks in the late summer or fall. Once the chokes have been harvested, plants can be pulled from the garden and composted. Or, growers can try to overwinter the plants.

To grow artichokes as perennials, know that most varieties survive only down to about 20 degrees F, so if you want to grow them as a perennial, you’ll need to give them protection during the winter months.

Start by picking the hardiest varieties possible: Northern Star, Violetto and Grande Buerre are good choices. For perennial production, plants can be started from seeds or purchased as starter plants. You can also start them from divisions and root cuttings taken from other growers or purchased from a commercial source.

Allow the plants to grow all season long, though they likely won’t produce a flower stalk their first year. To overwinter the plants, cut the plants down to about 12 inches high after the first light frost strikes. Surround them with a wire cage about 3 to 4 feet tall. Fill the wire cage with a foot of compost, then add straw or fall leaves until the bin is full. Cover the entire bin with a tarp, pinning down the edges to keep it in place. When spring arrives, remove the mulch about three weeks before the last expected frost.

For artichokes grown as perennials in the North, flowering stalks will be produced in the early spring, beginning the second year. After harvesting this spring crop, cut the flowering stalks to the ground to stimulate a second harvest in the fall.

Another option for overwintering artichokes is to cut back the plants to ground level and dig them out of the garden upon autumn’s arrival. Gently shake the soil off their roots and store the bare-root plants in a box of peat moss in a cold, but not freezing, garage, basement or refrigerator. When spring arrives, plant the overwintered bare-root artichokes back out into the garden.

In addition to growing artichokes in the garden or field, they can be grown in containers. Northern growers find this technique particularly helpful because rather than having to heavily mulch in-ground artichoke plants, container-grown plants can be overwintered in an unheated garage or root cellar. Artichokes grown in this manner should be cut back to their base in the late fall and the entire container moved to a location between 35 and 50 degrees F until spring’s arrival. Water potted artichokes only every four to six weeks during the winter months.

Regardless of where and how you grow artichoke plants, the harvesting procedure is the same. Buds should be cut from the plant before the individual scales start to open. Use a sharp knife to remove the bud and 2 to 3 inches of stem from the plant. The main bud is the largest; the side buds are slightly smaller but just as delicious.

Because artichokes have an excellent shelf life, they’re a great crop for farmers markets and CSA boxes. Chokes can be stored in the fridge for up to three weeks, making them one of the least perishable fresh vegetables you can grow.

For a spectacular market-stand display, cut the entire flowering stalk off and display intact flower stalks in a bucket of water. Customers can take the entire stalk with them, or you can cut the chokes off as you sell them.

Artichokes bring a premium price at farmers markets, and despite the extra care they require in colder climates, they’re one beautiful vegetable that’s well worth growing.