The Hidden Life Of Voles

Don't disregard voles as vermin. Take a look beneath the surface. 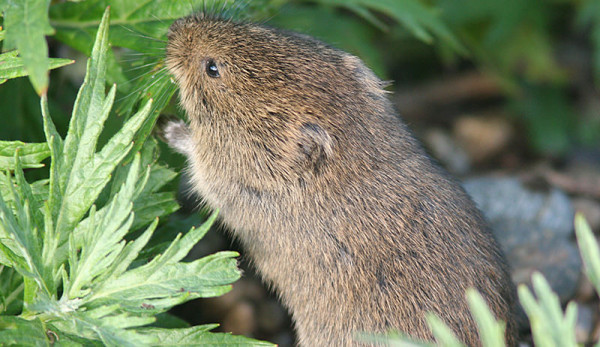 Gardeners and farmers keep their eye on the plants. We delve into understanding the life cycles, nutrient needs, sunlight preferences and all the intricacies of coddling a seedling into a full-grown, fruiting crop. In all this preoccupation with the green life above ground that brings us a buffet of fresh food, it’s easy toÂ forget that life under foot is also very attracted and interested in the plants we are hosting.Â Voles are one of those little-understood animals that go unnoticed until they create a perceived problem in our growing scheme.

Voles are worth understanding on their own terms, but they are most commonly compared with mice. More like a hamster than a mouse, a vole isÂ generally shorter, stouter, andÂ hasÂ a rounder head, smaller eyes and shorter tail than a mouse. AsÂ rodents, they eat a wide variety of plant parts, and some also consume small animals, such as gypsy moths, snails and animal carcasses. The succulent parts of plants, such as the roots, base and seed heads are favorites of voles.

A sign of vole action in your garden is grasses cut into short lengths, which voles do to reach the tastiest, juiciest leaves and flowers in the summer. In the winter, voles rely on seeds, nuts, tubers and bulbs. When times are tough, voles might girdle young trees as they strip off tender bark to eat.

More Than Meets The Eye

More than 20 vole species live among us in North America. The most common typesÂ are easy to locate by their descriptive names: prairie, meadow, pine, montane, California and Oregon voles top the list. You wouldnâ€™t be able to tell the difference between all these voles by looking at them, but unusual differences lie beneath the surface, deep down in their DNA.

Scientists are intrigued by the voleâ€™s genetic variability and resiliency, earning this tiny rodent the title of the worldâ€™s fastest evolving mammal. Purdue University researchers found several anomalies in how genetic material is passed down from one generation to the next and concluded that voles are evolving new species 60 to100 times faster than any other mammal. The teeth of voles turns up in archeological digs so frequently that theyâ€™ve been used as an informal way of dating artifacts; the â€śvole clockâ€ť is based on whatÂ type of vole was present during the time period and what their teeth looked like, which is directly linked to the vegetation and climate of that age.

Unlike moles, voles travel on the surface, as well as underground. Their surface runways might be a couple of inches wide through clipped and trampled grass. Nearby, you may find clean entrances to their burrows. Mole holes usually have conical mounds of dirt at the entrance, and gophers fan their dirt out in a crescent or heart shape. However, the opportunistic voles use their neighbors burrows, too.

Voles have a close relationship with the plants and land where they are found, mostly associated with dense perennial grasses. Woody forests show less abundance of voles, and vice versa; voles eat young saplings and prevent forests from developing. This, in turn, clears out or prevents dense stands and reduces the risk of forest fires spreading. It may be a stretch to give voles credit for playing the role that herds of grazing bison once played, but they are filling an ecological niche. With their underground activity, they are good dispersers of nutrients, seeds and mycorrhizal fungi.

Some voles appear to be very caring creatures. Researchers at Emory University have isolated a gene that influences monogamy among prairie vole males, compared to the polygamous meadow vole. Another study at Emory showed that stressed prairie voles receive empathetic responses from their mates, and that the unstressed vole shares the same stress hormone response as the stressed vole.

Unlike the solitary mole, voles produce multiple litters of young each year, and males with the monogamous trait also tend to their young longer and more attentively. Those young mature within a month and reproduce exponentially. However, they live fast and die young. The web of life in an ecosystem depends on lots of small things to feed the bigger things, and such is the case with the vole population. The predators of voles include hawks, owls, coyotes, foxes, snakes, and raccoons.

If you view your garden or farm as the ecosystem that it is, perhaps you can find room in your heart and in your fields for voles. If not, think like a voleâ€”compassionately remove the attraction of dense vegetation, protect young trees with mesh and don’t leave out excess birdseed that attracts rodents.