The Business of Mushrooms: Having Fun(gi) at Work

The market for mushrooms is expanding, and consumers are becoming more educated. Here's how you can enter the business of growing fungi. 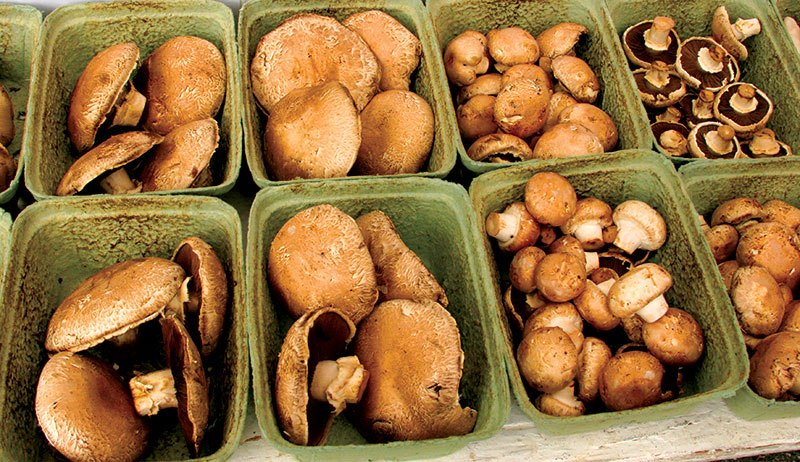 Mushrooms are the hot new thing, it seems—which is funny because mushrooms have been around forever. You almost can’t shop at a farmers market without finding a mushroom vendor, enter a food co-op without seeing flyers for foraging workshops or eat at an independent restaurant that doesn’t tout locally sourced fungi on the menu. In fact, the mushroom market is growing 5 percent to 6 percent each year, according to Tradd Cotter, owner of Mushroom Mountain near Easley, South Carolina, speaking at the Organic Growers School Spring Conference earlier this year in Asheville, North Carolina.

There’s a mushroom revolution going on, with many consumers no longer content to eat only the white button mushrooms purchased in neat plastic packaging at large-chain grocery stores.

“I’ve been involved with the mushroom business for 15 years, and it’s amazing to me to see how much more educated the general public is now,” says Mike Kem-penich, owner of the Minnesota-based mushroom-focused business called Gentleman Forager.

If you’ve considered mushroom farming, a number of business outlets exist for you, but—spoiler alert—none is simple.

The first market that often comes to mind for home-produced items is the farmers market. While farmers markets are becoming crowded for vegetable producers, there seems to be room for mushroom growers.

“I take great pleasure in being able to provide the public with a variety of mushrooms they might not otherwise have the opportunity to purchase,” says Amy Fox, owner of Fox Farm & Forage in Apex, North Carolina. “I really take delight in educating my customers and absolutely love it when I am able to convert the reluctant or self-proclaimed mushroom hater to a mushroom lover. Weekly repeat customers are confirmation of my goal: to provide a quality product that people enjoy.”

“Selling mushrooms is not like selling produce that people are familiar with,” Fox says. “Profits from selling mushrooms directly correlate to being able to engage a potential customer and then having the knowledge to complete the sale. One must be relatively knowledgeable about cooking and be able to make recommendations on which product to use in an indicated culinary application.”

Restaurant sales make up the bulk of Fox’s business, as well as grower Steve Sierigk of Trumansburg, New York. “Shiitake growing and selling can be efficiently done if established accounts are eager for the crop,” Sierigk says. And his accounts at Hawk Meadow Farm are; he sells about 1,000 pounds per year, mostly to restaurants.

“When I compare the amount of profit made versus the time and expense of wholesale versus farmers markets, wholesale is the obvious winner, hands down,” Fox says. “Also, there is much more room for growth within the wholesale market, whereas farmers markets have a pretty consistent profit ceiling.”

Fox points out that this might not be the case in your area, though. Fox will also continue to sale at farmers markets because wholesale accounts don’t let you connect with your customers in the same way that farmers markets do.

Be aware that in many states, it’s illegal to sell wild-harvested mushrooms to restaurants or wholesale accounts, so check your local state laws.

A community-supported-agriculture model—or perhaps a community-supported-fungi model—is less common in the mushroom world than in traditional agriculture, but it’s out there. In Minneapolis, Kempenich partners with independent grocer Pahl’s Market to offer a mushroom add-on to the market’s vegetable CSA. This is the mushroom CSA’s first year, and 200 people—10 percent of the Pahl’s Market CSA—purchased a share, which exceeded expectations.

“With more education, over time, we’ll continue to see that number grow,” says Kempenich, who has been foraging for more than 40 years.

He looks at this CSA as a wholesale account for his business because he knows he has a standing order of 200 mushroom units each week. Kempenich cautions that doing this as a stand-alone CSA would be more challenging: “It would be cost-prohibitive up front until you built a substantial number.”

Plus, part of the appeal of this CSA model is getting to partner with another independent, locally owned business.

Mushrooms can be cultivated in growth medium in buildings, as they are more and more, but mushrooms can also be cultivated outdoors. Both are interesting to the consumer, and Sierigk capitalizes on this by offering farm tours.

“The tours are a very different angle on things and require some degree of marketing energy and outlay of cash for advertising and all,” Sierigk says. “Farm tours can become time demanding … however, we really like connections with people that have generally not been exposed to the type of agriculture that we practice.”

Sierigk looks for any opportunity to spend time in the woods—such as leading these tours—and he points out that participants generally make a purchase on the tour, which adds a lot of value.

About four years into his business, Kempenich started leading classes as a break from tending to mushrooms 70 to 80 hours each week. He now runs foraging classes as well as overnight tours through the woods of Minnesota with well-known chefs to forage and then cook mushrooms.

“I like tying everything together,” Kempenich says. “The mushrooms go to a great restaurant, so why not bring the chefs to the woods?” By adding this social aspect to forging, he creates more collective mushroom knowledge and also connects more people to the outdoors.

Independently, however, farms that sell tinctures and supplements from their mushrooms have to be much more careful. Scrutiny from the U.S. Food and Drug Administration has mushroom growers quietly offering these products. Those who make and sell holistic, health-promoting mushroom products must refrain from making any medical claims and can’t make the products on a large scale.

In any agricultural pursuit, waste occurs. How you handle that “waste” is up to you. At the OGS Spring Conference, Cotter, who has grown mushrooms commercially since 1994, suggested value-added additions to any mushroom enterprise. Dehydrate the mushrooms that you don’t sell at the market today so you can sell them later, and offer compost and vermicompost from your scraps. Partner with others to see your mushrooms in prepared foods, beer and other products.

There are nearly as many ways to profit from mushrooms as there are varieties of mushrooms themselves. None of these enterprise options is a simple, hands-off business, but each has a reward for the mushroom lover.

When producing mushrooms indoors, an economy of scale is at work, as you need to build a whole space for cultivation. See “The Mushroom Gold Rush” on page 62 for more about start-up costs. In these operations, mushroom producers such as Fox Farm & Forage’s Amy Fox say the key is to go big. The directive here is quantity plus quality.

“Start modestly, as there are so many variables that need to be right for this to work well,” he says. “I always recommend quality over quantity in all aspects of natural-log mushroom production. It can be as small as about 100 production logs to give a modest weekly supply. In fact, I always recommend starting small to get the knack for handling the logs and all of the demands of the crop.”

Part of cultivating this quality is to have some idea of what you’re doing before you get started, in business as well as mushroom production. There are too many variables in the market and in production that can’t be learned just by reading a book. Fox has never hired a consultant, but she had known to do so: “It would have saved me thousands,” she says.