Calm and broody, the Narragansett has grown in popularity due to its prolific nature. 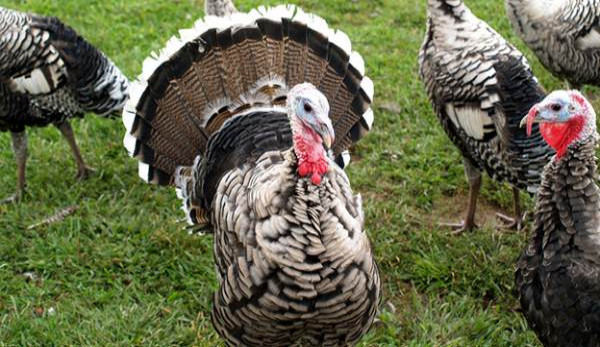 Use: Narragansett turkeys are a meat variety known for being very prolific, broodiness and possessing a calm disposition.

History: The Narragansett was developed in the Rhode Island bay of the same name in the 1700â€™s from crosses of native wild turkeys and domestic farm turkeys (most likely Blacks) brought from Europe by settlers. They were most popular in the Northeast though their popularity declined greatly by the 1950â€™s. This variety has seen recent growth on small farms due to its popularity as a productive heritage turkey. It was admitted into the first American Standard of Perfection in 1874.

Conformation: Narragansettâ€™s have the same productive body type as other varieties, but possess a unique coloration similar to the Bronze. Instead the coppery tinge is replaced by a steely gray in the Narragansett. Standard weights are: Old Tom: 33 lbs., Young Tom: 23 lbs., Old Hen: 18 lbs., Young Hen: 14 lbs.

Special Considerations/Notes: Recent attention to the Narragansett by poultry preservation groups has been very helpful toward increasing the number of breeding birds in the United States.