How do large animal hooves work? What could go wrong with a livestock hoof? Learn this and more in the first of our three-part series about livestock feet. 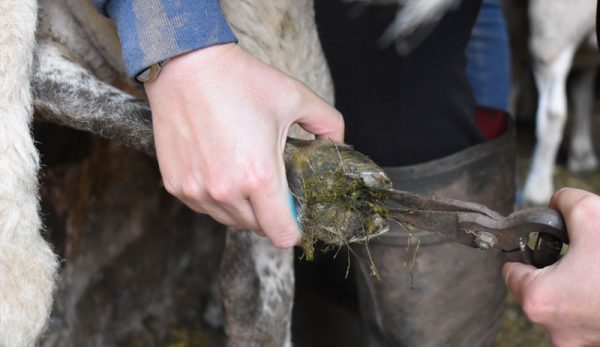 Many people know the saying “No hoof, no horse.” That axiom, it turns out, does in fact hold water. An average horse weighs one-thousand pounds and spends the majority of its time standing and moving. So foot integrity is vital to a horse’s well being.

The same could also be said for our other hooved livestock species, like cattle, sheep and goats. Let’s take some time to explore the hidden world of livestock feet. We’ll start with normal anatomy and function, and later delve into what can go wrong in a three-part series.

Although the hoof is rigid, it can respond to outside forces. It will expand and contract with environmental moisture and acts as a shock absorber during movement.

Hooves grow from the top, from sensitive tissue called the coronet band. It is also connected to tissue on the inside.

The hoof itself is a hollow structure. Inside is a bone that is suspended by an intricate mesh of Velcro-like tissue called laminae. This laminae not only connects the bone of the hoof to the inside of the hoof wall, but also provides the bone nourishment via numerous tiny capillaries.

In horses, the hoof bone is called the coffin bone or pedal (pronounced “pee-dal”) bone. Anatomically, it is the distal or third phalanx, often shortened as P3. It is the equivalent of the tip of our middle finger.

How Does A Livestock Hoof Grow?

Of course ruminants have two hooves on each leg. And perhaps because of their slightly curved shape, the hooves individually are referred to as “claws”, such as the “lateral claw” or “medial claw” when talking about the outside or inside hoof, respectively, on a leg.

These are equivalent to the tips of our third and fourth fingers.

A healthy adult horse grows new hoof at the rate of between 1/4 to 1/2 inch per month. This means a horse will regrow its entire hoof wall over the course of about a year. Bovine hooves grow a bit slower, at a rate of approximately 2 inches a year. But, then again, a cow’s hoof isn’t as tall as a horse’s hoof.

Read more: When it comes to keeping sheep, you need a first-aid kit. But avoid using it with basic preventatives.

Hoof wear and tear does occur as the livestock animal moves around in the field. But some species and classes within species tend to require regular hoof trimming.

Farriers are individuals skilled in trimming and shoeing horse feet. Specialized trimmers, on the other hand, frequently are asked to trim the hooves of dairy cows. Many beef cattle do not require as much hoof maintenance as they are typically kept on large pastures as compared to many dairy breeds that are kept in barns.

Regular foot trims are also recommended for sheep and goats. With these species, as well as with llamas and alpacas, you can typically do this yourself with proper hoof trimmers.

Like with cutting your own fingernails, there is danger of cutting the hoof too close to sensitive tissue and causing pain. A good rule of thumb is to nip away the overgrown hoof that has folded over the sole. Then, clean the foot and nip until you see bright white sole.

Stop once you reach this point.

Stay tuned for next month, as we look deeper into what can go wrong with a hoof and how to prevent common hoof issues.