It’s time to head out and cut back last year's asparagus ferns. Asparagus pruning is one of my least favorite springtime chores, but it’s also one of the most essential. 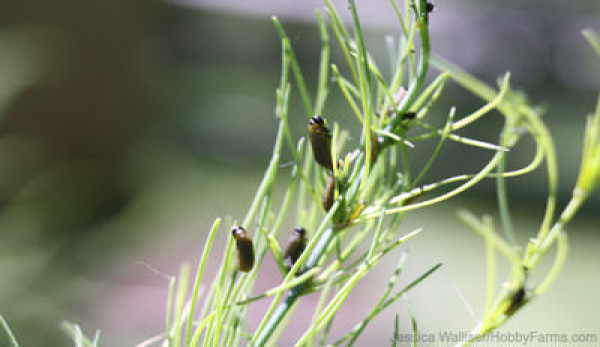 It’s time to head out and cut back last year’s asparagus ferns. Asparagus pruning is one of my least favorite springtime chores, but it’s also one of the most essential. Asparagus ferns can have some sharp points on them, but if the patch isn’t cut back and cleaned out every spring, I’m practically setting out a welcome mat for asparagus beetles.

Asparagus beetles are found across the U.S., and the adults spend the winter in garden debris—hence the benefits of my annual clean up. They emerge in the spring to begin feeding and mating. Here we have only one generation of asparagus beetles, but gardens in warmer climates can host two or even three generations!

Asparagus-beetle adults and larvae feed on the developing asparagus spears by chewing ragged rips into them. I also sometimes see their dark, oval eggs attached on-end to the tips of the spears. The eggs are soon followed by small, army-green, slug-like larvae. I spend a few minutes every summer morning knocking off the asparagus-beetle larvae from fully-developed asparagus ferns with a gentle sweep of a broom. Once they hit the ground, spiders, big-eyed bugs, ground beetles and other ground-dwelling beneficial insects gobble them up before they have time to find and climb back up onto another asparagus plant.

If their damage were to ever get really bad, I could spray the developing spears with an organic insecticide based on the active ingredient spinosad, but, thankfully, I haven’t had to deal with that yet because I cover the entire patch of emerging asparagus spears with a layer of floating row cover as soon as they begin to poke out of the soil. The cloth is then removed when harvest stops so that the ferns can fully develop. Between the fabric, my annual debris cleanup and my regular summer sweepings, the asparagus beetles are kept largely at bay.