Poultry Profile: Get to Know the New Hampshire

This dual-purpose breed created from the Rhode Island Red is known for its tasty meat and for producing extra large brown eggs. 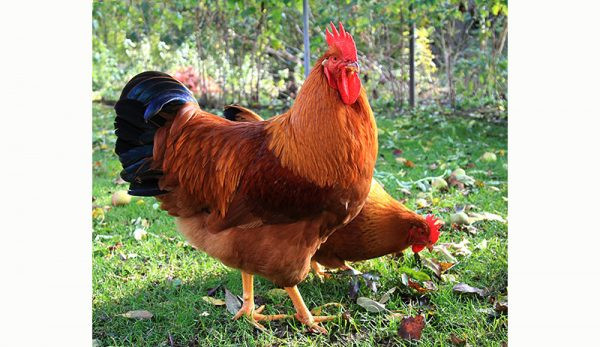 This all-American breed was created in the early 20th century by farmers and researchers from the New Hampshire Agricultural Experiment Station.

This dual-purpose breed, selected more for meat production than egg production, dresses a nice, plump carcass as either a broiler or a roaster. It was created out of a specialized selection of Rhode Island Reds. The breed can be quite competitive and aggressive, but it can be raised in confinement or free-ranged. The breed was admitted to the American Poultry Associationâ€™s Standard of Perfection in 1935.

The New Hampshire breed also comes in a bantam size.

This fast-growing breed is so meaty & tasty that the Slow Food USA organization selected it as part of its U.S. Ark of Taste program. Hens also produce extra-large, brown eggs.

The New Hampshire sports a bright-red, five-point single comb that stands upright in males and droops at the back in females. It also has long, bright-red earlobes and a medium to moderately large bright-red wattle.

Mature males weigh as much as 8.5 pounds. Hens weigh 6.5 pounds.