Rotating Chickens Gets Them On Pasture Without Hassle

Free-ranging chickens can make a mess of the yard and more work for their keeper, but a rotational pasture plan delivers the best of both worlds. 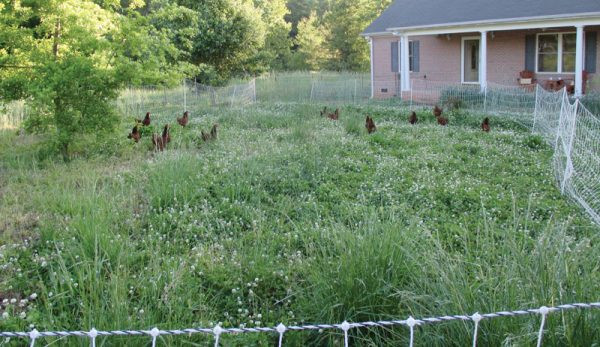 I had to learn the hard way that allowing our chickens to free-range in the yardāas some experts adviseāleads to my having to free-range the yard as well: removing poop from the patio, replacing mulch and replanting uprooted flowers.

So perhaps the term āfree-rangeā overpromises just a bit. Itās not really free if you have to give up your free time to fix things. Maybe a term such as āhome-rangeā would be more accurateāmeaning that we give the chickens special places where they can feel like theyāre home-on-the-range and we feel like weāre home free.

For my tiny homestead on a 1/4-acre in downtown Durham, North Carolina, my wife and I enclosed a small area under a cluster of shrubs to create a home-range we call the Corral or the Forest Grove for our half-dozen hens.

But that wouldnāt be adequate for chicken-keepers with more land and more chickens. Fortunately, my colleaguesāShawn Jadrnicek and his wife, Stephanieāhave confronted the same issues and come up with the kind of low-cost, low-maintenance, high-success system I can appreciate.

You can find details on their system and other great innovations for the small farmer or homesteader in their bookāÆThe Bio-Integrated Farm: A revolutionary permaculture-based system using greenhouses, ponds, compost piles, aquaponics, chickens and more.

Jadrnicek has a few acres in the country and decided he didnāt want to spend time mowing a lawn. But he did want chickens. And chickens want to eat. So why not kill two birds with one stone? Or to put it in less violent terms: Why not feed two or more birds with one great idea?

Instead of lawn, Jadrnicek plants poultry pastures that work on the same principle as rotational grazing for cattle. This provides about 30 percent of his chickensā food supply. And it spares him the painful roarāand expenseāof micromanaging a lawn mower.

He figures he only spends eight hours per year (per year!) mowing small areas the chickens didnāt trim thoroughly. As he wrote in his book, āā¦ instead of spending time and money mowing a polluting lawn, our foraging chickens convert our lawn into food and money.ā

And just like a pastureāor a lawnāhe maintains it with proper liming for pH. The chickens meet most fertility needs. Additional species of plants can be sown either to enhance the chickensā diet or to attract pollinators while the chickens are devouring other pastures.

In warm, wet, sunny South Carolina, Jadrnicek figures that each hen needs about 43 square feet of poultry pasture to sustain it for six to 12 days. Thatās about the size of the footprint of one queen-size bed per chicken.

Another way to think about that is that the footprint of a mid-size pickup would be enough for two chickens.

So if, like Shawn, you need a setup for 40 chickens, picture each pasture as big enough for a pajama party with 40 beds or a salvage yard jammed with 20 pickups. If youāre not intimidated by math, each pasture for 40 birds for six to 12 days would need to cover about 1,700 square feetāabout the size of a small three-bedroom house.

The limits of six to 12 days depend on rainfall and season.
A poultry pasture might only have enough to eat for six days during winter or during a summer drought, or 12 days during the optimal weather of the spring and fall.

Depending on conditions, each pasture will need two or three months to recoverāless when conditions are optimal. So identifying at least seven or eight discrete pasture areas would allow enough recovery time to get through a year without damaging your land.

Jadrnicekās seven pastures for his 40 chickens covers in total a little over 1/4 acre and helps their 40 hens deliver about 150 eggs a week for home and market.

When first released to a pasture, they spend time scavenging for high-protein bugs (if itās not winter) and any fallen fruit. Then they clip off any nutritious seed heads. Then they trim down leaves of clover, grasses and other plants.

What happens if you leave hens on pasture longer than the six to 12 days? If you havenāt moved them by then, their scratching will uproot small plants and leave bare earth exposed to drying from the sun and erosion from the rain, one of the cardinal sins of gardening.

In the worst-case scenario, you can still take advantage of the bare soil to plant annuals such as millet, buckwheat or rye. But youāll save time and money if you take chickens off that pasture while the perennial plants still have enough leaves to recover in a couple months.

From overhead, Jadrnicekās seven poultry pastures look like petals on a flower. At the center of the flower is the coop and pen. Shawn calls the pen an alley because from there chickens can be allowed access to each pasture.

Because the chickens rotate from pasture A to pasture B and then from B to Cāuntil they get to pasture G and restart the cycleāJadrnicek only needs enough fencing to enclose one pasture at a time:

The fencing that makes this system work is called portable electric poultry netting. Installed and maintained correctly it has enough juice to keep the chickens inside and to keep coyotes, neighborhood dogs and other predators outside.

It only carries enough juice to scare the chickens, not to hurt them. But one little buzz provides a lifetime memory for both chickens and predators. Donāt use it with chicks. They are small enough to slip through the openings in the netting.

Depending on the brand and length, a roll with needed accessories will set you back something in the low to middle three-figures and should survive about 10 years of outdoor use. But it seems well worth the cost given that you could be cutting your chicken feed bill by up to a third as well as saving money on mowing costs.

And pollinators would certainly benefit from the flowering pasture plants.

But it isnāt the calendar that tells you when to move the chickens. You want to do it before the pasture the chickens are on looks like a battlefield in an interspecies war zone.

When that time comes and the chickens are in their coopāand youāve turned the power off!āyou only need to pick up one end of the fencing (on the east side of the pasture say) and walk it in a big loop around the fencing on the west side that stays in place.

Place the end that youāre carrying further west to enclose fresh pasture that should be 4 to 8 inches tall. So only a little more than half of the fence gets moved each time. That should take about 10 minutes or less.

To keep hawks at bay, Jadrnicek keeps the width of each pasture to 15 feet. When a small, nimble Cooperās hawk took interest, he added a goose to the flock and that ended that.

That sounds easy enough as far as that goes. But how do the chickens get from the alley to each pasture? Because the chickens spend almost all their time inside the predator-proof electric fencing, Jadrnicek doesnāt need a heavy-duty fence for the alley. He uses the alley just as a distribution tool.

So he built it with chicken wire hanging on posts and pinned to the ground.

To channel the chickens into a given pasture, he lifts the chicken wire enough to insert a bottomless 5-gallon bucket on its side, on the ground and under the fence to act as a chicken-sized tunnel: a chunnel! He pins the chicken wire fencing down around both sides of the bucket to keep the chickens from straying.

In anticipation of fresh bugs to chase, all the chickens pour through the chunnel like water in a fire hose, spraying themselves all over the pasture. When sleepy time calls, they stroll back again in the evening through the chunnel into the alley and then into their coop.

Before moving the electric fence to enclose fresh pasture, Jadrnicek removes the bucket. Then he puts it in a new spot after the fencing has been put in place for the next pasture.

Misconceptions abound when it comes to installing portable electric poultry netting. Frequently, this means that the netting doesnāt hold enough of a charge to persuade predators to salivate elsewhere.

Besides following the directions, Jadrnicek offers a few other installation tips:

With this system in place, Jadrnicek went from spending more than 100 hours a year messing with the mower to only eight hours. He cut the cost of his chicken feed bill by about 30 percent. And his chickens get a lot of healthy outdoor time, exercise and a diversified diet while heās busy with other tasks or enjoying some family time.

So he swapped out free-range for free time by putting his chickens on a home-range. With a little electric power, you can corral that kind of poultry power, too.

This article originally appeared in the September/October 2020 issue of Chickens magazine.