Mom and Dad were really worried when Sam the lamb’s mama died. 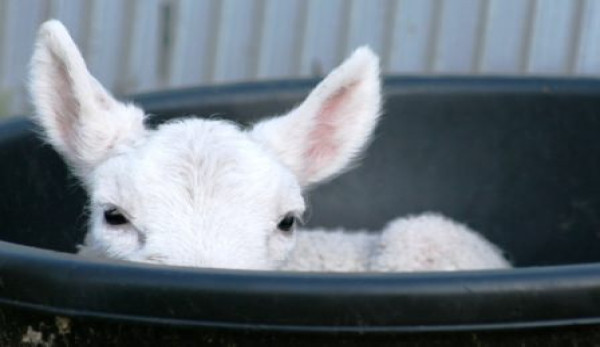 Mom and Dad were really worried when Sam the lamb’s mama died. Sam was only five weeks old.

He was already nibbling grass and sampling the ewes’ yummy pellets and bagged alfalfa, but now he was all on his own. Where would he get his milk?

After Sam had time to say good-bye to his mom, Mom carried him and Dad carried Cordelia up to the little stall Mom uses as a jug for newly-lambed sheep.

Cordelia is small but already weaned, so they thought she’d make a good friend for Sam. Mom brought out her big box fan from her office and tied it in a corner so the lambs could stay cool. Cordelia liked that, but Sam was too upset to notice.

Sam cried and cried and his crying broke Mom’s heart. Then Cordelia got upset and joined in because she missed her friends, Miss Maple and Othello. It was pretty noisy around here those first few nights.

The next morning Mom tried to give Sam a bottle of milk. It didn’t work. He was afraid and struggled and struggled because he wanted his mom. Then a nice lady at Mom’s Yahoo Groups Hobby Farms Sheep list said to wait 24 hours until Sam was really hungry for milk, but to give the lambs hay and pellets in the meantime.

So that’s what they did. Sometimes it’s hard to teach a newborn lamb or kid to take a bottle but it’s much, much harder when they’ve had “the real thing.”

To help him get the idea, Dad cradled Sam in his lap, and held the bottle in one hand with the nipple steadied in Sam’s mouth; he covered Sam’s eyes with the other hand. That simulates the darkness under a mama sheep’s groin. Pretty soon Sam tried a few slurps. Mom called our dad the Lamb Whisperer. It worked!

The first few days Sam tried to scurry away when Mom or Dad came out to feed him, but as soon as he was caught and he’d fussed a bit, he was OK. Now he likes milk in a bottle. He meets Mom or Dad at the gate and grabs the nipple as soon as he can. Tonight he and Cordelia get to go back to the paddock with the other lambs and ewes. Hooray!