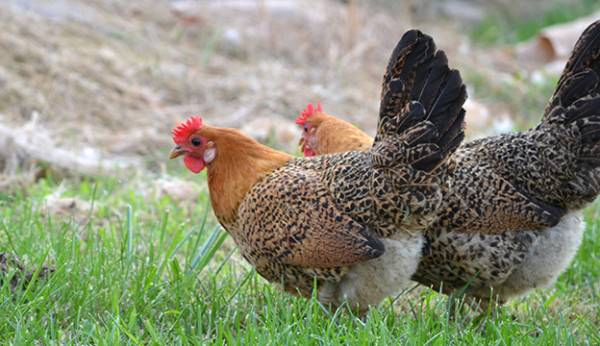 Use: The Sicilian Buttercup is a heritage layer chicken breed that produces medium-sized white eggs.

History: Although its exact origins are unknown, the Sicilian Buttercup chicken breed was reared by Sicilian farmers for centuries before importation to America in 1835. The first well-documented shipment of Sicilian Buttercups came to America in 1860 and was received by C. Carroll Loring of Deham, Mass., who bred and promoted the breed for 50 years. A breed club formed in 1912, which quickly grew to 300 members. The Sicilian Buttercup chicken breed was admitted to the American Poultry Association’s Standard of Perfection in 1918. Today’s stock all descends from eggs imported in 1892.

Conformation: The Sicilian Buttercup chicken breed is named for the golden-buff color of the hen’s plumage and for the breed’s unique comb, which is actually two single combs that merge in front over the beak and again at the back, forming a deep cup ringed with a fine-textured, red comb, beautifully crowned with points. Sicilian Buttercup colors are also unique. Roosters are a rich, reddish orange with a few spangles on the body and black tails. Hens are golden buff accented with black, elongated spangles set in parallel rows all over their bodies. Black portions of both sexes have metallic-green overtones, and both sexes have willow-green legs. The breed is slender and elegant like other chicken breeds of Mediterranean origin. Sicilian Buttercup cocks weigh 6½ pounds and hens weigh 5 pounds.

Special Considerations/Notes: Sicilian Buttercups are fast-maturing chickens. They are peerless, free-range laying chickens, and they don’t adapt well to confinement; they’re flighty and good fliers. The breed is listed as Threatened on the American Livestock Breed Conservancy’s Conservation Priority List.