Rep. Thomas Massie and his rural Kentucky family left the grid more than a decade ago to run their farm and run for political office. 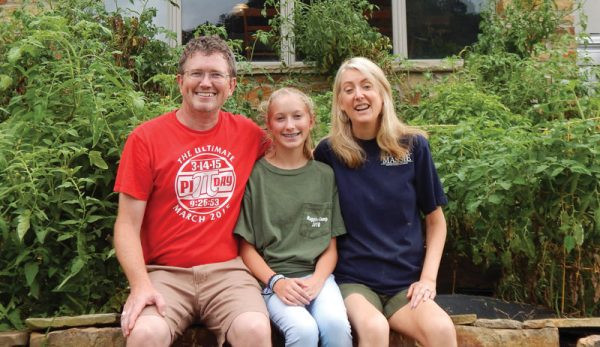 As you head east along Interstate 64 in Kentucky, you slowly but surely go from the bluegrass to Appalachia. As you approach the mountains on the other side of Lexington, you enter some of the poorest parts of modern America. But there, tucked away in rolling hills and mountains that run from Pennsylvania to Georgia, you find an enigma.

There lives a family of six. The husband, Thomas, and wife, Rhonda, both attended the Massachusetts Institute of Technology on scholarships.

Their off-grid house is powered by solar panels and Tesla batteries run by a custom-programmed computer. Peach and apple trees grow next to a fully automated chicken tractor, complete with its own rain catchment system.

The husband is Rep. Thomas Massie, a sitting member of the U.S. House of Representatives. The farm is home to the Massie family.

Distinctly Off the Grid

The Massies live and farm on about 1,000 acres of multigenerational family land in the northeast corner of Kentucky. But their homestead is unlike most anything youŌĆÖll find in Kentucky, if not in all of America, kind of like the people who inhabit it.

And itŌĆÖs not just because itŌĆÖs an off-grid house. (Though this already makes it a stand out.)

It all started when the couple decided to leave corporate life. Thomas and Rhonda founded an advanced robotics company straight out of college and lived in New England before moving back to their Appalachian homeland in their early 30s.

They dedicated almost a decade of their lives to building their dreamsŌĆöone tree, stone and story at a time.

Even while they were newlyweds at MIT, they werenŌĆÖt typical students, keeping a garden next to the student parking lot. Every year they have been married, theyŌĆÖve grown some of their own food.

The off-grid house, which measures more than 4,4000 square feetŌĆöwith a 2,200-square-foot basementŌĆöwas built by Thomas Massie, Rhonda and their children. But it isnŌĆÖt just any house.

Many years ago, a neighbor had told the family about timber-framed structures. After reading a book or two and attending a weekend workshop, Thomas laid out their home on a few sheets of paperŌĆöevery timber, every mortise and tenon.

Have fallen timber on your property? Make it useful with a portable sawmill.

They purchased a heavy-duty bulldozer and began to drag log after log out of their own woods. The family salvaged trees downed during a terrible ice storm that ripped through Kentucky in 2004.

They provided more than 95 percent of wood and stone used in their home. The only concessions were slate for the roof from VermontŌĆöthe scrap pieces they used for flooring in their bathroom and mudroomŌĆöthe cabinets and some wood casings for the windows.

With chainsaws, chisels and incredible tenaciousness, they crafted each timber and beam. Thomas even created his own 3-by-3s to replace 2-by-4s, giving him more flexibility as he framed out the structure.

The off-grid house contains just four metal fasteners. Worried that the two sections of the house might come apart as the timbers dried and the foundation settled, the Massies compromised with four massive assemblies that tie the two halves together.

Supplying your own wood is one relatively easy thing, but a house is far more than that. The Massies quarried stone from various parts of their property, creating floors, roofs, window and door headers, and the centerpiece of the great roomŌĆöa gigantic fireplace/hearth, complete with a wood-fueled pizza oven.

One would think the couple with two degrees from MIT were instead lifelong construction workers, given the care and craftsmanship found throughout the home. You realize when viewing the Massies’ homestead that off-grid building and living is far more about a can-do attitude than almost anything else.

For all its earthy materials, though, the off-grid house reflects the family.

Solar panels adorning the roof are the primary source of energy on the homestead. (Although they do have a backup generator.) But this is no standard solar setup.

Thomas Massie custom built the system, including last yearŌĆÖs upgrade. He made a roundtrip journey of about 20 hours to Georgia to get some Tesla batteries from a wrecked car. This improved the capacity and performance of the battery bank.

If you sit in the living room, a display tells you everything you need to know about the setup. ItŌĆÖs difficult to wrap your head around all the old-meets-new in the MassiesŌĆÖ home and life, where thousand-year-old construction techniques meet the most advanced modern computer technology.

Heat and hot water are provided by a radiant heat wood gasification system Thomas and Rhonda designed. (The unit proper came from Europe.) ItŌĆÖs fueled by the same woods that provided the timber to build the house.

In summer, the waste heat from a geothermal source takes over hot water duty. As a backup, they have an on-demand propane unit. Water comes from a well that Thomas and a neighbor dugŌĆönot drilledŌĆöand installed.

All this took time. The Massies devoted almost a decade of their lives to building something sustainable and beautiful on their familial landŌĆÖs hillside.

Learn how to build your own solar panels!

I first met Thomas Massie in the small, rural city of Staunton, Virginia.

If you know it, it might be because, like Thomas, you were there to visit the famous Polyface Farm and the Salatins who call it home.

As he walked into the hotel for an event we were both attending, I introduced myself. After pleasantries, he looked at me quite seriously and said, ŌĆ£you donŌĆÖt happen to need some eggs? I have a bunch in the back of my car, and if I get home with them still there, Rhonda is going to kill me.ŌĆØ

Now, this was quite unexpected. As a farmer, I am used to giving but not getting eggs. And when it comes to politicians, the only eggs I generally expect to get are rotten.

Massie admits to spying on Polyface via Google Maps to see what new things happen on the farm, what improvements are made and what projects are in the works. Then, whenever possible, he mimicks those on his place.

In Salatin style, the Massies raise grass-fed beef on their pasture. When I visited recently, they had just finished banding the new crop of beeves. After the Polyface event, Thomas and I kept in touch, trading phone calls and text messages about homesteading and farming.

My visit followed one of the strangest phone calls you could get from a sitting member of Congress.

It wasnŌĆÖt the kind of invitation you canŌĆöor want toŌĆöturn down. So I packed up my crew and headed east across Kentucky to spend a day or so with Thomas Massie and his family.

Their house sits high above the rolling valleys that make this region of the country what it is. The long, winding driveway seems normalŌĆögravel and dirtŌĆöuntil you get to the door and see the Massies waiting. The road holds a series of sensors so that any time someone approaches, they know it.

A small pond sits just below the house, home to their ducks. In the yard, a chicken tractor roofed with a┬Ā previous election cycleŌĆÖs ŌĆ£Vote Thomas MassieŌĆØ sign shows signs of having been freshly moved to new grass just a few hours prior.

An orchard sits on the south side of the house, just a little below and away from one of ThomasŌĆÖ favorite additionsŌĆöa walipini, or underground greenhouse.

They get peaches and apples in season from their orchard, accompanied by various produce just about year-round.

Growing their own isnŌĆÖt all that they are into, though. With childlike glee, Thomas asked us to go hiking and forage for chanterelle mushrooms that we could use in our dinner that evening.

A Work Still in Progress

The Massies started on their off-grid homestead some 20 years ago. After almost a decade, Thomas won his first election, and ever since, life on the homestead mainly happens during congressional breaks and holidays.

Like with any homestead, you begin to realize that it is, and probably will always be, a work in progress.

Many rooms in the house still need to be finishedŌĆödoors here, paint there, casing for windows, trim for bathrooms, and so on.

The orchard is undergoing another expansion this spring with numerous additional fruit trees. This is partly, Thomas says, because my son ate him out of apples and peaches after last summerŌĆÖs visit.

I mention this as a reminder for those who go off-grid and DIY: You need to learn to love not just the finished product but the process as well.

You need to appreciate not just the destination but the decades it will take to get there. The Massies embody both, and their immense joy and satisfaction in everything about their homeŌĆöfrom the stone hearth to the freshly butchered chicken in the ovenŌĆöreminds us to do likewise.

John Moody homesteads in the hills of Kentucky and is the author of The Frugal Homesteader Handbook.┬Ā He is fortunate to have a great wife, Jessica, and five fantastic kids.┬Ā Learn more them at www.abbyselderberry.com and www.homesteaderhandbook.com.