Tips For Starting Your Own Roadside Farm Stand

The rural roadside farm stand is a piece of Americana that makes for a fun and easy way to move your produce, products and wares. 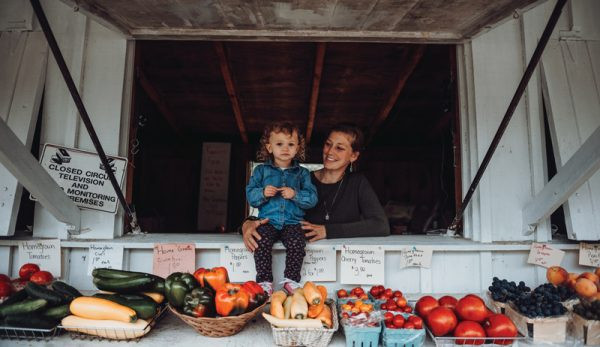 Roadside stands have endured for so long because they donāt require a lot of capital to run. A little creative ingenuity and some produce to sell is all you really need.

To give us some guidance on how to set one up, we talked to five farmers and producers who have successful stands.

Setting up a Stand

A roadside stand can be as simple as a cart with a few bins of veg or as elaborate as a small walk-in shop with a refrigerator.

Paul Meulemans of Wild Coyote Farm in Berrien Springs, Michigan, sells vegetables, microgreens, cut flowers and herbs from a stand on his property. He suggests starting out with a movable stand or one you can disassemble because you might have to experiment with different locations before you find the one that works best.

āMake it a small footprint, too,ā he says. āIt doesnāt need to be super large. You can put a lot of stuff in a small stand, especially if you make it vertical instead of horizontal. A vertical one makes a good display.ā

Mandy Bodie runs the Sweet Peach Roadside Stand in Ward, South Carolina, out of a 30-year-old peach stand that was given to her. She and her family remodeled it and painted it a bright sea-foam blue with artistic peach decals.

In addition to a large permanent stand, Emily Kwilos of Kwilos Farms in Angola, New York, has a small self-service shed with an overhang to shelter customers from the weather. She also has a small outhouse-style shed to the side where she sells the farmās maple syrup. Pettigrewās flower stand is made from a charming old truck with flower containers in the truckās bed.

Your stand can be manned or self-service. A self-service stand with an honesty cash box is a good choice if you donāt have the ability to stay there. Kwilos says not to leave valuable products, such as maple syrup, unattended. You also have to accept that there will be theft from time to time.

You make more sales with a staffed stand by explaining the produce, helping with selection, and providing information about you and your farm, how the produce is grown and how you care for the land.

Youāll also be there to refill the bins and protect your goods from theft.

Whether you need a permit for a roadside stand depends on your state and county. There may be a size restriction on your booth, rules on the kind of produce you can sell or how much you can sell from other producers.

It it time to start an honor system farm stand?

Your stand can be located wherever youād like, such as at the front of your farm, on a corner lot or off a busy road. (Make sure to check with your local laws first.)

Try to pick a spot near a popular place, such as near a tourist area. Pettigrewās has her flower stand near a public boat ramp. Bodie has her tree-ripened peach stand close to the local dam and swimming hole.

Kwilosā stand is on a busy road that catches the eyes of people coming home from work in the nearby city. āThey can pull right into our stand,ā she says. āIf we were on the other side of the road, they would have to cross traffic to get to us.ā

Consider parking, too. Can a car or two safely park near your stand? Is there a layby, public parking space or a quiet street nearby?

If customers have to struggle to get to your stand, they will most likely drive on by.

One of the benefits of a roadside stand is that its location is its own advertisement. However, having a little bit of advertisement can pay off.

Tamera Mark, who owns Iron Creek Farm in LaPorte, Indiana, says that people locate her place through farmers markets websites, so if youāre a vendor at a market, check to see if youāre listed there.

She also recommends a website called Local Harvest. There, you can make a listing for your farm stand and include information about yourself, your farm, your locations, hours of business and what products you offer.

Pettigrew recommends the Nextdoor app, too, which can help you draw in people from outer neighborhoods. Trail-blazing signs will point the way from the main road to your standās location, but you can also have a list of whatās in season, such as fresh corn, ripe strawberries and local blueberries.

Signs donāt have to be fancy. Kwilosā signs are made from a sheet of plywood cut into quarters. She pairs two pieces and hinges them at the top so they can be flipped around when the next product is in season. The paint should be fresh with appealing colors and design to catch the attention of passersby.

Kwilos sets her directional signs about a tenth of a mile up the road.

Donāt forget social media. Start a Facebook page where you can list comings and goings on the farm. Create an Instagram feed where you can show off pictures of your beautiful produce. Post every day, and remember to use hashtags such as #supportlocal, #localproduce, #localfreshflowers, etc.

Include your social media information on a sign on your stand, and encourage people to tag you on their posts.

Check out these 4 keys to marketing your farm and products online.

If your stand is staffed, have everyone wear matching aprons or t-shirts so that customers know who to talk to. A āuniformā also gives your stand a professional look.

āFill the baskets all the way up to the top,ā Bodie says. āWe display our peaches stems down because it looks more attractive. Remove any produce that looks damaged. And make sure to replace your produce as it sells. You want people to think you have a lot.ā

Keep things up off the ground so that people donāt have to stoop to see what you have. Decorate your stand to show off your personality. Kwilos puts a little ditty on her signs each year, such as: Three People, Two dogs, 400 Gallons of Syrup.

āBe your own walking Pinterest post,ā she says. Include recipes and bundle produce together so customers can find the ingredients easily, such as dill with the cucumbers to make pickles.

Depending on your stateās rules, there are various things you can sell on a farm stand such as chicken eggs, baked goods, preserves, pickles, and even rabbit and poultry. One benefit of having a roadside stand is that you can sell things youāve made in your own home, such as preserves and baked goods, that might require the use of an off-site kitchen if youāre selling to restaurants or stores.

Think about how youāll supply refrigeration if youāre going to sell things like greens that will wilt easily or eggs that by law must be kept at a certain temperature. A small refrigerator plugged into your house via a long extension cord can work well.

Bodie adds that your electricity company might be willing to set up a temporary power pole for you.

Paul Meulemans suggests checking wholesale prices on the USDA website and adding 30 percent. Also keep in mind that you can sell your produce cheaper at a roadside stand than wholesale or at a farmers market because your overhead will be very little.

Bodie says that itās important to keep prices simple so it wonāt be confusing for workers or customers. Sell by dollar so it will be easy to make change without having to use coins. The prices should be clear so that customers wonāt be confused or have to ask.

Weighing out produce with a digital scale on the stand can create a headache, and you may be subject to a visit by Weights and Measures. Therefore, preweigh and measure your produce to sell by the bunch, quart, pint, bushel, pint or amount.

To protect soft produce, purchase small reusable baskets. Fill the produce inside a prebagged basket. Instruct the customer to remove the bag and leave the basket. Bundle greens and secure them with a rubber band.

We pulled together some tips to help you price your produce for sale.

If youāre thinking of adding something new, look at the item in your grocery store to see if it is worth growing. āThe store might be selling the item so cheaply that people will be used to buying it for a low price,ā says Shelli Meulemans.

For instance, sweet corn is often sold for pennies on the dollar when in season. If you do sell common produce, make sure to educate your customers on the difference, such as the benefits of fresh farm corn and the amount of care needed to grow flowers.

Some items will fetch higher prices at your stand, however. Greens, such as kale and chard, are good examples. Stores often sell small bunches at high dollar, if all.

āWeāll sell a large bunch of kale for $2 on the stand when we have a lot,ā Meulemans says.

Heirloom vegetables with a backstory are also worth selling, such as the dried bean variety called the Mayflower, which is said to have come over on its eponymous ship. Include the story on a label or attached to the display.

Get creative about accepting money. Bikers and walkers might not have cash with them, so join āsend and receiveā money apps, such as Cash App, Venmo, Square and Paypal, and post the information inside your stand. This is also a good choice for self-service stands.

Kwilos keeps change in her apron pocket so sheās not tied down to standing by a money box or register.

Securely bolt your āhonesty money boxā to something sturdy so it canāt be stolen, and padlock the lid. Kwilos and Pettigrew, who have self-serve stands, say that sometimes the box will be short money and sometimes it will be over. And sometimes there will be an IOU.

Just like most things on a farm, a roadside stand can be a lot of work, but it can also be a lot of fun. Family and friends can join in by decorating the stand and signs, refilling produce and manning the stand to answer questions.

Your kids might even want to grow or make their own products to sell. Bodie says that her 10-year-old daughter became inspired this year to grow her own tomatoes to sell them on the farm stand and make her own money.

Most of all, a roadside stand can give you a chance to join the produce retail market without a lot of investment.