Hobby Farms talks with the author and small-scale dairy farmer about his new book, cheesemaking and how the restaurant business was a stepping stone to farm life. 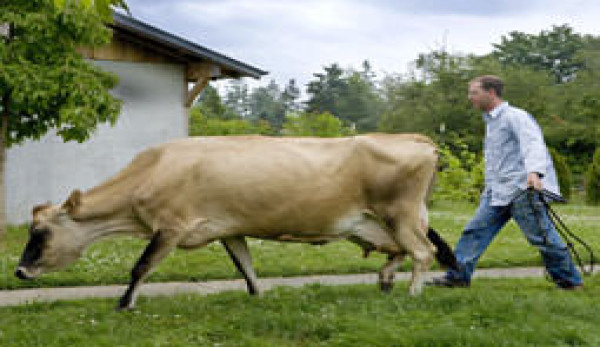 Growing a Farmer: How I Learned to Live off the Land (W. W. Norton & Company, 2011) author Kurt Timmermeister was born in 1962 in the heart of Seattle, nowhere near farm country. Anticipating work in foreign service, he graduated from the American College in Paris with a degree in international affairs. While in Paris, he realized his love of food and restaurants far surpassed his affinity for government work, and he returned to Seattle to begin a career in food service.

A series of restaurant jobs both in the kitchen and dining room motivated him to open his own cafĆ© at the age of 24. For 18 years, he ran a series of ever-larger CafĆ© Septiemes while at the same time beginning his education in small-scale farming.

In 1991, he moved to Vashon Island, Wash., buying land that was to eventually become Kurtwood Farms. The farm began as 4 acres of overgrown blackberryĀ brambles and a canopy ofĀ weeds with rusted-out cars and cast-off junk hidden beneath. Little by little, the land was cleared and planted with fruit and nut trees, vegetables and herbs. More land was acquired, pastures were created, and sheep, pigs and cows arrived. By 2003, with his restaurant career behind him, Kurtwood Farms had become his full-time job.

Soon, a professional kitchen was built to process the food grown on the farm and to create a space for friends to gather for dinners. A Grade A dairy was licensed in the newly built dairy buildings, a cow barn was raised and an underground cheese cave was dug deep beneath the cow pasture, all with the goal of producing fine farmstead cheeses.

Kurtwood FarmsĀ is now home to a small herd of Jersey cows; a motley crew of sheep; happy, free-rooting pigs; an ever-changing flock of chickens geese and ducks; a guest room and sofa often filled with Seattleās best cooks; and Timmermeister and his two dogs, Byron and Daisy.

Hobby Farms: When you were writing Growing a Farmer, did you have any idea the book would take off and you would become a voice for small-scale agriculture?

Kurt Timmermeister: I am most flattered if Growing a Farmer has become a voice for small-scale agriculture. The nature of the process of writing a book is that itās a simple matter of pushing āsendā to convey the electronic file to my publisher in New York. It is hard to get a sense from that what effect it will have.

My goal for writing the book was certainly to influence people across the country who want to grow their own food and own their own farms. It was very important to me that Growing a Farmer include three distinct ideas: first, that there are problems in small farms. I had many challenges along the way and was always surprised and intimidated to find that most of the small-ag books out there only have the rosy picture of farming. Second, I wanted to include details on the economics of small-scale farming. I want people to have a clear idea of what is ahead of them in a financial sense if they decide to farm full time. And lastly, I very much wanted details of slaughtering of animals. Eating meat is such a part of our diet, and I wanted even those folks living in the city to know what is involved.

HF: What is the most important piece of advice you can offer to someone just starting out?

KT: The best piece of advice I can give to someone starting out is to not give up. Sounds quite simple, but I wanted to quit many times. I am very glad I kept at it and that I persevered after all these years.

HF: What are the must-have items for beginning cheesemakers?

KT: The must-have items for a beginning cheesemaker include, first off, access to great milk. It is possible to make bad cheese from great milk, but it is impossible to make great cheese from bad milk. I spend a great deal of time and effort here at Kurtwood Farms ensuring that the cows are especially healthy and that the milk is clean, very fresh and healthy.

After great milk, I think what is necessary to making great cheese from the beginning is an attention to detail and the ability to take notes. It is especially easy to forget how a cheese was made a month or 12 months earlier. With proper log notes, it makes it possible to find a problem and correct it.

HF: How are you able to balance all that you do on the farm with your writing?

KT: I am able to balance the farm with writing because I have a very short attention span! I need to constantly be doing different tasks. I milk the cows, then I write for a bit, then I feed the chickens and the pigs, then I come back and write a bit more, and so on throughout the day. If I had to do anything for eight hours, I would go crazy. It is probably the biggest reason I have never worked in an office.

HF: How did you know it was time to leave the restaurant business and make farming your full-time employment?

KT: I chose to leave my restaurant behind and farm full time because I was no longer challenged. I need to be constantly challenged in the work I do. I had owned the restaurants for close to 20 years, and I was very good at it. I had no interest in spending another 20 just doing the same tasks every day. I especially like to be scared. Knowing that I had to make a living by farming got me good and scared and compelled me to work hard and try new things. Writing is my new challenge, as well as working on new cheeses.

HF: Is there anything else you want Hobby Farms readers to know about you and Kurtwood Farms?

KT: I would like the readers of Hobby Farms to know that anything is possible in small-scale agriculture. I believe that small farms located just outside of the cities on a few acres will be an important source of local food in years to come. We simply have to believe that itās possible.