Give the same old crops new uses in the kitchen this year and don’t let any part of the harvest go to waste. 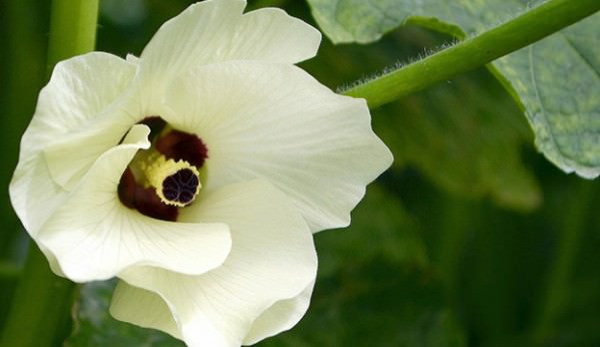 Among the food one intends to grow is the all the food we grow unintentionally––the edible weeds, sure, but also the forgotten edible parts of the plant. We get tunnel vision, forgetting about the flower, leaves, stalks, roots and stems. But the reality is, there is a lot of good food hidden among the good food that, for some, may be more exciting than the intended crops. Don’t like okra? Give the flowers a try! Bored with summer squash after the first week, not to worry—there’s more food there than we may realize.

If you’ve ever grown broccoli, cabbage or cauliflower you have probably taken a double take at the leaves and thought, “Hmm, sure looks a lot like kale.” Well, the good news is, it tastes a lot like kale, too! Being from the same botanical family, they share many flavor qualities. Although broccoli leaves take a bit longer to cook, they can be slipped in anywhere you might use kale. Harvest the leaves sparingly while the plant is still growing or wait until after the head is gone, so as to not slow down growth of the broccoli head.

Popular in many Asian dishes are the vines of squash––generally winter squash. They are pruned back when still young and tender, or grown tightly together specifically for the vines and then bunched and sold. Be judicious when harvesting vines off plants you hope to get fruit from: Taking the vines stunt the squash in some cases or lower yield. Also, if your hands are sensitive to squash vines, use gloves to pick and prepare.

Classically, squash vines are added to soups or stews, but they can also just as easily be steamed or braised in coconut milk as a side dish. The flavor is somewhat meaty, and they cook relatively quickly, like most greens. It would be hard to go wrong no matter how you cook them.

Some gardeners may not realize that the male flowers, which account for more than half of the flowers on summer squash vines, do not produce fruit. That said, they do make a good treat. Males flowers are easily identified by the long stems they grow on, and by the lack of a bulb at the base. Females tend to be less numerous and grow on shorter stems with small squash forming at the base of the flower—they’re also edible, but if you take a female flower, you take a squash, too (which may be fine after a few rounds of squash).

Pop off the male flowers in the mornings when they just begin to open—leaving a few in tact for pollination. Stuff them with crab meat, chicken salad, goat cheese or your favorite filling, and then bake. They also make for great garnish for fish, chicken and salad.

As you will no doubt notice, the blossoms of fruiting plants are typically edible, and this is true for okra flowers (pictured above), as well. Okra flowers lack much of the mucilaginous texture people dislike in okra while retaining that distinct okra meatiness. Stuff them as you would squash blossoms, throw them in a salad or use them to garnish your gumbo. Of course, remember that to take a flower is to take an okra pod, but a worthy sacrifice from time to time.

Whenever you’re picking beans this summer, keep a small cup with you to pop off a handful of the flowers. Bean flowers are especially fun for decorating salads, but can also be nice as a garnish to the main course. They are sweet, colorful and need very little help to be tasty.

Although not particularly edible, corn husks are used in preparation of many great dishes. Dried husks can be used to make steamed tamales, which is a surprisingly fun and simple project for the whole family. Fresh off the ear, they can be used to make fresh koji, the main ingredient in miso and soy sauce. In his book The Art of Fermentation (Chelsea Green, 2012) Sandor Katz makes koji by steaming rice or barley, wrapping it in a husk, and leaving it somewhere warm and humid (80 to 95 degrees F) until colonized. Then, you can use that to make your own miso, or just eat it as is. I’m not sure why more people don’t do that––koji is delicious!

Often utilized in Middle Eastern and Mediterranean cuisine, grape leaves can be prepared in a variety of interesting ways. They can be stuffed with chicken and rice, used for tannin in pickling, lacto-fermented alone, or added in small amounts to soups and stocks. Harvest the leaves when they’re big and young, but don’t pick too many or you risk harming the grape yield. This, along with their complexity of flavor, is why wild vines are a nice source for grape leaves.

It is hard when you harvest carrots to see anything but the beautiful gold (or white or red or yellow or purple) root in front of you, but don’t overlook those carrot tops. On their own, they’re not the most impressive, but when blended into pestos, blanched for a side salad with nuts or added to soups, they can be quite a treat.

Sometimes the summer just comes on too fast or the winter comes unusually late, and your brassicas—kale, arugula, broccoli cabbage—begin to bolt. This is always a little sad, but it doesn’t have to be a bad thing. Promptly after these plants put out their stocks of yellow flowers, they begin to make long, bean-like seed pods, tasting similar to the intended crop: Radishes will be a little spicy, kale will be a little hardier, etc. They are most enjoyable when they’re green and tender. Try them in salads, pickled or eaten right there in the field where they are at their sweetest.

There are certain lettuces prized not for the heads they make, but the stalks they produce when they begin to bolt. Cracoviensis lettuce, for instance, is a wonderfully rich, sweet green that makes a family-sized head but is actually cherished in certain parts of the world for its stalk—some call it “asparagus lettuce” for the flavor. It can be chopped up and added to stir-fries and soups—a cold bolted lettuce and potato vichyssoise might just hit the spot in the middle of a hot summer.