10 Tips For The Perfect Pizza

From the crust to the toppings, more goes into making a drool-worthy pizza than simply piecing ingredients together. 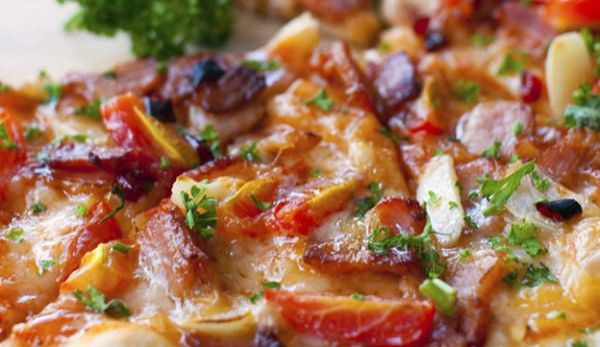 As a child, I made a pizza using some old cardboard, my scented markers and a bit of glitter. As an adult, my first attempt at baking a real pizza probably didn‚Äôt taste or look as great as my childhood creation did. My kids picked the unburned cheese off the top, and my dog gagged on the slice slipped to him under the table. You could say I learned the hard way how not to make a pizza.

Pizza is a meal unto itself. It contains few ingredients yet tastes like a four-course meal. It looks so simple, but can be so easy to mess up. But don‚Äôt fear. Following a few basic pizza-making tips can set anyone‚ÄĒyes, even me‚ÄĒon the path toward success. I can now make a perfect pie that even my kids (and dog) adore.

1. “Dough Not‚ÄĚ Mess Up the Crust

The dough is where vital work must take place first before you can think of moving on to the “prettier‚ÄĚ aspects of pizza making.¬†The crust is the key to the whole dish and defines the pizza. Many experts believe a good pizza dough begins with a blend of quality, high-protein, all-purpose flour and wheat flour in a 3-to-1 ratio. All-purpose flour alone won‚Äôt create the beloved crust texture. The yeast needs to be activated and dissolved first in order to avoid a bland crust.

Once you‚Äôre ready to start working with the dough, make sure the temperature is right. Once it is, don‚Äôt waste time.

“Cold, out-of-the-fridge dough is not elastic,‚ÄĚ says Gabriele Corcos, host of “Extra Virgin‚ÄĚ on Cooking Channel and author of UndertheTuscanGun.com. “It will keep shrinking while you try rolling it. On the other side, dough kept out of fridge will keep rising and eventually start developing a sour flavor. Pizza dough can last at room temperature no more than 1 hour past its ideal proofing time.‚ÄĚ

You don‚Äôt need to spin a huge disc of dough on your fingertips to create the perfect pizza. Throwing dough stretches it and gives it some elasticity, but to do it perfectly and not have your dinner wind up on the floor (guilty!) takes practice. It‚Äôs absolutely possible to roll your dough on top of parchment paper and create a delicious crust.

On that note, kneading the dough too much‚ÄĒeither by hand or in a machine‚ÄĒwill produce a disastrous crust.

“Overworking the dough results in tough, chewy [crust],‚ÄĚ says Erik Freeberg, chef di cucina at Bar Toma in Chicago, ranked¬† by Food & Wine Magazine as one of the best pizza places in America. “Don‚Äôt touch it too much.‚ÄĚ

Putting too much sauce on your pizza is a surefire way to destroy it. In fact, many chefs say the sauce should just “kiss the dough.‚ÄĚ If there is enough sauce to finger paint with, you‚Äôve used too much.

“Pour a spoonful in the center of the dough, and slowly, in a spiral movement, lay the sauce toward the edges of the dough,‚ÄĚ Corcos says. “Never, ever, ever put too much condiment on your pizza. The dough won‚Äôt cook properly, loading and unloading from the oven will be a nightmare, and pizza slices will spill ingredients all over the place.‚ÄĚ

Nothing can ruin a homemade pizza faster than a rubbery, soggy crust. Who wants to bite into a pizza pie that feels as chewy and damp as a wad of bubble gum? (Yes, that is the colorful way once used to describe my pizzas.)

Thankfully, this mistake is easily remedied: Use less sauce or oil. Adding too many toppings‚ÄĒespecially those that release a lot of liquid, such as¬†fresh tomatoes and zucchini‚ÄĒalso will result in a less-than-crispy crust.

A too-thick crust won‚Äôt cook properly, either, and can result in a mushy mess. “Traditional Italian pizza is paper-thin,‚ÄĚ Corcos says. “Keep rolling that dough!‚ÄĚ

Another soggy-crust culprit is a too-cold oven. Pizza usually should be cooked between 450 to 500 degrees F.

5. Raw Is Wrong, and Burned Is Bad

As bad as soggy pizza is, burned pizza is worse. When cooking at high temperatures, keep an eye on the timer, and check the pie to make sure it browns on the top and at the edges. If the crust starts to look like a car tire, you‚Äôve gone too far. Don‚Äôt confuse properly browned with burned, though, especially when it comes to the toppings, Freeberg says char is a good thing.

Also don‚Äôt put raw ingredients on your pizza; they won‚Äôt finish cooking before your crust is ready and might give your dinner guests a whopping helping of Salmonella. Meats, like raw chicken and sausage, and raw vegetables, such as onions, eggplant and potatoes, should be cooked beforehand. Then they simply require heating up on top of the pizza.

All pizza ingredients should work well together without one overwhelming the others. Beginning pizza makers will often throw everything they love on top of a pizza and create a giant, conflicting mess. Don‚Äôt make a “kitchen sink‚ÄĚ pizza disaster. Focus on a few solid flavors, and add half of what you think you should on top of the crust. Remember: Less is more. Master pizza chefs recommend about four or five toppings per pizza, including the sauce and cheese.

Try to not bunch up all of your toppings. You don‚Äôt want a piled-high pizza pie that looks like a giant tostada salad. Layer each piece of meat or vegetable so that you still can see some cheese and sauce underneath. Leave breathing room between the toppings. Don‚Äôt lump everything in the center, either; spread out the toppings to the far reaches of the crust.

A mistake beginners often make is buying cheap mozzarella cheese, thinking that‚Äôs the only choice. Nope. Pizzas can and should feature a variety of different types of cheeses, from crumbly feta to rich cheddar.

Make sure to use high-quality‚ÄĒeven homemade‚ÄĒcheeses to minimize any grease, which is sure to ruin the pie. Pick cheeses that work with the toppings you‚Äôve chosen, and don‚Äôt add buckets of it. Remember: You want each ingredient in a pizza to complement and enhance the flavors of the others. If everything is suffocated under a greasy cheese blanket, that won‚Äôt happen.

“I personally like to grate my mozzarella and spread it on a pizza almost like seeding a field, slightly spilling grated cheese out of my hand,‚ÄĚ Corcos says. “I find slices of cheese tricky, as they might make the pizza wet.‚ÄĚ

Waiting for that gooey, bubbly, garlicky slice of heaven to emerge from the oven can be torturous. Take a deep breath and wait. If you pull the pizza out of the oven too soon, a soggy crust and unbrowned toppings might occur. Timing is everything when it comes to baking pizza.

Even once the pizza slides out of the oven, wait. Yes, wait. We‚Äôve all launched ahead, grabbed a too-hot slice and just about burned a hole through the roof of our mouths. You know you have. Wait about two minutes for the pizza to settle; then cut a slice, and enjoy.

Do you think that Gorgonzola, pear and bacon sound divine? Try it. Love the marriage of spinach and artichoke hearts? Serve it up. Pizzas cry out for experimentation, so have fun trying different topping combinations. Don‚Äôt feel locked into the same mozzarella-pepperoni-marinara combination week after week. Take a chance. It‚Äôs only pizza.

Kyra Kirkwood is a Southern California-based writer. When she is not teaching journalism; writing articles, books or her blog; or experimenting with recipes, she enjoys spending time with her husband, two children and special-needs rescued dog.