Predators come with the territory when you're keeping chickens, unfortunately. But here are 10 ways to keep your feathered friends from becoming an easy meal. 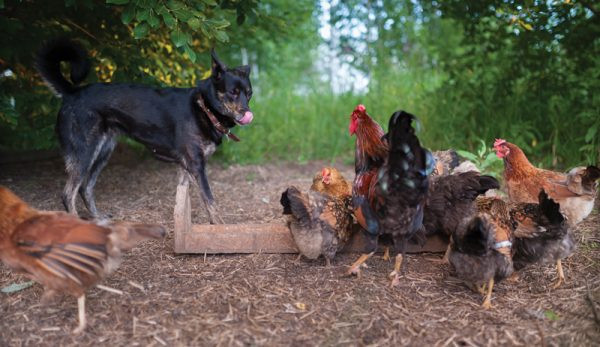 It hurts to lose a chicken you‚Äôve lovingly raised from a cute, fluffy chick‚Äîto go out one morning and find Henny Penny mysteriously missing or worse, discover a shocking scene of bloody, feathery carnage. Not only does it hurt emotionally, but for those whose livelihoods depend on their flocks, it hurts financially, too.

So it seems almost a sacrilege for me to confess the following.

Even though I adore my chickens and hate to sacrifice even one to a coyote or other wild thief, I don‚Äôt blame the predator for doing what predators do to survive. Furthermore, I refuse to take a lethal approach to retaliate for any depredations‚Äîwith one exception.

Blame it on my volunteer work at a zoo as a teenager and, later, a seven-year stint as a wildlife park keeper. Working around tigers, cougars, wolves, foxes, raccoon, eagles and other predators, I became completely enamored with these oft-maligned animals‚Äô beauty, intelligence and strength‚Äînot to mention their critical role in nature, keeping prey populations in check.

My deep affection for predators has lasted to this day.

And yet‚ÄîI really, really don‚Äôt want them eating my chickens. Happily, my husband and I have lost surprisingly few birds in almost 30 years of keeping various poultry on our Washington hobby farm. I hope our time-tested tactics below will help you protect your chickens from predators, too, to avoid the pain of losing a feathered friend.

1. Figure out Who Done It

Unfortunately, chickens are vulnerable to a dismaying number of predators, from petite weasels to brawny bears. Some‚Äîthink raccoon and coyote‚Äîare widespread, occurring in country and town, while others have more limited ranges.

In general, though, raisers residing in different areas deal with a slightly different cast of potential poultry thieves. On our farm, for instance, we‚Äôve only seen a fox and signs of a bear once. Raccoons, opossums and great horned owls, however, visit regularly.

If you‚Äôre new to an area or new to chickens, ask neighboring livestock raisers about predators they‚Äôve encountered and their strategies for foiling them. Anticipating which species may visit‚Äîand what their modus operandi is‚Äîcan help you better protect your flock. (See ‚ÄúThe Dirty Half Dozen,‚Äù below.)

Tip: Keep in mind that predation can vary with season and migration patterns, too. We‚Äôve learned to be especially vigilant during frigid or snowy weather.

Survival for a predator poses a daily life or death challenge. They can‚Äôt afford to expend an enormous number of calories pursuing prey or expose themselves to an enemy‚Äîsay a human with a gun.

Sure, coyotes, wolves and many other predators can and do kill healthy animals. But typically they have better success going for easier meals: the old, sick, young and weak. This is one reason why predators are so important for healthy ecosystems.

It‚Äôs also why our domesticated biddies‚Äîconfined, exposed, less wary than wild birds‚Äîmake such tempting targets. So look at your poultry set-up/routine as if through a sneaky, opportunistic predator‚Äôs eyes. And keep reading for suggestions on how to make your chickens as hard for predators to get as possible.

Read more: Here are some additional tips for protecting chickens from predators.

3. Tuck Your Birds In

Many poultry thieves prefer operating under cover of darkness, or in the early morning and evening hours. Allow your birds to range and roost freely during this timespan, and you‚Äôll likely lose some.

Over the years, we‚Äôve had this lesson drilled into us a few times‚Äîmost recently when a reckless hen hid out one night. Try as we might, we couldn‚Äôt find her. The next morning, all that remained of our clucky friend was a trail of pretty barred feathers leading to the fence.

Fortunately, chickens are creatures of habit and easy to train. We start by confining our growing pullets to their permanent coop until they‚Äôre larger and less vulnerable. At the same time, we show them that home is where the food and yummy mealworm treats happen.

We also use treats to teach them to come when called. Once released into the great outdoors, our hens normally return to roost as the sun sets or when summoned. Then we lock them in for the night, resting easy that they‚Äôll be safe.

The coop structure where our Barred Rock hens spend each night consists of an outer pen constructed of strong, tight hardware cloth well-stapled to a wooden frame, with a solid corrugated plastic roof. The girls climb a ramp and enter through a pop-hole door into an upper ‚Äúapartment‚Äù roost/nest-box area made of sturdy cedar boards.

I like having this portion of the coop elevated because predators can‚Äôt move in below the chickens. All outer doors have secure latches, and the pen frame sits on flat concrete blocks to help thwart diggers. We‚Äôve had this coop for over three years now and thus far it‚Äôs kept our flock safe and sound.

Would it stand up to a bear? Probably not. But as noted, bears visit our farm rarely, if ever.

When choosing or constructing a coop/pasture pen, steer clear of flimsy chicken wire or any gap-ridden pen covering that allow weasels to slip in or raccoons to reach through with their dexterous paws.

We once had a raccoon rip right through some chicken wire‚Äîwith deadly results.

Years ago, after tragically losing a sheep and several ducks to roaming dogs, my husband and I resolved to boost our property‚Äôs perimeter defenses. A fence now surrounds our 5 acres, and much of our land also has an inner buffer fence for extra protection.

Additionally, we‚Äôve used interior fencing to block our poultry from entering a woodlot and the exposed pastures distant from the house. Our barriers include a mix of 4- to 5-foot welded-wire field fence, hog panels, wooden fence and nonclimb horse fence.

We especially like the latter because of the small openings. My husband once watched a coyote squeeze through some regular field fence.

Remember that fences won‚Äôt discourage every predator. Coyotes are excellent jumpers and diggers, for instance, and raccoons are talented climbers.

Some raisers bury their fencing to bar diggers or use hot wire along the top for added security. Others swear by livestock guardian dogs to protect their charges.

Tip: Consider motion-sensitive security lights near the coop area as another deterrent.

We discovered the dangers of neglecting this task years ago after a coyote picked off two free-roaming chickens in as many days. When we belatedly surveyed our fence, a massive hole had been dug beneath one secluded section.

Simply filling the excavation with large rocks, coupled with banning our flock from the pastures, persuaded the coyote to look for prey elsewhere.

These days we‚Äôre much more careful about performing regular fence and coop/pen checks. When scrutinizing your own defenses, watch for signs of digging, damage to fences/wire mesh, and new holes, tunnels or gaps.

Avoid feeding predators on your property‚Äîeven cute ones like raccoons. Doing so can cause predators to lose their fear of humans, hang around and at some point they may turn their hungry attention on your chickens.

If you can, also refrain from leaving food outside for your pets. Or promptly remove it after they‚Äôve eaten their fill.

Leftovers can attract wild predators to your property, along with feral dogs and cats. Ensure feed and garbage cans are properly secured against wild raiders, too. And don‚Äôt forget to collect eggs daily. Letting them pile up can attract hungry critters as well.

Many raisers protect their flocks by keeping them confined 24/7 in covered pens. If your birds live in uncovered digs or roam by day, however, trees and shrubs can offer protection.

A friend of mine, for example, has a large, spreading fir tree that her flock hurries to hide beneath when raptors appear. My own hens often shelter beneath a sprawling grapevine.

Remember, though, that low vegetation crowding your birds‚Äô home can serve as unintentional cover for a sneaky raccoon, fox, weasel and the like.

9. Be Diligent on Rodent Control

While a a full-sized chicken has little to fear from a rat, a tiny chick is extremely vulnerable to these stealthy omnivores. Additionally, an abundant population of rodents living among your poultry will attract hunters who may get sidetracked by the prospect of a chicken dinner.

On our farm, we attempt to keep rat populations down by eradicating potential nest sites and hideouts‚Äîlike brush or junk piles‚Äîand cleaning up feed messes. Here‚Äôs where we make an exception to our no-kill policy, using snap traps when necessary and with caution to avoid killing nontarget animals.

We never use poison baits, which endanger pets and wildlife.

Read more: Keep rodents in control in and around the coop with these tips.

Again, remember that your adorable peeps are defenseless. If you‚Äôre raising chicks in a brooder set-up, secure it against rats, pets and small children. We raise our chicks in a mudroom rather than a garage or outbuilding, just to be on the safe side.

If you let a hen raise her brood, consider keeping the family in a protective pen instead of letting them roam free‚Äîat least until the chicks grow large enough not to be easy crow, rat or snake bait.

Sidebar: The Dirty Half Dozen

You can‚Äôt know what to do if you don‚Äôt know who‚Äôs doing what. Before you implement your predator-proofing plan, find out what potential threats are likely in your neck of the woods.

Man‚Äôs best friend has been one of the most frequent and damaging livestock predators on our farm. While wild animals generally hunt to eat, roaming dogs will kill for the fun of it.

Look for birds that have been killed or maimed but not taken away or eaten.

The clever raccoon is omnivorous, dining on frogs, mice, eggs, fish, fruit and more. Along with helping to control prey populations, they also disperse plant seeds in their droppings.

Look for bite wounds on the chicken‚Äôs back, plus gnawed heads and breasts. Given the opportunity, a raccoon will also reach into pens to grab slumbering birds and pull them partly through the wire (ick).

These savvy predators will usually snatch chickens whole and skedaddle, leaving scattered feathers in their wake. Both are omnivores who eat a wide variety of foods, including rodents, rabbits, insects, carrion and fruit.

Some studies have shown that lethal control of coyotes can actually increase populations and livestock predation.

These sinuous carnivores are exceptional hunters of rodents, rabbits and other small animals. Capable of squeezing through very small holes, weasels usually deliver a killing bite to the back of the head.

Sadly for farmers, a weasel triggered by panicking fowl may kill more birds than it can eat‚Äînot for fun but due to its high metabolism, voracious appetite and caching instinct.

Sometimes these powerful raptors will carry off the entire chicken, but often a hawk will eat their prey at the scene. Look for lots of plucked feathers scattered around. If the carcass remains, a munched head and neck indicate an owl, a bird that also normally operates by night.

Birds of prey are legally protected, and for good reason. If it weren‚Äôt for these incredible hunters, we‚Äôd be up to our ears in rodents, rabbits and more.

If you‚Äôre missing chicks in the morning or find one partly eaten, a rat is the likely culprit. Female brown rats begin reproducing early and can have up to five litters a year.