10 Vegetables You Can Grow Hydroponically

Soil isn’t needed and the change of seasons won’t hold you back if you grow these crops in a hydroponic garden. 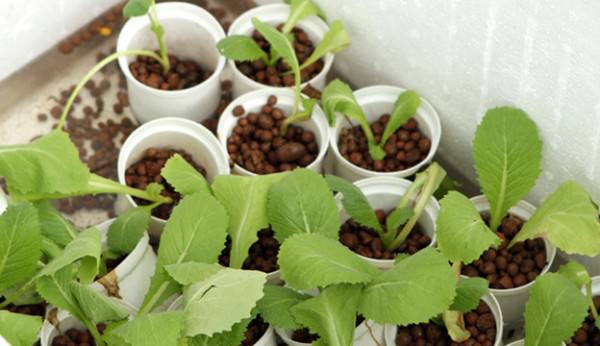 Have you ever wanted to enjoy a salad made with home-grown ingredients in the middle of winter? There are numerous vegetables that you can grow any time of year if you grow with hydroponics, a growing method that uses a nutrient-water solution instead of soil. Not all crops respond well to aquaculture, but several staple crops that you likely buy in the grocery store can be grown hydroponically. You’ll want to get the basics of growing in a soilless medium under your belt before attempting root vegetables like carrots or turnips, but the following 10 crops should be fairly easy to grow with proper lighting, nutrients and temperatures.

Greens are arguably the easiest crop to grow hydroponically. They have quick turnarounds and are more forgiving if light levels aren’t quite as high as they should be. Most greens can go from seed to harvest in less than 60 days.

This includes all varieties of lettuces, with the exception of large head types, like icebergs, bibb lettuces, romaine lettuces and any loose leaf types will do well. You can easily mix varieties, too, and have several types growing at the same time.

Spinach varieties are a good choice for hydroponic greens, as they respond well when temperatures are a bit cooler. The other main benefit to growing hydroponic spinach is that so long as you do not cut all of the leaves off of each plant, they will grow back and you can get multiple harvests from the same plants.

Like spinach, kale grows well in cooler temperatures, and each kale plant can regenerate and provide nutritious leaves for several months or more. Both flat-leaved types, like Dinosaur kale, and ruffled-leaf types do well in a hydroponic environment.

Your salad greens aren’t limited to the color green. Swiss chard is another crop that will grow well in hydroponics with the added benefit of being colorful. Rainbow types of Swiss chard not only liven up your plate, they’re chock full of phytochemicals that your body will appreciate.

Herbs are a great type of plant to grow hydroponically, as they don’t take up much space, rejuvenate well after harvest and retain more of their aromatic oils when grown in hydroponic systems as opposed to field cultivation. They take longer to mature from seed than most crops, but will provide continuous harvests for much longer durations, as well.

Basil is, by far, the most popular culinary herb to grow hydroponically. Like lettuces, mix up basil varieties for a full spectrum of flavor. Sweet basils, lemon basils, purple basils, lettuce-leaf basils and cinnamon basil can all be grown successfully in hydroponic systems.

Rosemary will take much longer to mature than basil, but a healthy rosemary plant can provide you with its pine-like flavor for potentially several years. Like basil, rosemary does best in warmer temperatures.

Mint is in the Salvia family and as such, wants to grow far and wide. Mint might grow too well for you, but is a great standby to have for your baking, teas and adult beverages. One or two plants of mint in your hydroponic garden should be plenty to keep you well stocked with the signature ingredient for your mojitos.

Vining vegetables require more space and a trellising system for support, but they’re no less difficult to grow hydroponically than herbs and greens. They do, however, require more light, higher average temperatures and more time to mature from seed to harvest.

Tomatoes have been grown hydroponically for many decades. Prepare to keep these well staked so that the leaves don’t dip into the water and rot. Be wary that tomatoes often attract pests, such as whiteflies, but as long as your hydroponic setup is clean, you can be slicing fresh tomatoes for your sandwiches long before your neighbors even get theirs planted for the season.

Peppers are related to tomatoes and require similar cultural environments, making them a great companion plant to be grown in the same hydroponic garden. Peppers should not need to be trellised like a tomato plant, but expect to at least stake them up as they grow so that their branches aren’t weighed down by the peppers. Both hot and sweet varieties can be grown hydroponically.

Cucumbers can be grown as warm-weather vegetables any time of year, as long as the light, heat and humidity levels are high enough. A healthy hydroponically grown cucumber plant will take about two months to mature but will provide you with fresh cucumbers for two to four months before starting to show signs of senescence.

Chris Bond is the Horticulturist, Farm Food Program Coordinator at Case Western Reserve University Farm and an instructor at CWRU's Siegel Learning Program. He’s been the lead on the Farm's initiative to grow food without using synthetic inputs since the program's inception in 2009. Bond is also the host of a weekly radio program devoted to sustainability, "Keeping it Green," heard on Northeast Ohio’s WINT 1330 AM.