Slow Food is working to bring biodiversity back from the dismal 30 plants that provide 95 percent of our food. 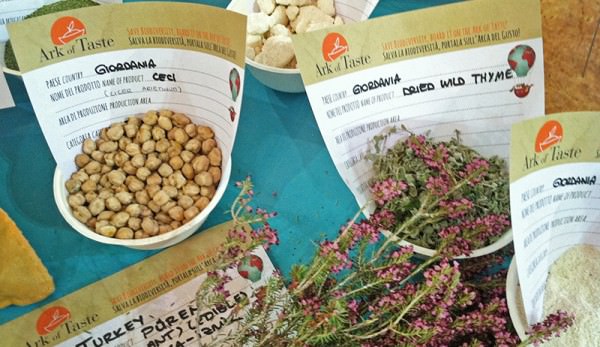 There are more than 7 billion people in the world and just 30 species of plants providing nearly all of our food, according to the United Nations Food and Agriculture Organization, and food-diversity advocacy organization Slow Food is raising the red flag through its Ark of Taste.

You probably already know about the Slow Food Ark of Taste—it’s a collection of small-scale food products that are in danger of extinction, all cataloged and celebrated with the hope that these traditional foods can be preserved. There were 2,944 items on the Ark of Taste of of this writing, and Slow Food is putting out a call for 1,000—seriously, one thousand—new items to be added to the Ark of Taste before the Terra Madre international conference in September 2016.

From the Slow Food blog:

“Through the ever-increasing nominations, the Ark will become more than just a catalog. It will be an archive in constant movement, acquiring information without end. As well as having the crucial role of preserving the memory of food biodiversity, the Ark is also a tool that can motivate someone to protect a food of their childhood. Seeing such a food recognized by the global community, along with their surrounding environment and the people around them, can be a powerful inspiration.”

This is especially true in developing regions of the world, where the convenience and novelty of Western foods and traditions are pushing out the cultural and nutritional value of indigenous foodways. I’ve seen this juxtaposition myself while traveling. For me as a visitor to these places, their traditional foods are the novelty, but for many cultures, the Americanized food system that I grew up with is grand. So it’s easy for local customs and foods to slip away as generations are removed from the old ways of cooking and eating.

Slow Food’s Ark of Taste push could not be coming at a more vital time.

“Some 30 crops account for 95 percent of human food-energy needs, and just five of them—rice, wheat, [corn], millet and sorghum—alone provide 60 percent,” the FAO says. “Yet more than 7,000 plant species have been gathered and cultivated since people first learned to do so many millennia ago. And there are as many as 30,000 edible terrestrial plant species in the world. FAO estimates that in the last century, about 75 percent of crop genetic diversity was lost as farmers worldwide switched to genetically uniform, high-yielding varieties and abandoned multiple local varieties.”

Think about the food traditions you grew up with, the foods your family once valued, and the stories of cooking methods and ingredients of your family’s past generations. Chances are, you or someone you know continues to grow and save seeds of an unusual heirloom variety or still practices a food-preparation method that’s not common in today’s fast-food culture. These are the stories that Slow Food needs to hear!

Traditional foods and food traditions are dying, but they’re not yet dead, and you can help to bring them back. Get in touch with your local Slow Food chapter, and work with them to enter your food item into the Ark of Taste nomination process.

Also check out Bread Wine Chocolate: The Slow Loss Of Foods We Love, by Simran Sethi, for a read that will tie biodiversity to the food you eat in ways you might not have thought about before. Sethi also has an excellent article about our frightening biodiversity situation in The Dallas Morning News.