Discover the profit potential of raising and selling pastured heritage pigs for pork. 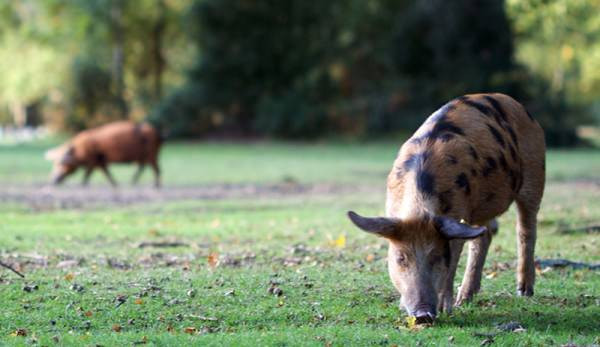 When was the last time you sank your teeth into a real pork chop? Not a dry, tasteless chop from the supermarket but a succulent, rich chop from a heritage pig, pink-fleshed and juicy with a nice lacing of fat along the edge. That‚Äôs the type of meat hog farmers produced before factory-farmed pork pushed old-fashioned breeds to the brink of extinction. Now many of those breeds are back, and with them comes the flavor of luscious country pork.

Today‚Äôs consumers pay top dollar for humanely raised, flavorful pork. If you‚Äôd like to raise pork for today‚Äôs niche markets, look to heritage breeds to deliver the goods. The Livestock Conservancy has yet to define ‚Äúheritage pork.‚Äù Some say it‚Äôs meat from historic breeds; others insist that only Conservancy-listed breeds produce heritage pork. For the purposes of this article, it‚Äôs pork from breeds developed before 1900.

It often comes as a surprise to consumers accustomed to supermarket meat that pork from old-time breeds isn‚Äôt uniform in appearance and flavor. Nicely marbled pink pork from Gloucestershire Old Spots tastes sweet and nutty; darker-hued Ossabaw Island pork has a robust, spicy flavor; and Berkshire pork has a subtly smoky, sweet taste. Before choosing a breed to raise for market, sample several cuts from the breeds that interest you. Contact breed associations to locate producers in your area who have USDA-inspected pork for sale. If you can‚Äôt find pork to sample locally, search for heritage-pork producers online. Many ship throughout the United States.

Also factor your location and facilities into the equation. White pigs sunburn and require additional shade in sunny, sizzling climates. Some states consider breeds like the critically endangered Ossabaw Island Hogs and Choctaw pigs feral swine and do not permit breeding and raising them in those states. Easygoing, flop-eared breeds, like Large Blacks and Gloucestershire Old Spots, are more easily handled and require less elaborate¬Ýfencing and handling facilities than ultra-active breeds, such as Tamworths and Durocs. Long-snouted breeds, such as Tamworths and Ossabaw Island Hogs, are more aggressive rooters, causing more damage to pastures than short-snouted breeds, like Poland Chinas and Yorkshire; however, it also means they‚Äôre often better foragers, especially in woodland areas.

Consider consumers‚Äô preferences. Some prefer the ultra-succulent, fatty flesh of old-style lard hogs, like Mulefoots, Guinea Hogs and Mangalitsas. Others choose leaner pork, such as that of Poland Chinas, Durocs and Tamworths. Chefs often pay premium prices for heritage pork from favorite breeds, so if you plan to market to restaurants and institutions, include them in your decision making.

Another important consideration is your approximation to a proper processing plant. If you intend to sell live porkers from your farm or pigs delivered to the buyer‚Äôs choice of processing plants, access to local, custom-processing facilities and state-inspected slaughterhouses is sufficient. If you plan to market finished cuts of meat, your pigs must be processed at a USDA-inspected slaughterhouse. Not all USDA slaughterhouses accept swine from small-scale producers, so make sure your local one does before you commit to producing pork.

Consumers who pay top dollar for heritage pork expect it to be raised in humane surroundings. This generally means grassy pastures, mud wallows and acorn scrounging in the woods‚Äînot closed confinement. These are all considerations to account for before you purchase stock.
Finally, seek out heritage-pork producers in your area and pick their brains. Find them online or ask your local cooperative extension agent or veterinarian who‚Äôs raising niche-market pork where you live.

The Breed You Need

Berkshire hogs originated in the Berkshire area of England some 200 years ago, where they were fattened on waste products from London‚Äôs dairies, breweries and distilleries. The American Berkshire Association, formed in 1875, was the first swine registry established in the world. The Berkshire is a medium to large hog that‚Äôs black with a white snout and boots and a splash of white on the tip of its tail. It‚Äôs a nicely proportioned pig with small, upright ears and a short, dished face. Berkshires are hardy, fast-maturing, good-natured pigs and famous for their nicely marbled, succulent and flavorful pink meat. It‚Äôs especially popular with Japanese chefs who call it kurobuta (black pig meat).

The Choctaw is a nearly extinct lard hog descending from swine brought to America by early Spanish explorers. Only about 100 remain, which means Choctaws aren‚Äôt readily available to pork producers at this time. The Livestock Conservancy hopes to restore breeding numbers to a stable level and make the breed available to producers within two to three years.

Swine breeders in New York and New Jersey developed big, red Duroc hogs during the early 1800s. The breed was widely exported throughout the world and is a major contributor to modern hog operations throughout North America due to its fast maturity and ultra-efficient conversion of feed to meat. While mainly known as a commercial hog, this hardy, old breed produces flavorful, lean but well-marbled meat.

A large, predominately white pig with a few black spots, the Gloucestershire Old Spots has huge lopped ears that droop over its face and a long, slightly arched back. It hails from Gloucestershire, England, where it was once known as the Orchard Pig and was raised on windfall apples. Old Spots are hardy, sweet-natured hogs and outstanding foragers. They produce sweet-tasting, well-marbled, exceptionally flavorful pork, including large hams. This breed is still being raised by the British royal family today.

The Guinea Hog is a compact, hairy, black or occasionally red pig with upright ears and a curly tail. It was a fixture on homesteads in the American Southeast for more than 200 years. A landrace breed selected over a long period of time for conditions in the South, its type and size vary greatly. Typical adults weigh 150 to 250 pounds and can have long or short snouts and erect or semi-lopped ears. As a lard breed, Guinea Hogs tend to pack on too much fat when raised in semi-confinement, but they‚Äôre hardy and peerless foragers, making them ideal heritage pastured-pork producers. Their pork is so delicious that it‚Äôs listed on Slow Food USA‚Äôs Ark of Taste, a catalog of more than 200 foods in danger of extinction.

Most people consider Kunekunes pets, but the breed is a first-class porker. Introduced to New Zealand in the early 1800s by whalers and traders, the Maori raised this diminutive pig for meat. Its name, in fact, means ‚Äúfat and round.‚Äù Kunekunes come in a range of colors and have short legs and semi-lopped or erect ears. Due to their short snouts, they tend to root less. Kunekunes are hardy, easygoing and excellent foragers. Their meat is nicely marbled, tasty and succulent.

Large Blacks were a fixture in the English counties of Devonshire and Cornwall by the early 1800s. This is a large, long-bodied black pig with gray skin, a medium-long snout and huge lopped ears that cover its face. Large Blacks are hardy pigs with even temperaments. They‚Äôre peerless foragers and famed as efficient converters of feed into exceptionally tasty, nicely marbled pork.

While the origin of Mulefoot hogs is uncertain, it was well-established in Ohio, Indiana, Illinois and the Ozark region when the National Mulefoot Hog Record Association formed in 1908. By 1910, there were 235 breeders registered in 22 states. Mulefoot hogs are medium-sized, black swine with distinctive fused hooves. Some have cylindrical, fleshy appendages called wattles dangling from their necks. Mulefoot hogs are lard pigs, so they fatten easily and produce such succulent, well-marbled, red pork that they‚Äôre listed on the Ark of Taste. They are hardy, docile and outstanding foragers.

Ossabaw Island Hogs descend from swine that Spanish explorers left on Ossabaw Island almost 400 years ago. No additional genetics have been added over the years, so they‚Äôre as feral-looking as a recognized breed can be. Adults tip the scale between 100 to 250 pounds, and they carry an unusual ‚Äúthrifty gene‚Äù that enables them to pack on weight when food is plentiful and live off stored fat when it isn‚Äôt. Ossabaw Island Hogs are hardy and adept foragers that are easy to bring to slaughter weight on a mainly pasture diet. Their red, spicy pork is a favorite of gourmet chefs, also earning them a place on the Ark of Taste.

Hog farmers in Ohio‚Äôs Butler and Warren Counties developed Poland Chinas in the 1880s. Like Berkshires, Poland Chinas are black with white snouts, boots and tips on their tails. They‚Äôre long, lean pigs with large jowls; short, upturned snouts; and semi-lopped ears that turn toward the eyes. They‚Äôre fast-maturing, hardy, rugged and docile, and their pork is nicely marbled but lean.

The Red Wattle‚Äôs origin is unclear, but this breed does trace its ancestry to several batches of large, red hogs with wattles that were captured from the wild in areas of East Texas. They‚Äôre large hogs, so they require more room to house than smaller heritage breeds. They are, however, fast-maturing, easygoing pigs and hardy, highly efficient foragers. Red Wattle pork is fine-textured, luscious and lean, earning this pig a spot on the Ark of Taste.

During the 1880s, Hoosier hog farmers crossed local landrace hogs with Poland China swine from Ohio, adding a few Gloucestershire Old Spots to the mix in the early 1900s, thus creating a black-and-white-spotted breed called the Spotted Poland China. In 1960, the National Spotted Swine Record dropped ‚ÄúPoland China‚Äù from the name. Spotted hogs are large, fast-maturing, easygoing pigs that produce lean, tasty pork on less feed than most other breeds.

The Tamworth hog descended from a type already well-established in the British Middle Ages, a time when there were yet to be established breeds. It‚Äôs named for the village of Tamworth in Staffordshire and came to Canada in 1877 and the U.S. in 1882. They‚Äôre medium to large, narrow-bodied red hogs with long legs and bodies, upright ears and a long, straight snout. They‚Äôre active, intelligent pigs that don‚Äôt take well to confinement but are excellent foragers and rooters that do exceptionally well outdoors. They yield firm-textured, nicely marbled, lean pork.

Today‚Äôs consumers prefer old-fashioned flavored pork from pigs raised in a healthy, humane manner. If you can provide it, the market is there. But do your homework before embarking on a heritage pork venture to make certain it‚Äôs right for you.

This article originally ran in the September/October 2013 issue of Hobby Farms.