2 Poisonous Spiders to Avoid on the Farm

This morning, Dad was dishing out goat feed when he picked up a pan, turned it over and there was a huge black widow spider underneath. 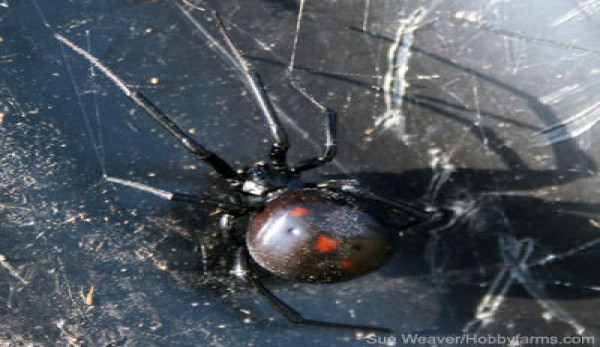 This morning, Dad was dishing out goat feed when he picked up a pan, turned it over and there was a huge black widow spider underneath. Last week, he grabbed a towel he left hanging on the bathroom door overnight and a brown recluse spider fell out. Now Mom and Dad are creeped out about poisonous spiders. Do you have poisonous spiders on your farm? If you do, here are things you should know.

According to the March 2007 issue of Georgia Epidemiology Report, there are roughly 3,000 different species ofÂ spiders in the United States, but most have fangs that are too short or too fragile to pierce human skin. Among the spiders that bite, only four are dangerous to humans and animals: the brown recluse, widow spiders, the hobo or aggressive house spider, and the yellow sac spider.

Black Widow Spiders
When most people think of poisonous spiders they think of black widows, though not all widow spiders are black. Red widows live in Florida, and brown widows in the Gulf Coast states ranging from Louisiana to Florida. Black widow range is far more widespread. Southern black widows, like the ones on our farm, are found from Florida to Pennsylvania and west to Texas and Oklahoma; youâ€™ll find Northern black widows in the northeastern United States and southwestern Canada; and Western black widows are native to the western half of the United States, southwestern Canada and most of Mexico. Black widows get around.

Female black widows are poisonous, but the much smaller male black widows are not. Female black widows, legs included, are about the size of a quarter. Theyâ€™re shiny black with a red, orange or yellow hourglass marking on their tummies; some have red or orange markings on their backs, as well. Theyâ€™re usually shy and retiring, but if you accidently start to crush one, sheâ€™ll bite. Sheâ€™ll also rush to protect her egg sac if you touch her web. Donâ€™t do it! Black widows build their sticky, super-strong. irregularÂ webs in low, out-of-the-way places, like dark corners in barns, houses and garages and in places like woodpiles, brush heaps and horse troughs and feeders with recessed bottoms. Black widow bites are serious but rarely fatal. Before anti-venom treatment became available, about 5 percent of people bitten by black widow spiders died. Nowadays, fewer than 1 percent of victims die from black widow bites. Bites produce nearly immediate pain, burning, swelling and redness at the site, leading to cramping pain and rigidity in the stomach, chest, shoulders and back; watery eyes; headache; dizziness; vomiting; and even partial paralysis, especially in the legs.

Brown Recluse Spiders
Brown recluse spiders are the same size as black widows but light tan to brown with a darker fiddle-shaped marking on the back of the head. Theyâ€™re found in the central states from Nebraska to southern Ohio and south to Texas and the Gulf Coast states. Brown recluses hide in dark, out-of-the-way places during the day and prowl for insect prey at night. Both males and females are poisonous and there is no anti-venom available for brown recluse bites. Only 90 percent of brown recluse spiders create real problems but the other 10 percent are serious indeed. If youâ€™re bitten by a brown recluse, you might not feel it when it happens, but after an hour or so, intense pain sets in. Within 12 to 24 hours a small, white blister develops at the site. In serious cases, the affected area swells and becomes hard, then surrounding tissue dies and sloughs away, leaving a deep, nasty ulcer in the skin.

Nurse a Spider Bite
If you suspect that you or one of your animals has been bitten by a black widow or brown recluse, keep calm, wash the bite with soap and water, apply an ice pack and elevate the bitten body part if possible, then seek medical attention without delay. Try to take the spider along for positive identification, even if itâ€™s squished.

Itâ€™s best to avoid poisonous spiders altogether. Never put your bare hands in places you cannot see. Get rid of indoor clutter in your barn, house and garage. Brown recluse spiders make their daytime lairs under beds and furniture, in seldom worn shoes and garments, in stored boxes of stuff, and under anything left lying on the floor or ground. Wear long pants, long sleeves and gloves when stacking firewood or lumber, restacking baled hay, cleaning feed or tack rooms, tidying attics and closets or otherwise working where spiders may be hiding. Be careful. Poisonous spiders bite!