These all-black chickens might be startling to look at, but if you want to keep them on your farm, you’ll have to pay a lot. 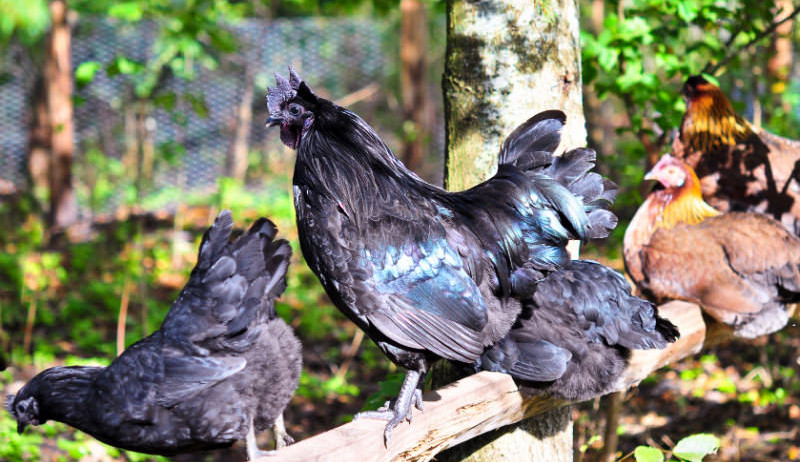 Fibromelanosis is a phrase causing big interest among chicken keepers—or a big-money interest, anyway. Those fuzzy-looking Black Silkie bantams are common to the U.S., but two other breeds exhibiting fibromelanostic traits—all black tissues, from feather to bone—are quite rare. The Ayam Cemani, hailing from Indonesia, and the Swedish Black Hen, from Scandinavia, look like they’re ready for Halloween.

Both breeds have been imported by rare-chicken breeder Greenfire Farms in Midway, Fla. Owner Paul Bradshaw, who has been working with rare breeds since 2007, is attracted to these chickens because of their “un-chicken-like, exotically beautiful and vaguely sinister appearance.” He continues: “In a world of beige Ford Fiestas, the Cemani are black Lamborghinis.”

They’re priced like Lamborghinis, too. As of October 2014, a pair of the Ayam Cemani sells for $1,999 and two Swedish Black Hens for $1,000 to $2,000. There are just a few breeders in the U.S. Greenfire Farms sells a few dozen a year and has about a dozen adult birds of each breed. Ewe Crazy Farms in Southern Georgia maintains six breeding Swedish Black Hens and might have 40 to 50 individuals on the farm at any time as replacement breeding stock and animals for sale.

Neither of these breeders have eaten the meat from these birds, but Ewe Crazy Farms owner Bryce Everett says, “I do have several friends who have tasted the meat and describe it as having a slightly gamier flavor compared to regular chicken. Most compare the taste to game birds, such as dove, quail or pheasant.”

Like many Asian chicken breeds, such as the Aseel and the Malay, the Ayam Cemani has a game fowl-like appearance. Its feathers are black with a metallic-green and -purple sheen, and the black coloration continues to the skin, muscles, bones and organs. The average weight is only 2¼ to 4 pounds.

Hens lay about 60 eggs per year. They go through a laying cycle of 20 to 30 large, cream-colored eggs, and then they stop laying for three to six months.

“The Swedish Blacks (or Svart Höna) actually were not originally in my line of sight during the first [rare-chicken] import,” says Everett, who has been working with rare poultry since 2012. “My main concern was importing various colorations of English Orpingtons, and my contact providing the Orpingtons happened to also raise Svart Höna. One step led to another, and I eventually imported both eggs and adult Svart Höna from England after seeing photos of the stock. I was really lucky to find a breeder who was willing to export stock despite these birds being extremely rare, even in Europe.”

Swedish Black Hens have the same fibromelanosis trait that makes their feathers, skin, muscles and bone black, though some individuals have a mulberry-red skin. The birds weigh only 5 to 7½ pounds, and hens lay 140 cream-colored eggs per year.

A price tag like the ones on these birds is scarier than an all-black chicken costume on Halloween.

“Like most pursuits, the more sophisticated and knowledgeable you become about your interest, the greater lengths you must go to in order to satisfy it,” Bradshaw says. His typical customer is a sophisticated chicken fancier who is drawn to the black chickens’ exotic look.

Everett only sells Swedish Black Hens that are high-quality representations of the breed to others who are interested in breeding the chickens.

“I’ve been amazed at the number of people who have stepped forward and offered assistance in preserving rare breeds by breeding and showing,” he says. “As more people get involved, the rare breeds have a chance to become established in the U.S., which helps move these birds off the ‘endangered’ breed list.”

A word of caution before spending a few thousand dollars on a starter flock: Breeders might claim to be selling a certain rare breed, but you should do your research and verify the integrity of the breeder. “The single most important piece of evidence to support their claims would be a valid USDA import permit showing the origin of their breeding stock,” Bradshaw says. “Buyers should always ask for a copy of this permit.”

Even if an all-black chicken isn’t the next animal you’ll be adding to your farm menagerie, learning about rare breeds, like the Ayam Cemani and the Swedish Black, can open to your eyes to a whole new (and colorful) world of livestock.