As temperatures cool down, consider these two warm meals that are easy to prepare and will give your chickens a treat. 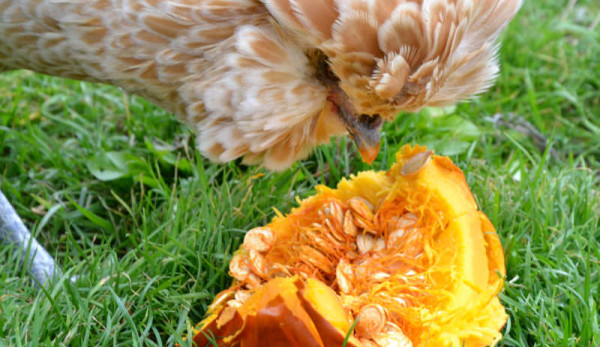 As winter gets closer, the days get shorter and we chicken keepers start heating the coop waterers. Our chickens are adapting to the changes in weather and temperature, and though theyâ€™re hardy animals, it doesnâ€™t mean theyâ€™re always comfortable in the cold. My Wyandotte hen, for example, always molts in November. This morning, sheâ€™s nearly naked and weâ€™re 2 degrees below freezing.

When the temperature suddenly turns cold, I like to ease the shock with compassionate, warm breakfasts. Here are two of my favorite meals to warm chickens from the inside out.

Every fall, I buy pie pumpkins with the intention of making pie for my family. The thing is, I donâ€™t like pumpkin pie, so I often donâ€™t get around to it. Two of my pie pumpkins are still outside looking fantastic, but one that I had on my kitchen table started getting blotchy and too ripe. I was faced with having to make pie.

Pumpkin, like other winter squashes, is high in vitamin A, vitamin C and beta-carotene. Itâ€™s just as healthy for chickens as it is for us (when we donâ€™t purĂ©e it into a custard full of sugar, that is).

Like usual, I avoided making pie and chose to feed my flock instead. To cook an overly ripe pumpkin, break off the stem, stabbed a few holes around the top, and bake at 350 degrees F for one hour. To contain the mess, I put the pumpkin in a 9-by-13 pan lined with aluminum foil. After an hour, turn the oven off and leave the pumpkin in the hot oven for 20 minutes or so, just to make sure itâ€™s nice and soft. After the pumpkin cools enough to touch, slice it into quarters, let it cool a little more, and then serve it to the chickens.

If you try baking a fresher pie pumpkin or other winter squash, like butternut or spaghetti squash, youâ€™ll find theyâ€™re very tough to cut into with a knife. In these cases, I grab a drill and make two holes in the top of the squash using a 1/2-inch drill bit. This not only saves my fingers, it letâ€™s steam escape the squash so it doesnâ€™t explode all over my oven.

Some people feed their jack-oâ€™-lantern pulp to their flocks when theyâ€™re carving pumpkins for Halloween, but I havenâ€™t had success with this. My picky flock will only eat pumpkin seeds if theyâ€™re cooked. If you find your flock is like mine, and you can get to your jack-oâ€™-lantern before it starts to decay, cut it up and steam the pumpkin flesh for your flock so it doesnâ€™t go to waste. Itâ€™s a great supplement, low in calories and makes a small dent in feed costs.

What I love about feeding warm oatmeal to my flock, especially on the coldest mornings, is that itâ€™s cheap, itâ€™s hydrating and I can mix in kitchen scraps to make it a little more exciting for the foragers.

I donâ€™t bother cooking the oatmeal because then I have to wait for it to cool. Instead, I put about 1 cup of old-fashioned oats into a glass bowl, then simply add hot water from the tap. I let the oats soak for a few minutes and sometimes add a little more water.

I always stick my finger into the oatmeal see if itâ€™s warm enough, and if not Iâ€™ll microwave it for 30 seconds, but not more without checking the temperature. I donâ€™t want to risk burning the chickens.

What are some of your flockâ€™s favorite meals when the weather gets cold? How do you pamper them when theyâ€™re molting during colder temperatures? Let me know in the comments below.