2 Ways to Split a Bee Colony

Expand your urban hive and give your bees some growing room with these two methods to split a bee colony. 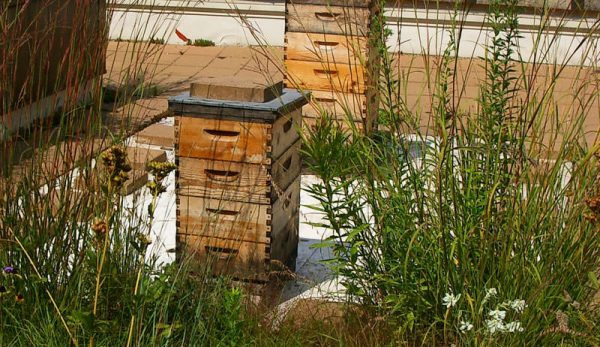 Ever wonder how your local bee supplier created the nucleus colony you bought your first beekeeping spring? Or how beekeepers expand their apiaries without buying bees year after year? Honeybeesâ€™ natural means of propagation is through swarming, but in our own beeyards, the easiest way to create more colonies is by what’s called making a split of an existing hive.

Splitting aÂ hive is a beekeeperâ€™s way of managing hive populations, controlling the colonyâ€™s swarm tendencies and creating new colonies, all in one action. Making a split creates two colonies from one, just as swarming does. Each spring, a colonyâ€™s population reaches maximum capacity and the beesâ€™ natural urge is to swarm, making space in the hive and sending out a new colony. By manipulating their environment through splitting, this urge is reduced and, to top it off, the beekeeper ends up with a new colony of bees. While splitting is a hands-on job, requiring some manipulation of the hives, the beekeeper and the bees are better for it if done correctly and on time.

Why split? For better or worse,Â urban beekeepers have a uniqueÂ responsibility to their neighbors, fellow beekeepers and city to do their best to keep their bees from swarming. While some rural beekeepers might allow their colonies to grow and swarm, splitting hives is one of the most important preventative measures a responsible urban apiarist can take.

With as many styles of beekeeping as there are beekeepers, there is no one way to “splitâ€ť a hive of bees. No two beekeepers do it the same, and no two splits create the same result. (Nothing is guaranteed in beekeeping!) Here are two of my favorite tried-and-true ways to go about it.

Method No. 1: The Literal Split

This simple way of splitting a bee colony requires minimal manipulation of frames but a lot of faith in the beesâ€™ ability to create a new queen. In essence, this method splits the mother hive in half. Because it doesnâ€™t require an inspection prior to the split, the existing queen might remain in the mother hive or end up in the new hive.

Follow-up inspections are critical to ensure both colonies grow strong and healthy and to make sure each hive has a mated queen. This method works well if you have a very large apiary or many hives to split or are short on time. It allows the bees to make their own queen and the queen to mate with drones in the area.

Note: This method significantly reduces the population in the mother hive. Only conduct the literal split method on very healthy and strong mother hives. While easy, this is not the ideal type of split if you plan toÂ

Step 2: Put your empty woodenware in its permanent location in the apiary. Have the bottom board exposed and ready for a super to be placed upon.

Step 4: Add an empty super to each hive, placed above the brood nest. (This gives the bees room to grow.) Replace the inner and outer cover on both hives. Return in one week to inspect both hives. Look for queen cells in one of the hives and for the old mated queen and a continued good brood pattern in the other.

Method No. 2: The Calculated Split

This method is a bit more complicated and requires some planning. It differs from the literal split in that only a few frames are removed from the mother hive, leaving it still quite large and strong. If the new hive fails to thrive, it is fairly easy to try again. Most beekeepers like to purchase mated queens for this type of split, giving the new hive a leg up on the season.

Step 2: Purchase a mated queen from a reputable breeder. Time your split with the arrival of the queen.

Step 3: Put the empty woodenware in its permanent place in the apiary. Have the -bottom board and a new super or brood box ready and in place, with the center five frames removed.

Step 4: Smoke the mother hive as you would for an inspection. Remove the outer and inner covers of the mother hive. Find three good frames of brood. Make sure the queen is not on any of these frames; youâ€™ll want to leave her with the mother hive. The pattern of brood should be healthy and look like a bullâ€™s-eye on the frame with honey on the outside. Put these three frames of brood in the center of the new hiveâ€™s box.

Step 5: Find two frames of honey and pollen from the mother hive. Place them on either side of the three frames of brood in the new hive. Remember to replace all removed frames in the mother hive with new frames.

Step 6: Take one frame of brood from the mother hive; inspect it to make sure the queen isnâ€™t on the frame. Then, shake the bees from the frame into the new hive to increase its initial population. Return this frame of brood back to the -mother hive.

Step 7: Install your mated queen into the new hive: Using two nails to suspend the cage, hang it between the two center frames of brood, candy–end up. Puncture a hole in the candy plug so she can chew her way out slowly, giving the bees time to adjust to her pheromones.

Step 8: Close up both hives, and return to the new hive in two to four days, weather permitting, to ensure the queen has been released from her cage and is actively laying. If you donâ€™t see eggs, donâ€™t panic! Be patient, and return to inspect again a few days later; some queens need time to get settled.

Step 9: Inspect the mother hive regularly to ensure that the colony -re-mains healthy and the population is still strong. You may split again from the mother hive as long as it is early in the season and the hive has an abundant population.

Creating a split is a creative way to manage hive populations and prevent -unwanted swarms, but it has the additional benefit of expanding your apiary for only the cost of the woodenware and a new queen. If your apiary is already at capacity, consider bringing in a little extra income by selling the new hives you create to other beekeepers.

Not all colonies survive the winter and those that do tend to be stronger and healthier. By creating splits and sharing your beesâ€™ genetics with other beekeepersâ€™ hives, those healthy bees and strong genes increase our honeybee populations, benefiting the bees and the beekeepers.