Looking for a new chicken breed to try out in the coop this year? We rounded up 20 of the best breeds to add to your flock in 2021! 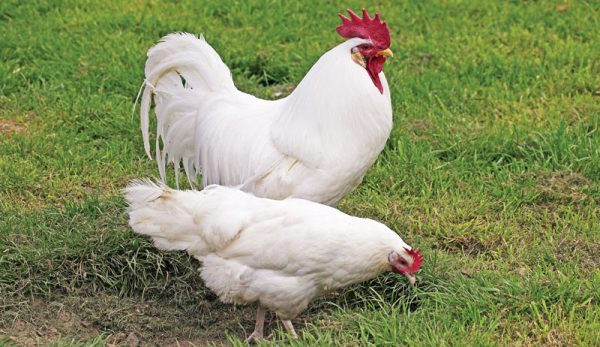 To celebrate Hobby Farms‚Äô 20th anniversary, we‚Äôve picked 20 of the best chicken breeds in 20 different categories to fulfill your every small-farm need. From the best layers to the best meat breeds, from the most docile to the most ornamental, plenty of different birds exist from which to choose. ¬Ý

This hybrid was developed in California by breeding White Leghorn hens to California Grey roosters. They are mostly white with a few black specks.¬Ý

Spritely and active, Leghorns lay 250 to 300 or more medium-to-large white eggs per year. Originating in Northern Italy in ancient times, they‚Äôve been a favorite American layer since they arrived on our shores in 1852.

Leghorns are ultrafertile, vigorous, hardy and heat-tolerant. While they tolerate confinement very well, they‚Äôre noisy, flighty and strong fliers, so they don‚Äôt do well in urban situations.

Roosters weigh about 8 pounds; hens, 6. Pullets begin laying at about 22 weeks of age and lay roughly 300 brown eggs per year.

Most Red Stars are active but docile. Some strains tend to be flighty.¬Ý

Read more: The Australorp chicken breed, derived from Orpingtons, are a favorite for many keepers.

Easter Eggers aren‚Äôt an American Poultry Association-recognized breed of chicken. They descended from Araucanas and Ameraucanas and come in an array of colors, comb types, and with or without muffs, beards and ear tufts.¬Ý

The Easter Egger‚Äôs claim to fame is its sweet, docile nature and the fact that it lays blue-, green-or olive-colored eggs. This medium-sized, healthy, quiet, heat- and cold-hardy, friendly breed tolerates confinement well, making it an ideal urban chicken.

Hens seldom become broody, and they lay in the neighborhood of 200 to 250 eggs per year. ¬Ý

Hens weigh about 6 1/2 pounds; roosters, 8 1‚ÅÑ2, so they make fine meat chickens, too. A bantam version exists as well.¬Ý

New Hampshire hens lay about 200 light-to-medium brown eggs per year, especially during the coldest winter months when other breeds tend to stop laying. These calm, friendly birds do well in confinement, too.

William Cook, a coachman living near the town of Orpington in Kent, England, developed this breed in the late 1800s by crossing Minorca roosters with Black Plymouth Rock hens, then breeding their offspring to the Langshan chicken. His goal: Create a large, plump, fast-growing, winter-hardy meat bird with fine eating qualities.

The APA recognizes Black, Blue, Buff and White in large-fowl and bantam versions.¬Ý

Read more: Learn more about the Orpington breed of chicken!

Incredibly fast growing, they can weigh 6 pounds at 6 to 8 weeks of age, or they can be grown out to 8- to 10-pound broiler size. Due to their heavy weight and rapid growth, stress-broken legs, heatstroke and heart failure are fairly common.

Cornish Xs aren‚Äôt very active and are docile in nature, making them easy to house and handle.¬Ý

Read more: Want to raise meat birds? Here’s what you should know about keeping broilers.

Known as Serai Taook in their native Turkey, Sultans have more unique characteristics than any other breed of chicken, including a V-shaped comb, crest, beard, large nostrils, low-carried wings and erect bearing, feathered legs and toes, and five toes on each foot.¬Ý

Sultans are white with blue shanks and toes. Roosters weigh 6 pounds; hens, 4. They are active but friendly. Hens lay 150 to 200 small, white eggs per year.¬Ý

Brought to America in 1867, the APA included Sultans in the organization‚Äôs first Standard of Excellence (an annual publication describing recognized breeds) in 1874. The Livestock Conservancy, an American farm organization with a mission ‚Äúto protect endangered livestock and poultry breeds from extinction,‚Äùclassifies the Sultan chicken breed status as ‚ÄúCritical,‚Äù meaning there are fewer than 500 breeding birds in the U.S., with five or fewer primary breeding flocks (50 birds or more), and an estimated global population of less than 1,000.

The Plymouth Rock is an all-American, dual-purpose chicken developed in New England during the 1800s. Its exceptionally calm and friendly demeanor, hardiness, and fine laying and table qualities make it a great bird for first-time chicken-keepers.¬Ý

Hens lay about 200 large, light-to-medium brown eggs per year, and they tend to be fine broodies. They make excellent foragers that adapt well to confinement.

Developed in Pakistan and India as fighting chickens, the Aseel is now celebrated for its unique appearance and friendly demeanor toward humans. America‚Äôs first Aseels came from India in the late 1800s.¬Ý

Their muscular bodies are held in a distinct, upright manner. Aseels have broad skulls, menacing eyes and strong, curved beaks. Hens are poor layers of small, brown eggs but are superlative broodies that fiercely guard their chicks.

Aseels tend to fight with other chickens but are docile and friendly toward people. Roosters weigh about 6 pounds; hens, 5.¬Ý

An old Chinese breed that came to America in the 1800s, the Cochin chicken is so broody that even roosters occasionally set eggs, including the eggs of ducks, turkeys and geese.

They are huge‚Äîroosters weigh 10 to 12 pounds and hens weigh as much as 9‚Äîand they‚Äôre profusely feathered with fluffy plumage, including their legs. Smaller bantam versions are available, too.

Hens lay up to 140 medium-to-large tinted eggs per year. Cochins are slow growers but make a lot of meat; they‚Äôre best harvested at 15 to 16 months of age as 12-pound capons. They‚Äôre nonflyers and one of the quietest, gentlest breeds, making them excellent pets as well.

Read more: Need a reason to keep Cochins? Here are 6!

Originating in Belgium in the late 1800s, the Belgian Bearded D‚ÄôUccle (pronounced dew-clay) has a beard and muffs that extends around its head as well as feathered legs, giving it an owl-like appearance. The APA recognizes Black, Golden Neck, Mille Fleur, Mottled, Porcelain, Self Blue and White colors.

They are true bantams. Roosters weigh about 26 ounces; hens, 22.¬Ý

Hens are moderate layers, producing about 150 tiny, white or tinted eggs per year. But they‚Äôre peerless broodies and sometimes used to hatch quail and pheasant eggs.

One of several Mediterranean dual-purpose breeds that produce well in hot, humid climates, this chicken originated in Spain, and the APA recognized the breed in 1949.

Catalanas come in one color: buff with a black tail.¬Ý

Roosters weigh about 8 pounds; hens, 6. Catalanas mature early. The Livestock Conservancy states that ‚Äúthe cockerels and cull layers are noted for having very good carcasses and succulent meat … Cockerels are also used in the production of quality capon in Spain.‚Äù

Hens lay about 200 medium-size, white or tinted eggs per year and seldom become broody. Active and somewhat flighty, they forage well but don‚Äôt adapt the best to close confinement.

If you‚Äôd like to add a rooster to your flock but don‚Äôt want one that will chase you around the yard, try a Faverolle. These cute, fluffy chickens have beards, muffs, feathered legs and five toes on each foot.

Developed near the French village of Faverolle, they came to America in the early 1900s. Hens lay 180 to 200 medium-to-large tinted-to-light-brown eggs per year. Roosters weigh 8 to 10 pounds and hens, 7 1/2 to 9 pounds, so this chicken makes a meaty, dual-purpose breed.¬Ý

The Livestock Conservancy states that Hollands are the rarest living breed of American chicken. That, along with their stellar dispositions and fine laying and meat qualities, makes them the perfect bird for anyone who‚Äôd like to help preserve critically endangered poultry.¬Ý

Developed during the 1930s in New York, Hollands originally came in Barred and White, but the White variety appears to be extinct. Hens lay 200 to 250 large white eggs per year. Roosters weigh around 8 1‚ÅÑ2 pounds; hens, 6 1‚ÅÑ2. Bantams are available, too.¬Ý

Hollands are calm, friendly and cold-hardy, and hens make good brooders. They free-range with ease and forage most of their own feed during the summer. But they do well in confinement, too.¬Ý

Developed in Massachusetts and Rhode Island in the late 1800s, this chicken might be America‚Äôs best-known breed. Early breeders wanted a bird that could lay 200 to 300 large, medium-to-dark-brown eggs each year through the cold winter. They also dress out nicely as a table bird.¬Ý

Breeding RIR roosters to Rhode Island White hens produced the Cinnamon Queen hybrid. Hens lay at an earlier age than most other hen, producing 250 to 300 extra-large brown eggs per year.

When you think pet chickens, think cute, compact, friendly bantam Silkies. This ancient breed, developed in the Far East (most likely China), comes in an array of colors in bearded and beardless varieties. All have fluffy, furlike plumage, compact walnut combs, turquoise earlobes, black skin and bones, feathered legs, and five toes on each foot.

Monks at the Cistercian Abbey in Oka, Quebec, Canada, developed the White Chantecler in the early 1900s, selecting for good temperament, vigor and the ability to produce well during harsh Canadian winters.

Later, in the 1930s, an Alberta poultry breeder developed a partridge-colored version.¬Ý

Chanteclers are extremely cold hardy, and hens lay about 200 large brown eggs, even in the height of winter. Calm and friendly, they love to forage and do well in confinement.

Chanteclers are meaty, with large breasts. Roosters weigh about 8 1/2 pounds; hens, 6 1/2. Bantam versions are available, as well. In 1999, Quebec officially recognized the Chantecler as a native Quebec breed.

There are more than 400 breeds and varieties of poultry recognized by the APA and the American Bantam Association, be it large and small bantam chickens, ducks, geese, turkeys and guinea fowl.

No matter what you‚Äôre looking for in a chicken, there‚Äôs something exactly right for you. These are just a few of the best!¬Ý

This article originally appeared in the March/April 2021 issue of¬ÝHobby Farms¬Ýmagazine.