Baling hay is a complicated job. These 20 machines, tools and items for baling hay can help you get the job done smoothly, safely, easily and efficiently. 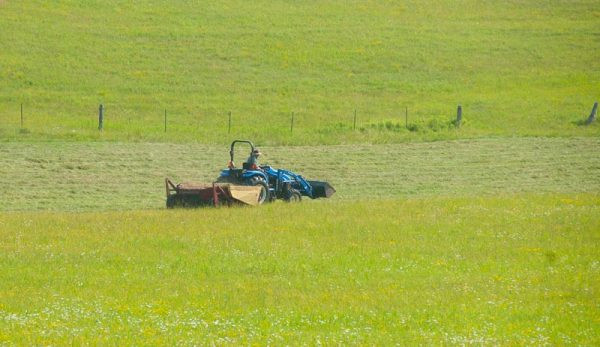 Baling hay is a complicated job with many steps and components. These 20 machines, tools and items for baling hay can help you get the job done smoothly, safely, easily and efficiently:

The heart of any major farming operation. Youâ€™ll need around 40 horsepower (more is even better) to handle baling hay.

Combining a sickle bar mower or disc mower with a conditioner to promote better drying, modern mower/conditioners are the perfect tool for cutting hay. It sure beats a handheld scythe!

A machine used to aerate cut hay and speed up the drying processâ€”an important step if youâ€™re trying to bale before rainfall arrives.

Hay must be raked into windrows to facilitate easy baling. A hay rakeâ€”even an old oneâ€”can do the job just fine.

Whether youâ€™re making square bales or round bales, a hay baler is necessary to pack the hay into manageable units for easy handling and storage. Try moving loose hay around, and youâ€™ll quickly see the benefits of bales!

At least one hay wagon or trailer is convenient for hauling bales off the fields. Having multiple on hand allows you to unload one wagon while the other is picking up new bales.

While itâ€™s possible to get by without a bale kicker/thrower, if youâ€™re working with a small crew, having a machine that automatically shoots fresh bales from the baler into an attached wagon can save time and effort.

As an alternative to towing a wagon behind the baler, you can pull a hay accumulator, which will gather and hold a large handful of bales before dropping them off in a single location.

Later, you can drive to each group of bales and pick them up with a wagon, saving time compared to picking up individual bales scattered all over the fields.

In youâ€™re baling round bales, a hay bale spearâ€”literally a few heavy-duty prongs designed to pierce and pick up heavy balesâ€”is a great tool to have.

Trade out the bucket on your front-end loader (or mount the bale spear on your three-point hitch) to make transporting round bales a breeze.

Without baling twine, a hay baler isnâ€™t much use. Calculate your needs for the season, then stock up sufficiently so you wonâ€™t run out.

Read more: Not sure how much baling twine to buy? Here’s how to calculate your needs!

Does your tractor run on gasoline or diesel fuel? Either way, have enough on hand so you wonâ€™t run out in the middle of baling.

Sometimes machines break. Spare tires, rake tines, shears pins, etc. should all be handy so if something goes wrong, you can quickly switch out the broken part and keep moving.

A hay moisture and temperature tester will confirm that the hay youâ€™re producing is dry enough for safe baling.

You need somewhere dry to store your hay, yes? Any barn or shed can do the job, so long as it protects hay from the elements while still providing proper ventilation.

Storing the hay on floor pallets can help get air under the stack.

If youâ€™re storing hay in the upper level of a barn (or even just stacking it really high), a hay elevator can easily lift the hay where it needs to go, saving time and effort. They can also act as a conveyor belt to carry hay across wide spaces, such as from the front of a barn to the back.

The saying â€śmake hay while the sun shinesâ€ť often means hay is baled during hot weather. Staying hydrated is important, so have lots of drinking water on hand for you and your crew.

Light-colored clothes made of cotton are ideal for working in hot weather. And a long-sleeved shirt can help protect you from getting scratched up by prickly hay.

No, this isnâ€™t a requirement â€¦ but isnâ€™t the thought of riding around in an enclosed cab (especially one with air conditioning) an appealing thought on a hot afternoon?

May all your hay baling days be sunny and dry!