Life with chickens is far from dull—in fact, it can be downright hilarious. Find out how by reading these real-life funny chicken stories. 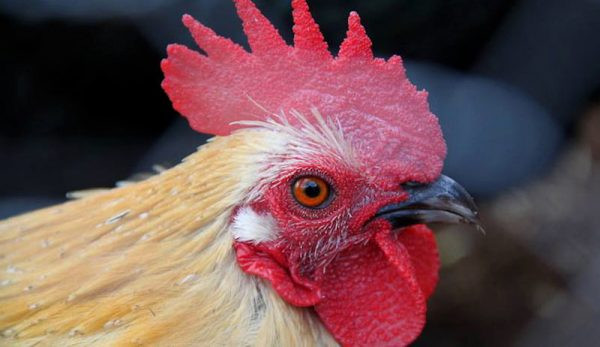 A good farm animal story is never lost on us, and when chickens are involved, there’s sure to be laughs. We asked the readers of Chickens magazine to share their funny chicken stories, and of course the replies that we got didn’t disappoint. Our conclusion after reading your funny chicken tales from the coop: Chickens definitely know how to keep it weird. 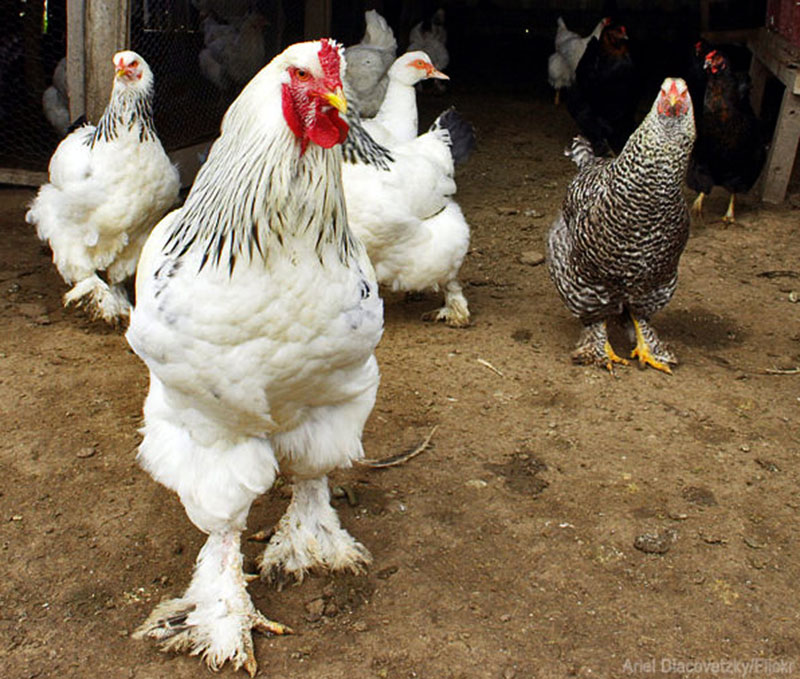 We somehow had a chicken egg end up in the duck nest. When they all hatched, the chicken really thought it was a duck. The mama duck would march her little ducklings out to the pond, all her babies in tow. Last in line was that awkward little chick. While all the baby ducklings were learning how to swim, the chick would stay on the bank pecking at bugs around the water’s edge. —Amanda Allen

We left the bedroom window open when we went to church and came home to an egg in the middle of our bed! —Raeann Dodge

3. Give This Roo Some Love 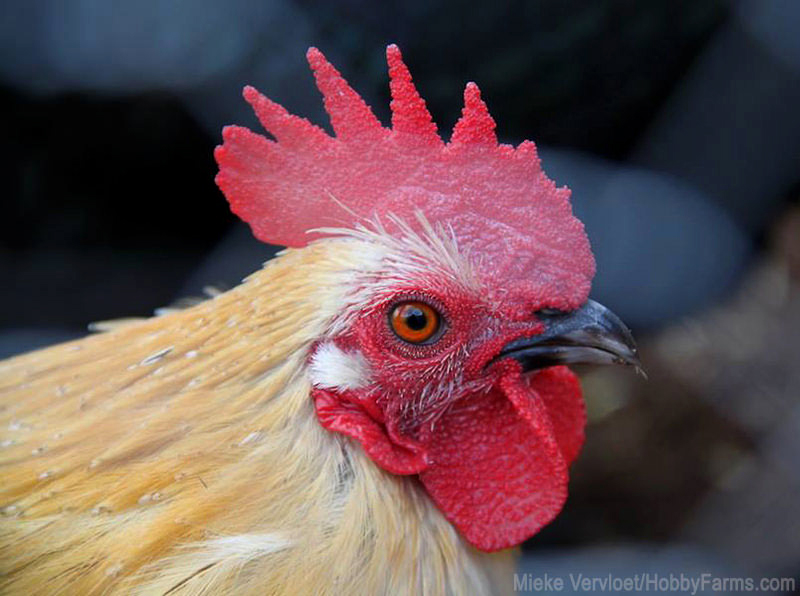 My booted bantam rooster, Chepi, is a cuddly, sweet man, but whenever he doesn’t get his morning cuddles, he’s upset at me later that day. He was once so upset he bit me. I always have to make up for the “forgotten” cuddles. He can be so moody when not being pampered! —Mieke Vervloet

My rooster ran away from home and is now living next door. —Kelly Barriga Chavez 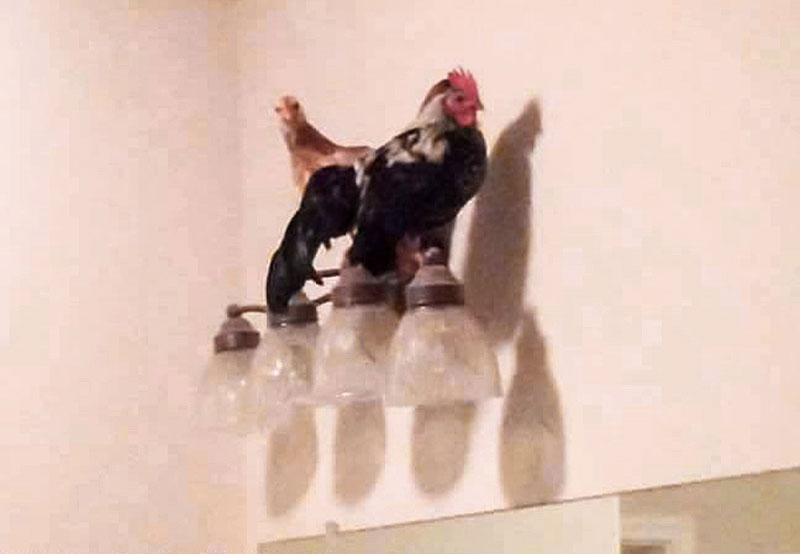 We have house chickens. One night we stayed out a little late and the chickens weren’t tucked into bed. Three of our girls were sitting on the bed waiting for us, but we couldn’t find Peeps and Nugget anywhere. We were starting to panic until I noticed them sitting on the light fixture of the bathroom. —Kelly Pattison Schumann

We have a Silkie that continually steals eggs from the laying hens. She doesn’t lay her own, but will sneak around whenever one of the ladies lays outside and pushes them with her beak into a nest. She has raised 12 at a time, and the chicks quickly outgrow her. —Faerie Springs Farm 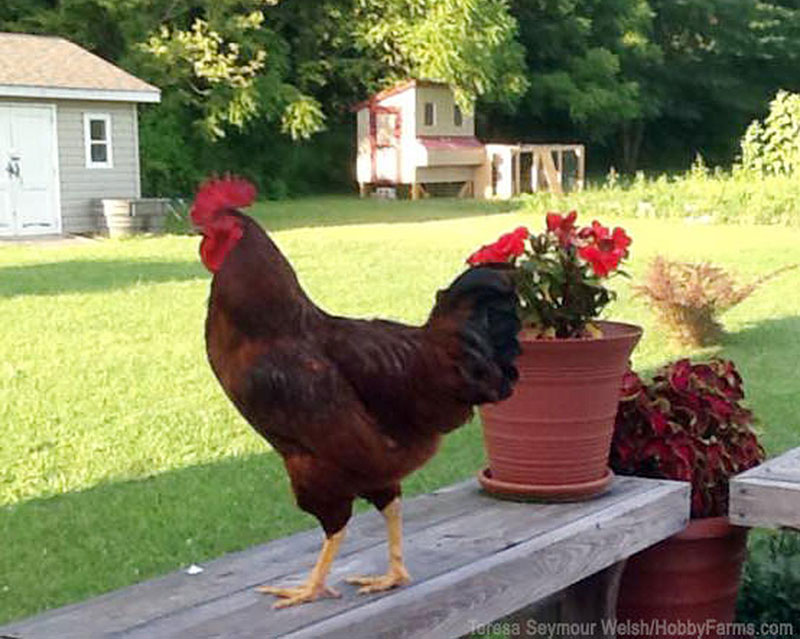 My rooster, Puff Daddy, gets up on the deck, and one day he was watching me through the window while I was doing dishes and flew right into the window to try to get me to play. He had such a shocked look on his face, but he never got hurt. —Teresa Seymour Welsh

8. Night of the Living Rooster

Last week, I got a new young rooster. Before daylight my wife was letting our dogs out for a potty break. The rooster “tried” to crow, and it scared my wife and both dogs. She said it sounded like a zombie screaming! —Joe Parker

I had a Silkie who had lost a lot of feathers because of a rooster, so I brought her in, bathed her and let her live in the house for about a month. She followed me around the house throughout the day. When in my room, I’d let her sit on the arm of my chair, but if I went to the bathroom or to take a shower, she’d jump on my bed and go to sleep on my pillows as if it were her bed. When it was time to lay her egg we would normally be in the living room and she would constantly try to go sit in someone’s lap. My kids would always push her away because of the gross factor, but I always thought it was really sweet. If she couldn’t sit in their lap, she’d get up behind them on the couch and drop one right behind their heads. —Lesli Hilton Smith

I used to have a Rhode Island Red; she was very intelligent. I let her come and go in the house. She would come sit by me on the end of the couch, but when she had to go to the bathroom, she would walk outside and go, then come back in the house. —Marie Main-Jeselink

We had no other place to put our brooder but in the bathroom off of the boot room. One day, when I was cleaning the chicks’ water dish, I forgot to close the door to the crate. By the time I had cleaned and refilled the dish in the kitchen, I made my way back to the bathroom to discover 13 baby chickens loose in my house. —Katrina Wilson

One day, I was bringing our chicks into the backyard to be in the bigger coop, so I decided to grab a box from the recycling bin to transport them. My dad started laughing at the box I used: It was a fried chicken box. I felt so bad because I placed the chicks in “their cousins’ grave.” —Ayla Reyes

My mother had a bantam hen that would come up on the back porch, jump up on the chest freezer to be close to my mother, and would lay her eggs standing up on the freezer. —Ronny Williams

I was running late for work one morning but had one last chore to do in the chicken coop. When I finished, I raced to the car and headed to the office, never thinking to double-check my hair. I get halfway to work and feel a dark stream of something on the back of my head. It was chicken poop, and I realized a hen had dumped on me in the coop. Blonde hair and chicken poop don’t mix! —Terry Katz

Speckledy, our Black Leghorn bantam, was a real character. She was the first of our flock to hatch and the first to roost and lay. I used to feed her bread and tidbits out on the back doorstep. One day, I forgot to feed her, so she got on the window ledge outside, looking through the window and loudly protesting that I hadn’t fed her. I laughingly went and got her bread, and when I opened the window, she promptly got on my shoulder and ate the bread off me. —Suzanne Kelsall

My little red hen’s name was Penny. Each morning, she came to the porch and hopped up on an orange canvas chair to lay her daily egg. During her daily offering, something scared her, and she ran through the open back door into the kitchen … laying her egg on the run … the egg rolling across the floor in the midst of flapping wings. —Rebecca Dillinger

We hatched several eggs, but sadly only one chick survived. She was put in a cage and placed in the pen with the older chickens. This baby chick got spoiled by my three grandkids that would take her out of the cage, tote her around and put her on their shoulders, where she would ride while they played. One day, I was getting the feed to put in the pen when I heard one of my little granddaughters calling out, “Mamaw! Come quick! Mamaw, HURRY!” I thought something was really wrong, so I rushed around the corner to discover my granddaughter bending over. After breathlessly asking what was wrong, her reply was, “Baby Chick jumped onto my back, and if I straighten up, she is going to fall off!” —Marlene Dark

We had two hen’s that “shared” hatching a clutch of about 25 eggs. Initially they fought about who was going to set, pushing and pecking each other off the nest. I guess they finally came to some arrangement. They ended up with 16 chicks, and although there were plenty of disagreements between the mamas, they were the best parents to those babies! —Kelly Ogilvie Sheridan

My two Queensland Heeler puppies love to sneakily move the chickens around the yard (until I catch them and tell them to quit). One day, I see one of the dogs trotting across the yard and then there was a hen … chasing the dog! —Teresa Riesenhuber

One of my duck eggs ended up in the chicken nest. When they all hatched and got old enough to walk around the farm, the duck jumps into the pond and starts swimming, and the mama hen went crazy crying for her baby. One of the funniest days ever! —Gonzalez Farm Chickens