Don’t underestimate the healing benefits of this kitchen staple. 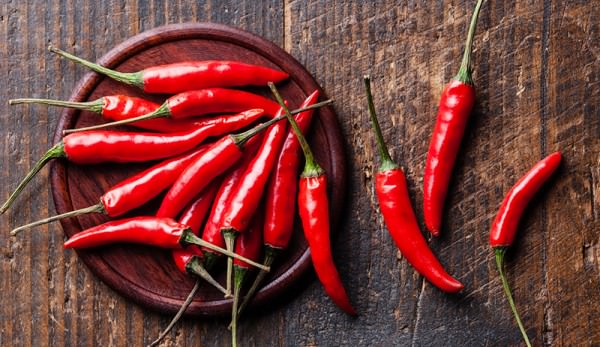 This is the year of the cayenne, according to the International Herb Association. Each year, we make a spot in the garden for his herb selection, and this year is no exception. In our front garden, we have two and a half rows of cayenne peppers that we’ll use for infusing oils to make our salve for sore muscles and joints, making fire cider, and drying and powdering for our personal kitchen.

Cayenne (Capsicum anuum) seems like a plant that we all know pretty well, but just like anything that becomes common to us, we often take some of the more interesting aspects for granted.

The name “cayenne” is actually a rather nebulous term. To me, it suggests an elongated, red-when-ripe hot pepper. The plant busts my teachings about Latin names a bit, as Capsicum anuum doesn’t only apply to what I recognize as a cayenne. It also applies to plants we call paprika, chili pepper, chiltepin, Christmas pepper, jalapeño and even bell pepper. We’re looking at a low-growing green shrub with white flowers. Cayenne flowers tend to arise singly rather than in multiples, as with some of its relatives, and they’re completely white, lacking the purple throat found in others. Here in the Midwest, cayenne is an annual, so we plant it every year and harvest all we can for winter before doing it all over again.

Cayenne originated in Mesoamerica, where the plant spread from place to place in the stomach of birds. The fruit—what we call the pepper—is actually a berry and was swallowed whole in most cases. Birds don’t register the heat that we do when eating peppers, so they have long been a favorite. I can honestly say that I have never seen a bird hopping through my pepper rows, as I never felt they were a predator I needed to manage, but now I’ll be on the lookout.

The plants in this family like a fair amount of nitrogen to get started—just the thing that comes ready made when you are ejected from the digestive tract of a bird! Next, they really like a bit of calcium fertilizer as the plant develops. We use comfrey tea and compost preparations as an application for all our Solanaceae family members. Just before the plant flowers, it likes a side dressing of something high in potassium—we’ll be using dandelion. The plants appreciate a well drained soil and full sun.

Birds may have once been important in the distribution of the cayenne pepper, but once the plant was discovered by explorers, such as Christopher Columbus, the seeds would begin to travel in the hands of humans. Today, there are well over 3,000 different varieties of Capsicum thanks to the ease of cross-pollination and the competitiveness of the human nature.

Cayenne comes in at 30,000 to 50,000 scoville units, pretty middle of the road considering that the hottest pepper right now is the ghost pepper at 1,000,000 scoville units. It seems that every year there is something hotter as humans pound their chests and try to outdo the next person on who can create a hotter pepper … and then who can eat it!

If you are planting cayenne in your garden, you can benefit from it in a number of ways. Topically, the capsaicin is beneficial in reducing the inflammation and pain of arthritis. You can also use the same preparation, often an infused oil, to soothe sore muscles. Internally, this plant is a digestive stimulant and a cardiovascular tonic. I use the powder in the kitchen to stop the bleeding when someone gets overzealous with a knife. You can even make a spray to ward off some of the common pests that attack houseplants.

We’ll be making quite a few of our typical farm products with the bounty of peppers harvested from our plants. We’ll also be enjoying the warm spice in quite a few meals. The one thing I won’t be up to this summer is crossing my plants, looking for something to melt my face!