3 Beneficial Spiders and How to Befriend Them On Your Farm

Spiders can be a huge help around the farm, so don't squish one until you learn about the role it plays. 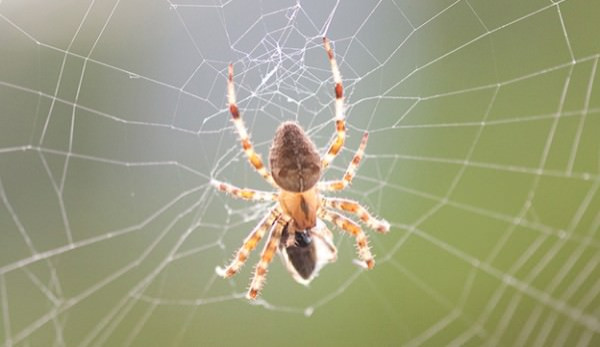 Vilified by the silver screen and perpetuated as a creature of mischief as many a Halloween witch’s sidekick, the spider deserves more credit than it often gets. Yes, they’re creepy with all those legs, scary-looking fangs and their ability to sneak up on you. And, yes, walking into a spiderweb or finding a spider where you least expect it is no picnic.

But let’s focus on the roles spiders play around the farm.

There are 38,000 species of spiders, according to the Colorado State University Extension. Despite overblown fears, CSU reports that only four species of spiders found in the U.S. are poisonous: black widow, brown recluse, hobo and yellow sac spiders.

Spiders provide free biological pest control. Theyāre present year-round and overwinter in the outdoors, so they’re ready to eat insects the moment their tasty favorites arrive in the spring. Devin Carroll of BioAg Services, an integrated pest-management control company in Fresno, Calif., says some spiders do good work in controlling pest insects, but they can eat beneficial bugs, too: “The roles may change depending on what plants are in the garden and which pests are important.ā

Some spidersāmore than 200 species in the family Gnaphosidaeālive in the soil, rather than spinning webs. These spiders help aerate soil, incorporate residues and improve water infiltration, according to the United Nations Food and Agriculture Organization.

There are plenty of places for a spider to take up residence on the farm, and you can help welcome them with your normal farm and garden activities.

“The spiders are not ‘attracted’ [to a place]. They just wander around until they find what they want,ā Carroll says. Different spiders are looking for different things. “Sac spiders need hiding places for daytime. Orb weavers need structures for building webs. All spiders need food. The garden needs lots of prey, including pests and non-pest arthropods. Otherwise the spiders will leave or starve. For this purpose, some of the most important prey are very small, suitable for baby spiders.ā

The CSU Extension points out a few garden tasks that will help keep spiders around:

You might recognize some of these spiders crawling or weaving around on your own farm. Hereās a look at what keeps these ladies and gents busy, and why theyāre good to have on board. 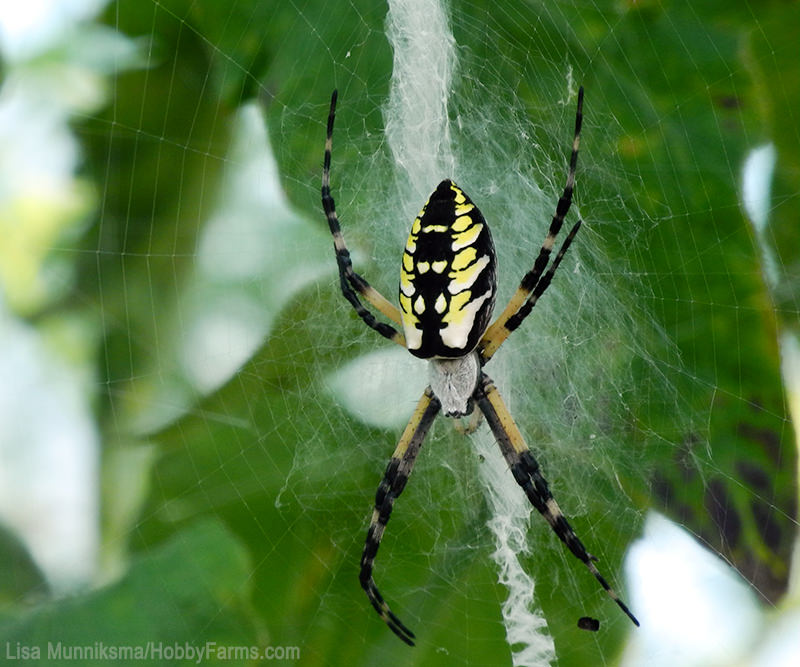 Orb weavers are a beneficial spider to have around the farm, as they eat flies, beetles, moths, mosquitoes and wasps, as well as other flying insects.

“They have large, beautiful webs, and people will notice them,ā Carroll says of the complex, easily distinguishable, zigzag-patterned webs that can be up to 2 feet in diameter.

Orb weavers come in a variety of sizes and colors, though in general, they have a fairly large abdomen. Females, at 3/4 to 1? inches, tend to be larger than males, which can be between 1/4 and 3/8 inch. 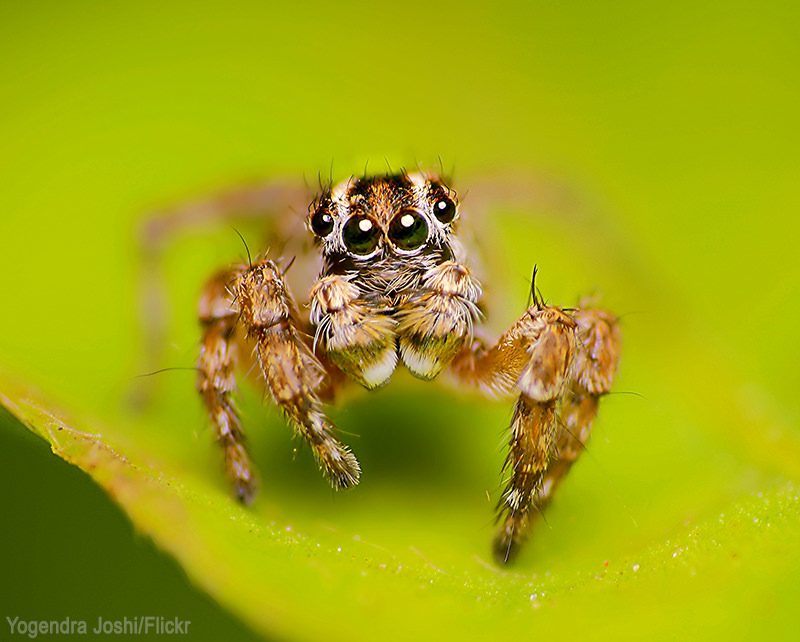 Itās no surprise, jumping spiders are called such because they jump (and can make you jump). The world’s 4,000 species of jumping spiders have eight eyes, so they see well and will react to people nearby. “They are considered to be the most intelligent arthropods,ā Carroll says.

There is a range of large, colorful jumping spider species, and they’re small: 1/10 to 3/5 inch.

“Their diet varies,ā Carroll says. “Most eat other spiders, and they also may eat other natural enemies. They tend to be high on the food ladder. Some eat beetles, which might be pests. Some eat ants.ā

Watch out, because these spiders can biteāCarroll calls out the Phidippus species in particularāand might be the most common biting spider in the U.S., according to Michigan State University. A bite from a jumping spider will cause a red patch on your skin but not much else. 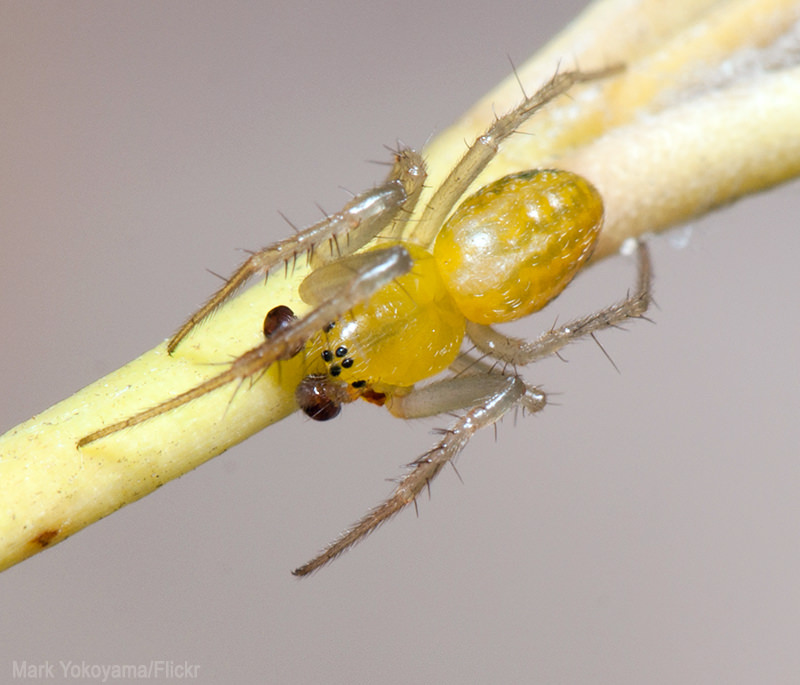 “In grapes and many other crops, these are the most important spiders in pest control,ā Carroll notes. They are active at night and donāt build webs. “They just wander until they bump into prey. This is a surprisingly efficient way to catch pests, including caterpillars and leafhoppers.ā

Sac spiders, only 1/10 to 3/10 inch in size, find their way into homes and also bite. They’re often mistaken for brown recluse but arenāt as aggressive. “Many bites occur when people put on clothes,ā Carroll says. “The bites arenāt serious, just red patches, sometimes with little blisters.ā However, he notes that bites from the Trachelas species can become infected.

The next time you encounter a spider on your farm or in your garden, don’t say, “Eeek!ā Say, “Hello!ā Realize it’s probably not going to hurt you, and appreciate it for everything it’s doing for you.

Freelance writer Lisa Munniksma is the former editor of Hobby Farms magazine and the writer of HobbyFarms.comās āThe News Hog.ā She left the office for the farm in 2011 and is now part of an organic vegetable and livestock farm in Kentucky. During the winter, she travels to warm climates to learn about farming in other parts of the world. Follow her on Instagram: www.instagram.com/freelancefarmerchick