Curious about adding some tiny bantam ducks to your backyard flock? These three breeds of waterfowl will bring the cute to your home. 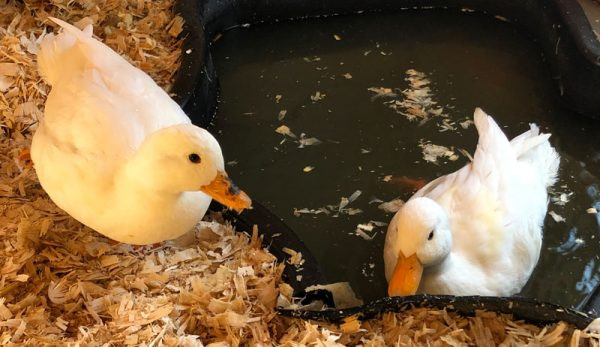 You’ve decided to start your very own duck flock. Congratulations!

If there’s anything more endearing and entertaining than a clutch of chickens, it’s a cluster of quackers splashing around, shaking their tailfeathers, and eagerly exploring their surroundings.

As waterfowl, ducks do have a number of different requirements than chickens. But it is absolutely possible to raise both types of birds happily and healthfully in the same flock … even if your acreage is restricted in size.

Consider one of these three breeds of bantam ducks when you decide to venture into the world of waterfowl rearing.

These delightful little bantam ducks will catch your eye and capture your heart. Their soft, fluffy feathers lack barbicels (as do the feathers of Silkie chickens), adding exponentially to this breed’s plush-toy appearance.

Reaching an adult weight of approximately 2 pounds, Silkie ducks are gentle, friendly and inquisitive birds that make affectionate pets. They forage ably and make short work of the slugs, grubs, beetles and other insects they come across during their explorations.

Available in an array of colors, including black, snowy, grey and white, you probably won’t want Silkie ducks for their egg production. But they more than make up for that with their charm.

Our Silkie ducks were quite content being toted around the yard, happily nestled in our sons’ arms.Â

Enormously popular with waterfowl breeders, Call ducksÂ are the crowned cuties of duckdom.

Fully grown at just over 1 pound, you can easily recognize Call ducks by their large eyes, tennis ball-shaped head, teensy beak and round, compact body.

Their tiny size results from the reason for their domestication. They were the original decoy duck, used by Dutch hunters centuries ago to lure wild Mallards.

These days, Call ducks are raised primarily as exhibition birds, although their ultra-friendly nature makes them perfect pets. While there are multiple varieties of Call ducks, the colors recognized by the American Poultry Association include white, snowy, grey, buff, blur and pastel.

One important note: although the name “Call” is believed to originate with the Dutch kool, or trap, a reference to their role as hunting decoys, Call ducks are also known for their calls. According to duck expert David Holderread, author of Storey’s Guide to Raising Ducks, the Call is one of the noisiest of all duck breeds … something to bear in mind if you have nearby neighbors.

Despite their name, these bantam birds were developed in Pennsylvania.They are the result of cross breeding Mallard, Call and Northern Pintail stock with an unidentified wild Australian duck.

Australian Spotteds inherited the best features from their progenitors. They have the Call duck’s friendly, lovable nature, the Pintail’s teardrop-shaped body, and the Mallard’s hardiness and excellent foraging skill.Topping out at about 2 pounds, the Australian Spotted is also the best layer amongst the bantam ducks. The breed produces between 50 to 125 cream, blue or green eggs per year.

Three varieties are available: greenhead, bluehead and silverhead. All feature the distinctive flecks that give the breed its name.