Looking to spice up your harvest this year? These heirloom cucumbers are anything but boring. 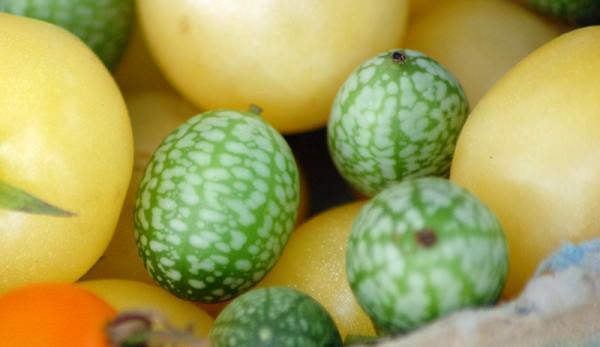 Cucumbers are one of my favorite vegetables to grow for summer salads, but your options aren’t just limited to bushy, vining, pickling and burpless. The long, green cukes traditionally found in grocery stores and at farmers markets are great, but certain heirloom varieties offer options that are as fun to look at as they are tasty to eat.

An old heirloom cucumber from the mountainous Sikkim region of India, the Sikkim cucumber is a distinctive and tasty addition to any garden. These vining cucumbers from the Himalayas produce large fruits whose unique exterior features reddish skin with cracked stripes, producing a giraffe-like pattern. The plants need plenty of moisture, and the cucumbers can reach 2 to 3 pounds at maturity. With a strong cucumber flavor, they’re delicious eaten raw, cooked in stir-fries or pickled.

One of my absolute favorite cucumbers to grow are lemon cucumbers. These delightful heirloom cucumbers were named after lemons because of their vibrant yellow skin and rounded shape, roughly the size of a lemon. However, lemon cucumbers aren’t tart as the name would suggest; rather, they’re sweet and more mild than a traditional cucumber. When cut in half, they reveal white flesh with a bright-green gel containing the seeds. They make a great addition to salads, are perfect for pickling and are delicious straight out of the garden. When harvesting lemon cucumbers, watch for the small black spines that coat the exterior of the fruit. While slightly prickly, the striking contrast of the dark spines against the yellow lemon hue makes this a must-have heirloom in your vegetable plot.

While the lemon cucumber may not taste like its citrusy namesake, tiny Mexican sour gherkin cucumbers do have a sour or tart flavor profile that has been winning over gardeners the last few years. This vining heirloom produces an abundance of small, green, watermelon-shaped cucumbers with light-colored flesh, and they tend to grow well on fences, trellises, and even in hanging baskets. Sour gherkin cucumbers are a little longer than 1 inch and are about the size of very large grape. They make a refreshing and unique treat when eaten fresh off the vine or used in various salads.