You don't have to break the bank to have a functional livestock handling setup, as these three diverse, DIY-designed facilities prove. 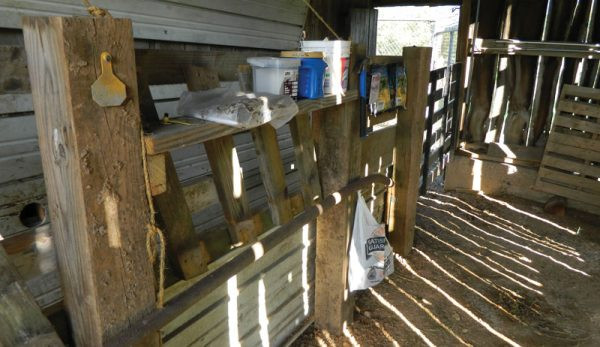 Whether you are just starting out or you are a seasoned farmer, constructing livestock handling facilities that meet your needs and are budget-friendly can be a daunting task. Here‚Äôs how three small farmers with different operations from the Sequatchie Valley of Tennessee accomplished these goals and more.

One look at the gate latches on J.D. Vander¬≠griff‚Äôs Black Angus cow/calf farm near Whitwell, Tennessee, will give you some idea as to the ingenuity that led to the creation of his cattle handling facilities. They are as unique as they are functional and affordable.

Vandergriff, recently retired, has farmed his entire life, first alongside his father and later on his own. He has an affection for repurposing a variety of materials including the recycled lug wrenches he‚Äôs converted into sliding gate latches.¬Ý

It‚Äôs this same thought process that led to the design of his cattle-handling facilities. He spent hours visualizing and sketching out what he hoped to build to match with the materials he already had on hand. Then, he made adjustments to his design as he went by running cattle through it to test what worked and what didn‚Äôt.

The materials in Vandergriff‚Äôs cattle chute are diverse and come from recycled wood, a garage door and a head gate. His father won the latter at a Farm Bureau meeting in the 1960s; Vandergriff found it in the loft of his barn.

Everything has been reutilized. This includes the chain-link gates, given to him by his former employer when they were being replaced with new ones. Same with the existing barn that houses his handling facilities.¬Ý

‚ÄúThe wood [for the chute] is all repurposed lumber,‚Äù he says. ‚ÄúPart of it was from a swimming pool deck for my niece and her husband.‚Äù

Vandergriff has slanted the boards in his chute so that he has different position options to lock the cattle in place. He read research that said cattle work better with a solid wall. But he likes the wood slats on his chute.

They allow him to reach through to the cattle and believes that the construction design still works well to limit their field of vision.

But Vandergriff wasn‚Äôt finished with repurposed materials yet. ‚ÄúThose panels are from a [salvaged] commercial garage door,‚Äù he says. His swing gate at the back of his chute is from part of an old wood stock frame made for a pickup truck. He uses car valves as the pins for that gate.¬Ý

Describing the process he used after cutting the garage door to the appropriate size, he drilled holes and put wood behind the holes in the metal to hold the steel bar he uses to keep the cattle from backing up.

He also built wood shelves to hold supplies on the outside of the chute and a platform to stand on in the event it was needed. Due to its design, Vandergriff can easily work his cattle alone.

Good points aside, he had one chief motivating reason for the design of his facilities. ‚ÄúIt was cheap!‚Äù he says.¬Ý

The only possible downside to Vandergriff‚Äôs facility is his limited ability to work with hooves for trimming, draining abscesses, etc. He hasn‚Äôt had to face this situation yet. But he has a wench system in mind that would allow him to do so.

It‚Äôs difficult to put a price on Vandergriff‚Äôs handling facilities due to the nature of how he obtained his materials. Given the fact that his budget was quite low, though, it would be considered an affordable option for a small farmer.¬Ý

Read more: Want to build a cattle corral for your herd? Check out Temple Grandin’s design.

Young farmer Baylor Layne took a different approach when building his hog barn for his small farrow-to-feeder operation. Layne, 20, was raised on his family‚Äôs farm, also near Whitwell.

Two years ago he decided to take on raising Hereford, Duroc and Yorkshire cross hogs. He drew from his experience working in his family‚Äôs chicken houses as well as with their commercial beef herd.¬Ý

Although he made some design modifications of his own, Layne used a friend and mentor‚Äôs barn as the design template for his 56-by-16-foot farrowing shed.

‚ÄúDad and I built it from the ground up,‚Äù he says. ‚ÄúWe poured the concrete and set the T posts. We set the posts in the ground and poured a 4-inch think concrete pad around the posts. When the hogs rub up against the posts, they can‚Äôt break them.‚Äù

Layne used cattle panels to construct the individual pens. Doors are constructed of plywood and framed with metal tubing. A family member who is a welder lent his expertise to aid in their construction.

All of the wood used in the building‚Äôs construction is treated. It, along with the tin for the roof, was sourced from local building-supply stores.

When Layne first started, he had five pens. Because he and his family provided the labor, the cost of materials (at a manageable $2,600) was his sole expense. His building grew as he learned.

‚ÄúOnce I learned a little more about it, I wanted two weaning pens,‚Äù he says. In addition, he now has a total of six farrowing pens.¬Ý

Layne recommends a 7-by-16-foot farrowing pen for a single sow. But a smaller 6-by-16-foot pen would work for feeding a hog out.

‚ÄúIf I had it to do over, I would make my pens 10-by-20-foot to better accommodate the size of my sows,‚Äù he says. To prevent the possibility of his pigs getting out, he would also exchange the cattle panels on the barn‚Äôs perimeter for 4-by-4-foot sheep panels.

Layne currently has 26 pigs. This includes a boar, five sows and 20 piglets. He makes use of fans and automatic waterers for all. While he hand-feeds the boar and sows, his piglets have automatic feeders.

Because of their smaller size, Layne doesn‚Äôt need to have a true handling facility. He does, however, have a designated area where, using obstetrical chains, he can suspend piglets from a barn post for castration.

For ease of use and working independently, Layne recommends the splurge of going automatic if at all possible. He would eventually like to make his operation entirely automated.

Like Vandergriff, Randy Allen is a lifelong farmer. Fourteen years ago, he sought to diversify his commercial beef operation on his Dunlap, Tennessee, farm by adding a small Kiko meat goat herd.

Initially his plans also included a few sheep. But now he focuses solely on goats. Although some of his females will sell for breeding stock, he sells the majority of his goats at a commercial auction.¬Ý

Although not extravagant, Allen‚Äôs investment in his facilities is the largest of the producers interviewed. In his spare time, he took a hands-on approach to draw out his 30-by-40-foot barn. However, he invested in the expense of having it built.

When his barn was erected in 2006, construction costs were far less. Allen estimates that a similar structure would cost approximately $20,000 to build today.

The barn and its handling facilities have been a learning experience for him. If he had it to do over, he has several things that he would change. The first is an increase in the overall size of the structure to better accommodate bringing in equipment to clean it.

Because he didn‚Äôt want to be in with the goats at feeding time, his original design included a walkway behind the feeders and a separate hay manger. But the kids jump in the trough and older goats sometimes get their horns stuck in his hay manger. So he would like to change the location of the feed trough and take steps to redesign the manger.¬Ý

Allen does enjoy the autonomy that his current facility allows in terms of being able to work his goats independently. But he would also rework the funneling system of gates that he currently uses when working the goats in such a way that it was more encouraging for them to enter the head gate.

Extra expenses aside, Allen recommends one must-have piece of equipment.

‚ÄúIt‚Äôs good to have a working head gate,‚Äù he says. He also recommends kidding pens. ‚ÄúYou need a place to separate them sometimes, especially new mommas.‚Äù

Read more: Goats don’t need complicated shelter, but you should provide these basics to keep them safe and healthy.

Veterinarian Troy Pickett has been practicing out of Kirk Veterinary Clinic in Kimball, Tennessee, for the past seven years. The majority of his farm calls related to livestock come from cattle producers.

‚ÄúIt will be more along the lines of dystocia or some type of respiratory illness,‚Äù he says.

What Pickett considers necessary in terms of working facilities depends largely on the situation. ‚ÄúI can usually make some type of catch area with a rope work if I have to,‚Äù he says. ‚ÄúThe less stress on them the better. I prefer an alleyway with a way to block them in between. I can live without a head gate if I have some type of board to block them with.‚Äù

Although he can work without it, Pickett recommends spending a little of your facilities budget on gates and panels. He has also found that a bud box‚Äîa usually smaller-in-size rectangular box that, by its design, works to encourage cattle to go into a chute or alleyway‚Äîworks well.

Whether your budget is large, small or somewhere in between or whether you are a DIYer, prefer to take a more hands-off approach or a combination of the two, these producers demonstrate that you too can design a livestock handling facility that is right for your situation.¬Ý

Some states, such as Tennessee, have specific cost-sharing funds set aside to assist producers with the construction of livestock handling facilities. Check with your county‚Äôs extension office to see if your state offers assistance.