3 Musts When Harvesting Birch For Crafts

Birch bark can be used for a wide range of projects, but harvest responsibly to avoid damaging the trees. 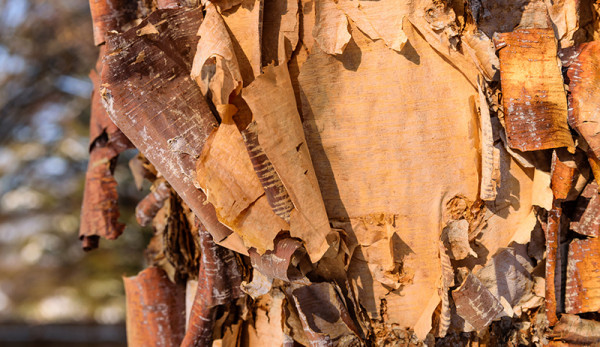 When I heard the news that David Moses Bridges, a┬Ātraditional birch bark canoe builder from the Passamaquoddy tribe, had passed away at the age of 54, my heart sank. He was the type of person youŌĆÖd never forget if you met him once. Few┬Āpeople can build a canoe with their own two hands, and many less know about sustainably harvesting the wood to make it.┬Ā

When I interviewed Bridges┬Āfor a short video I made at Acadia National Park, one of the things that impressed me the most were his words about finding the right materials to make the canoes.

The terrain he traveled to find the right trees was┬Āthick forestland interspersed with flowing water. The land shaped his ancestors’┬Āneed for┬Āthe canoes they made.

Similarly, the ShakersŌĆöknown for their simple and meticulous handicraftsŌĆöcrafted oval birch bark nesting boxes. These are still some of the most popular products sold at places like Shaker Village of Pleasant Hill, in Harrodsburg, Kentucky,┬Āwhere local craftsman┬ĀDavid Kramer makes them by hand. Long before the invention of Tupperware and refrigeration, birch containers were used for food storage.┬Ā

Birch bark itself is a marvel of natureŌĆÖs ingenuity. It is waterproof, solid, flexible, waxy and comes from potentially renewable resources if they are managed appropriately. The naturally occurring fungicide betulin is prevalent in the bark and presumably slows down rotting in food.

Many DIYers today still┬Āwant to make crafts with birch bark and wonder if harvesting it hurts the trees. Girdling a tree will kill it, but fortunately, you’re able to use the peeled bark that natural sheds off. You donŌĆÖt have to pull anything off a living tree to make something like a cute birch-bark vase.

If you are considering a bigger birch bark project, consult these guidelines from the U.S. Forest Service for harvesting bark from a living tree.┬Ā

1. Harvest Only The Outer Bark

Remove only the outer bark from birch, taking care not to damage the inner bark. The inner bark, aka the phloem, is where sugars and other materials made in the leaves are transported to other parts of the tree to aid in┬Āgrowth and respiration. Removal of the inner bark, aka girdling, interrupts this flow and kills the tree by starving the roots.

This is common┬Āto determine if the bark is suitable for a particular project. Make a right angle incision into the outer bark at a place that will not affect the larger piece of bark. Each side of the test flap should be long enough that the flap can be peeled back far enough to check for the qualities you’re looking for: flexibility, thickness and tendency to separate into layers.

3.┬ĀRemove┬ĀOuter Bark Only When It Comes Off Easily

This usually takes place in the first part of the growing season, when the bark literally jumps off the tree when the vertical incision is made. When the outer bark peels readily, all that is required is a vertical incision through the outer bark, which is usually less than 1/4┬Āinch thick. Bark incisions horizontal to the stem of the tree are not necessary if the bark is removed at the correct time of the year. It is sometimes recommended that the incision be made at an angle less than 90 degrees to the tree.

Bridges shared this┬Āintimate connection with the land with┬Āhis ancestorsŌĆöand hopefully his descendants will carry on the tradition.┬ĀOther┬Āfolks are educating each other on these practices, as well. ItŌĆÖs one thing to want to mimic indigenous crafts for the sake of function and beauty, but it can become so much richer and more rewarding to connect the craft to its environment and the people who developed it through lengthy and complex relationships.