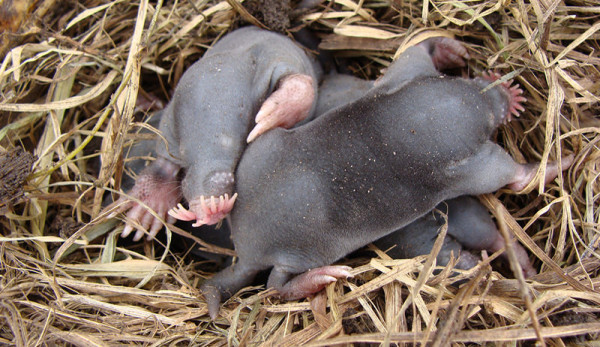 Lumpy soft spots, barren of vegetation, coursing through your garden or fieldsābeware of jumping to the conclusion that youāve got moles and that you need to swiftly eradicate them. Before you react to any type of so-called āvermin,ā take the time to understand what a mole is, what it is not and how it impacts your land.

Myth No. 1: Moles Are Blind Rodents

Moles are not rodents at all, which means they arenāt constantly gnawing to keep their teeth from growing. In fact, moles and shrews have spike-like teeth, not flat-tipped ones like mice, which are rodents. Moles are specially designed for their underground lifestyle.

Molesā eyes have a thin layer of skin covering them to keep dirt from getting in them, and their small eyes can see light, shapes and movement. They arenāt blind, and they arenāt deaf either, but their ears are even less obvious than their eyes because they donāt have any openings. Moles sense sound vibrations through the soil with a very sensitive and fragile skull.

Other sensory adaptations that make moles perfectly suited for a subterranean existence include their digging paddle-like front paws, fur that can move forward or backwards, and specialized snouts that help them feel and smell around in the dark soil. Some types of moles may actually smell in stereo, receiving detailed signals through each nostril to help them navigate to food.

Moles are insectivores, so the only reason they are interested in your plant roots is for the worms, grubs and other soft-bodied insect larvae who live among the roots. Moles may eat more than half of their own body weight in earthworms in a day. They collect even more than they can eat, bringing them back to a special burrow for food storage. To keep the worms fresh yet immobilized, they bite their heads off and save the living bodies for later.

Mole trails may run through your lawn, garden or farm, but they werenāt created by an army. Just threeĀ to five of these tiny mammals will occupy an entire acre. They are solitary creatures that only get together when itās mating time and then to nurse pups (baby moles) for about a month. It may seem like more than a couple of moles are wreaking havoc under your crops because each one makes tunnels near the surface for traveling and also digs deeper burrows for nesting and feeding.

If your plants are disappearing, and hundreds of crescent-shaped mounds of dirt are appearing, you may have gophers to blame, not moles. Mole holes have a more conical shape to their dirt mound, and are generally less destructive to plants. Voles, on the other hand, are a type of mouse that eat plant roots, burrow and also use existing mole tunnels. Ā

A mole may not be what you thought it was, which is often true for the world of wildlife in your garden. Moles might disturb roots while hunting and creating their traveling tunnels, but keep in mind that these natural predators are maintaining your grub populations while aerating your soil. Educate yourself about the smallest mammals in your garden community to understand their role in the larger system.