3 Problems that Could Ruin Your Garlic Crop

Watch out for these top diseases and pests that threaten your garlic crop and could keep you from growing this culinary favorite for years to come. 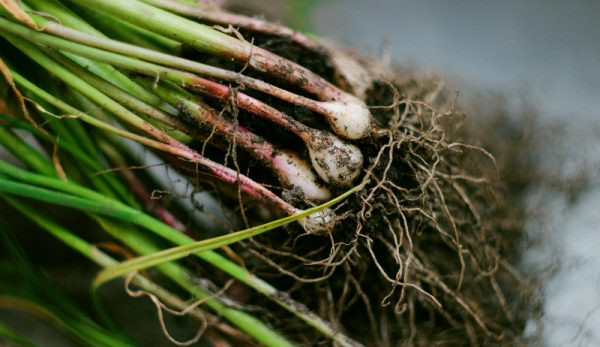 Garlic beds are subject to many possible problems, and growing garlic could be a limited opportunity for each farm. If land has experienced disease or pest problems, farmers might not be able toô plant garlic until after several decades of crop rotation. If either white rot or nematodes have caused serious problems with a crop, those fields are usually best left to non-allium crops.

The most problematic disease of the garlic industry is white rot (Sclerotium cepivorum). This fungal disease strikes all allium crops, includingô onions and garlic. The leaves of white-rot-infected garlic plants yellow, die back partially and wilt. The roots also rot, allowing infested plants to be uprooted easily. In the soil, a white fungal mycelium develops and then produces a number of round black sclerotia, the size of pinheads. It is typical to see the development of white rot from mid-season to harvest.

White rot sclerotia can lie dormant in soil for 20 to 40 years, waiting to detect the scent of a growing allium root to break their dormancy. These sclerotia are not wind or water borne, but are most frequently relocated by farmers moving onions, garlic or contaminated soil or tools.

Small growers can avoid major trouble and keep the white rot under control by constantly looking out for and pulling any diseased plants that appear in their fields. Disease garlic plants have wilted and will usually be in sporatic groups of a few plants.

“Very careful inspection in the early stages of infestation is an effective control practice, but it will likely need to be sustained forever,ã explains Crowe. “Once populations have built to moderate or higher levels, white rot is nearly impossible to control.ã

Of course, strict sanitation and using disease-free planting material is also key. Some growers further combat white rot by applying garlic-scented materials to the unplanted fields. These odiferous treatments cause dormant sclerotia to emerge and then die when they find no plants to infect, but this treatment only works on fields that have not had an allium crop planted on them for at least six months. Crowe recommends using a mix made from the juice of 10 pungent onions for every 50 gallons of soil drench (a pesticide treatment), and encourages two or three applications before the field is replanted to garlic or other alliums again.

The second nastiest and certainly the sneakiest of garlic problems is the stem and bulb nematode Ditylenchus dipsaci. This microscopic (adults are 0.9 to 1.8 mm long), wormlike animal is endoparasitic, meaning it lives inside its host. The nematode lives and reproduces inside garlic plants, eating parts of the stems, leaves and bulbs. It is capable of living without water and can survive for several years in the surrounding soil. Sometimes the growth of the garlic plant is not affected significantly, but the bulb quality is reduced due to tissue breakdown, deformation or discoloration.

The nasty part of garlic nematodes is that the populations of this pest usually build up for several seasons without visible damage. Healthy garlic plants can tolerate moderately large densities of these nematodes without a significant drop in production, then all at once, populations can reach a level in which the entire crop can be destroyed in a single year.

Getting clean planting material is the first step in the fight against nematodes. Because garlic seldom produces seed, cloves or bulbils must be used to propagate the crop, and these always have the possibility of carrying nematodes. Commercial growers can use sources that rigorously screen the seed fields for nematodes, but small-scale growers have a harder time finding guaranteed nematode-clean stock.

Onion thrips are a garlic plantãs most common insect pest. Thrips rasp the leaves to acquire sap, causing damage that slows growth and bulb production. Severe thrip damage can cause the plants to wilt and die. In general, thrips begin to enter garlic fields when the weeds in neighboring fields start to dry. Growers usually monitor thrip migrations with sticky traps in their fields.

This article first appeared in the December/January 2004 issue of Hobby Farms magazine.