3 Reasons To Graze With Care This Spring

Spring's forages are springing forth, so manage your livestock carefully for the best health for your animals and your land. 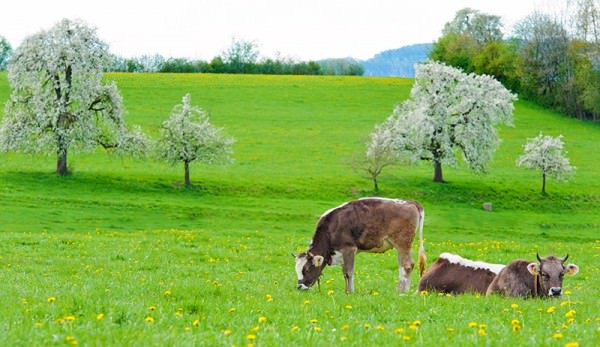 All of the bright-green growth spreading across pastures in much of the U.S. this time of year looks pretty to farmers and looks delicious to livestock. The forbs, legumes and grasses that are awakening from their winter sleep are full of nutrients and moisture, which sound like they’d be great for your animals. In springtime grazing, though, there is definitely too much of a good thing. All of this forage will be available for the grazing over the coming months if you graze with a plan in mindâ€”and that plan is not to simply turn out your cattle, horses and sheep until they’ve had their fill. Animals grazed with reckless abandon can develop serious health issues. Know these three grazing issues so you can first prevent them and then recognize and treat them as quickly as possible.

Low levels of magnesium in the blood are to blame for grass tetany. In the spring, cool-season grasses tend to have high protein and potassium content but low magnesium content. This happens because an imbalance of nutrients in the soil, or wet, heavy soils with low oxygen levels can tie up magnesium and prevent its uptake by rapidly growing grasses.

You will most often see grass tetany in warm periods that follow five to 10 days of cool, cloudy, wet weather, because this is when grass is growing most rapidly and is less able to draw sufficient magnesium from the soil.

Animals with grass tetany separate themselves from the herd, go off feed and show nervous-system symptomsâ€”aggression, muscle twitches around the face and ears, teeth grinding, excessive urination, staggering, incoordination, stiff walk, starry-eyed gaze. In advanced cases, a cow or sheep will collapse and have convulsions. It might go into a coma and die. The time period from the onset of symptoms to death can be very short.

Donâ€™t start grazing your animals until grass is 6 to 8 inches high, and provide them a high-magnesium mineral supplement at least one month before spring grazing begins. Be sure your pasture land has a balanced nutrient content for rapidly growing grasses. Take a soil test every year or two, in the autumn, and amend pastures as needed. Add legumes to your forage mix, as they tend to be higher in magnesium anyway.

Oral magnesium or magnesium/calcium paste can be used to treat grass tetany, but call your veterinarian immediately. Once the condition has progressed to the point of the cow or sheep being down in the field, treatment may not be effective.

This digestive issue comes from carbon dioxide and methane gas buildup in the rumen and reticulumâ€”the first two compartments of a ruminant’s stomach. These gases are produced in normal rumen functioning and usually released through belching, but if an animal is unable to belch, pressure builds and the animal can’t expand its diaphragm to breathe. Pasture and frothy bloat follow the same idea, though the gases are trapped in a foam in the stomach that leads to suffocation.

Bloat can begin as quickly as 15 minutes or as long as 48 hours after being turned out onto lush, spring legumes.
Animals will become visibly uncomfortable and stop eating. In severe cases, the animal’s left (rumen) side will be distended from all of the gas trapped inside. It will urinate and defecate often, bellow, and struggle to walk. Death can occur in as little as one hour or up to four hours.

Bloat occurs on legume pastures, not grass, so you can plant pastures with a grass-heavy mix of legumes and grasses, and plant birdsfoot trefoil, a legume that doesn’t cause bloat. Before turning your animals out onto pasture for grazing, feed hay so they have something in their stomachs and do not overeat the lush forage. Put animals on new spring pastures for limited periods of time, and allow them to work up to longer periods as they become accustomed to the forage. Itâ€™s also helpful to wait until frost, dew or rain has evaporated before turnout, as these can increase the incidence of bloat.

If you suspect bloat in one of your animals, take it off of pasture immediately and offer it hay. Encourage the animal to walk, which can help promote burping. More often than not, the animal will relieve itself. If you’ve never dealt with bloat before, you should call your veterinarian for advice on how to move forward. Your veterinarian may want to insert a stomach tube to relieve pressure, give a mineral-oil drench or, in serious cases, insert a trocar, puncturing the rumen from the outside.

An animal suffering from prussic acid poisoning breathes heavily and quickly. Its nose and mouth may fill with foam, and it may lose control of urination. As the condition progresses, the animal will show signs of depression, an inability to stand, severe difficulty in breathing and then death. These symptoms can set in within minutes of grazing a forage that’s high in prussic acid and slightly longer if the acid is being produced in the rumen.

Young sorghum-type plantsâ€”including grain sorghum, forage sorghum, sudangrass, sorghum-sudangrass, Johnsongrass and sweet sorghumsâ€”have a high amount of hydrocyanic acid, which can poison livestock. Also called prussic acid, it can also form in the leaves of sorghum-type plants that are stressed. It’s also possible for this acid to form in the rumen after the animal grazes these plants. The acid inhibits an enzyme that links oxygen with red blood cells, causing asphyxiation.

Donâ€™t graze animals on young sorghum-type plants or those that are under stress, such as during a recent drought, freeze, haying/mowing or heavy grazing. If your pasture has these types of plants, feed your animals grain before turning them out. Bear in mind that sorghum-type forage hay that’s been thoroughly cured or ensiled is usually safe to feed.

Prussic acid poisoning can be treated with methylene blue solution, sodium nitrate or sodium thiosulfate given intravenously. If you are grazing sorghum-type forages, talk with your veterinarian about having this treatment on-hand and get training on its use, as it may be too late if you have to wait for a vet to arrive and administer treatment himself. Also discuss the difference between prussic acid poisoning and nitrate poisoning, as the sodium nitrate and sodium thiosulfate remedies will kill an animal suffering from nitrate poisoning, which can look similar.

As spring forages emerge, be mindful of managing your animals and your forages. What looks lush and lovely could also cause major health issues that you don’t want to deal with.