3 Strategies for Sticking to Farm Resolutions

What one does is what counts. Not what one had the intention of doing. —Pablo Picasso 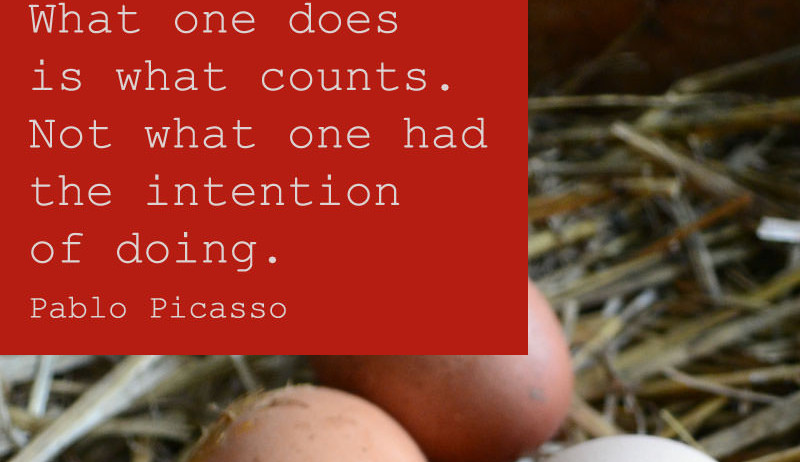 As the years are wont to do, 2014 is just flying on by. It seems like just yesterday America was battling the sub-zero temperatures of the polar vortex, but it was already a full month ago. Although if you ask me, this whole winter has basically been one giant waxing and waning polar vortex—spring can’t come soon enough. I can only handle so many frozen car doors.

And as I am wont to do, I made New Year’s resolutions for 2014, despite telling myself in December that I was finished with making pledges that I inevitably break in the months to come. But I find myself in early February, again forced to evaluate how I’ve done on my promise to work out three times a week. Spoiler alert: the results were grim. (Granted, another of my resolutions was to use the baked doughnut pan I bought last year more frequently in 2014, and I’ve definitely been following through on that one, so this year is far from a total loss.)

Whenever I confront my stalled or failed New Year’s resolutions, I always think about intention, and try to rationalize that I had the intent of working out three times a week in January, and that must count for something, right? But Pablo Picasso’s quote above, harsh as it may initially seem, really cuts to the core of my rationalization: thinking about going on a run isn’t going to accomplish anything for me. Only following through on my intended actions is going to benefit me in the long run?pun entirely intended.

I’d bet that most of you have a few failed resolutions for 2014, too; if not, congratulations on following through with your self-betterment! (The temptation is to be snide and remind you that there are 11 months in the year to go, but instead, I’ll ask you to share your tips for sticking to your pledges in the comments. I only ask that you don’t rub it in.)

Maybe you wanted to draw up plans for a new chicken coop or spend time working on your farm website in the off-season, but you haven’t gotten around to it yet, or maybe you wanted to start plants in soil blocks to transplant in a few weeks, but time is slipping away. Don’t lose hope—a delayed resolution isn’t dead yet!

How can we turn resolutions and intentions into actions and accomplishments? Let me share what I’m trying to do to jumpstart my stalled resolution:

Take these steps, obvious as they may seem, and apply them to your resolutions: The more planning you put into a resolution, the firmer your intent to follow through with it becomes, and though your actions may be what counts, you can’t complete an action without intention. Now, if you’ll excuse me, I’m off to make one last batch of doughnuts before I go tackle a run—just because I’m planning to follow through on one resolution doesn’t mean I need to ignore the others!