3 Tips For Improving The Art Of Home Cooking

Break outside the recipe box and have more fun with your cooking. What better dish to test your culinary creativity than with a pot of chili? 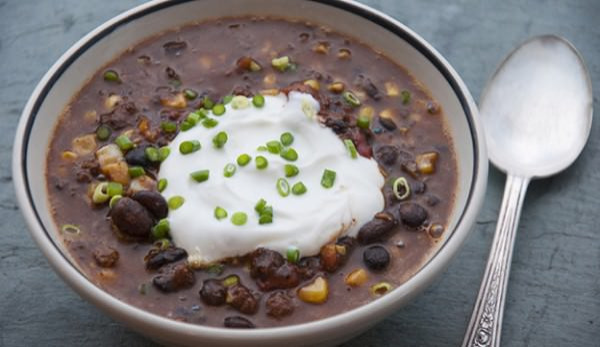 If youâ€™re like us, you often find yourself in a recipe rut. Cooking grows to be more of a chore when you fall into robot mode, blindly following recipe instructions. Itâ€™s times like these when you need to take a renewed look at your kitchen, viewing it more as an art studio than a food-prep workspace. When you do, your daily meals become palettes on which to create and express yourself. Your ingredients turn into trusty implements, helping you to explore new textures, colors, scents and flavors. Cooking can be as creative as your imagination allows.

For inspiration and practical tips on blending the artful and practical sides of food preparation, we turn to our friend, Brett Olson, creative director and co-founder of Renewing the Countryside, a nonprofit that champions positive stories of rural revitalization and local food.

Olson is adept at merging the worlds of art and edibles, and he practices it in his home kitchen everyday. He treated Lisa to some of his chili when she stopped by for a visit recently, and she asked him his top tips for channeling culinary inspiration.

“When I was in art school, a common practice was to study paintings by master artists and model their technique,â€ť Olson says. “This isnâ€™t copying, but rather experiencing different perspectives to better understand and identify your own voice.â€ť

The same principle holds true in cooking: Take any opportunity to observe and learn from others. This could be watching a chef on a cooking TV show or hanging out in the kitchens of well-seasoned home cooks, like Olson. Take the insights you gather during those experiences, and try them out in your own home.

“Trading in a few ingredients on a recipe for some of your own can be an easy way to warm up to cooking out of the box and off the recipe card,â€ť Olson says. Try substituting a different herb in the same general family, like trading basil for tarragon. Or add in more of one of your favorite ingredients, such as a full teaspoon paprika instead of a half teaspoon.

And if your attempt fails, donâ€™t loose heart. “Plenty of paintings end up being scraped off the canvas and into the trash,â€ť Olson says. “If your culinary chili experiment goes ‘bad,’ scrape it off and chalk it up to experience!”

As you cook, sample and adapt along the way.

“Unless youâ€™re into paint-by-numbers, any artist will always be playing around with adding and subtracting color until itâ€™s just right from his or her eyes,â€ť Olson says. “Sometimes you might add too much of something, but you can balance that with throwing in something else. Same concept with cooking. The end result is youâ€™ll identify your secret ingredient that makes your culinary creation uniquely your own, memorable and tasty.â€ť

While, of course, Olsonâ€™s chili doesnâ€™t have an exact recipe, Lisa did cajole him to break down the preparation into five steps. If you need a general guide to follow as you wean yourself off of recipes, his instructions are good to follow.

Get more chili recipes from HobbyFarms.com: