3 Ways To Bird-Proof Your Windows

Protect the wild birds around your home with things that will prevent them from flying into your windows. 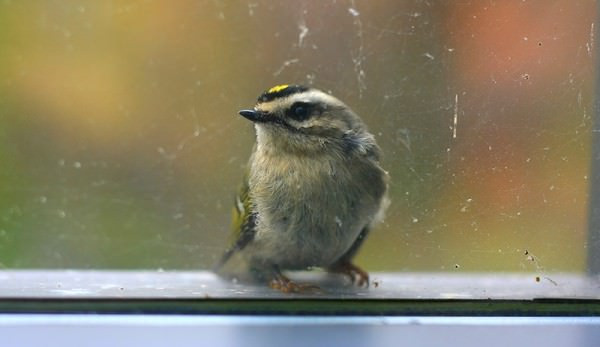 A 2014 article in Science News¬†provided some disturbing statistics on the relationship our feathered friends have with windows. While our invasive feline companions lead the way in wild-bird mortality, killing up to 3.7 billion wild birds annually, windows are not far behind.

In the U.S., it is estimated that between 365 million and 988 million birds a year‚ÄĒmostly migratory songbirds‚ÄĒmeet their end by crashing into a pane of glass. Over half of those deaths occur on the windows of buildings less than 11 stories high, so it‚Äôs not skyscrapers doing the bulk of the damage. Single-family homes shoulder a sizable portion of the blame. Fortunately, there are some simple solutions that can help birds establish a better sense of depth perception in the face of an otherwise invisible opponent.

A frosted window pattern, mesh, lattices, netting, window films, decals and even strips of tape can give birds a little more data about what lies ahead in the negative space. Although this can complicated the view from the inside, it may be worth installing in periods of peak migratory bird traffic.

Deterrents can also help. They come in the form of an artificial bird of prey, whether that be a window decal of a falcon or a plastic owl. These don‚Äôt fool every bird, though, so they may not totally prevent collisions.

For the amateur ornithologist‚ÄĒor anyone who appreciates seeing wildlife up-close‚ÄĒthe most rewarding solution is a window-mounted bird feeder. For indoor cats, a window-mounted feeder is basically television. Instead of compromising the view of nature, this will bring nature right up close for observation and give birds a safe place to slow down and land while having a bite to eat.