4 Alternatives To Capers You Can Grow At Home

While you can keep the Mediterranean-grown capers in a pot indoors, these more common garden plants can be wonderful substitutes. 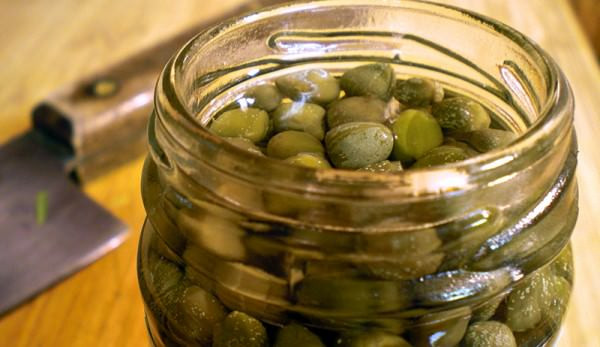 Salted, pickled, often found adding a piquant punch to mediterranean cuisine and a vital ingredient in tartar sauce, capers are one of those botanical products that many people arenâ€™t quite clear about exactly which part of the plant theyâ€™re eating. Up until a few years ago, I had the odd conviction they somehow came from the ocean. (I think I thought they were a kind of seaweed.)

Capers are actually the preserved, unopened flower bud of a plant called the Flinders rose (Capparis spinosa), which is not a rose at all. Caper berriesâ€”less commonly used in cookingâ€”are the seeds.

The caper bush a small shrub that thrives in rocky, dry coastal soils in full sun, but much like tea tree, citrus or bay laurel, it can be cultivated in a pot by gardeners living outside of a Mediterranean climate (zones 8 to 10), who also possess a willingness and space to lug a putted shrub indoors in winter.

However, since capers are in actuality just pickled flower buds, thereâ€™s no reason to not experiment with more bioregionally appropriate fare. Here are some other plants whose flower buds can be harvested and preserved in a similar manner.

Majoram (Origanum majorana) is a kind of oregano that has lemon and pine undertones. There is no rule saying majoram is the only kind of oregano that can be used for capers, but pickled garnishes made from the buds of this plant are delectable enough to have been posted as a recipe once before in Hobby Farms magazine. Follow the instructions here for processing any of the plants below, as well.

An edible landscaping favorite, every part of the garden nasturtium (Tropaeolum majus) is edible. Called â€śpoor manâ€™s capers,â€ť green nasturtium seed pods are often pickled and used in dishes that call for the real deal.

Cilantro seeds, aka coriander (Coriandrum sativum), can be harvested while green, and much like nasturtium seeds, they can be pickled to resemble capers. They have a strong citrus-like flavor that compliments curries and salsas alike.

Underappreciated as a superfood, dandelions (Taraxacum officinale) can be foraged in just about any temperate zone. The flower buds, if picked while still tightly closed, are easily pickled. They have a unique flavor that is similar enough to capers, but still has a unique aroma.

Beyond these more well-documented caper-alternatives, there is ample room for experimentation. Wherever there are edible flowers or green seeds to be found, there are possible opportunities for making delicious little pickled garnishes.